What is Production Possibility Curve?

What is the production possibilities curve?

In business, the Production Possibility Curve (PPC) is applied to evaluate the performance of a manufacturing system when two commodities are manufactured together. The management utilizes this diagram to plan the perfect proportion of goods to produce to reduce the wastage and cost while maximizing profits.

The diagram or graph explains how many units of goods a company can produce if all the resources are utilized productively. Therefore, a single commodity’s maximum manufacturing probability is arranged on the X-axis and other on the Y-axis. Here, the curve is represented to show the number of products that can be created with limited resources and pausing the use of technology in between.

In the graph, the line sloping down also depicts the tradeoff between producing commodity A and commodity B. When a firm diverts its resources to produce commodity B, the production of commodity A will reduce.

A point above the curve indicates unattainable with the available resources. A point below the curve means the production is not utilizing 100 per cent of the ‘business’s resources.

Related link: What is Demand? 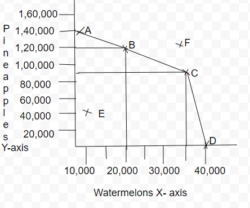 You might want to know: What is Consumer Equilibrium? 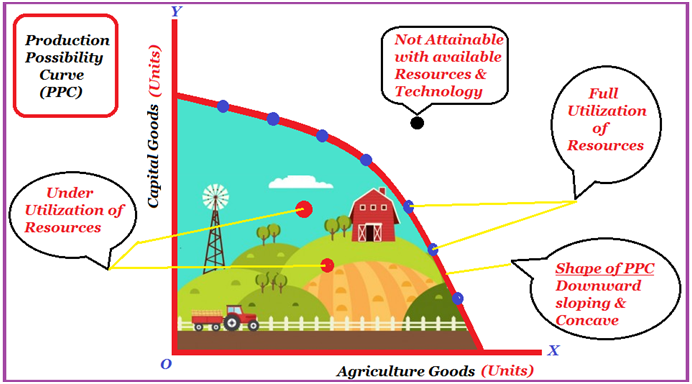 Must Read: How to Study Economics Effectively

The above-mentioned concept explains what is the Production Possibilities Curve. To know more, stay tuned to BYJU’S.