Slope of the Demand Curve

In the language of Economics, demand is referred to as the consumers’ desire to own goods or services. Price is one of the most important factors of determining the demand for a good or service.

What is Demand Curve

Law of Demand states that with all other factors being constant or equal, the price and quantity demanded of any product or service will be inversely related to each other. In other words, with increasing price the quantity demanded will decrease and vice versa.

The graphical representation of a demand curve is as follows: 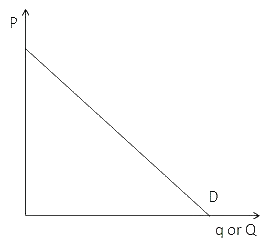 The law of demand is applicable to most of the products and services, with certain exceptions such as Giffen goods and Veblen goods.

Giffen Goods: Giffen goods are named after the Scottish economist Sir Robert Giffen. Giffen goods are those goods which are consumed more when there is a rise in their price. It means that the quantity demanded increases in relation to the increase in price of the product. Such goods are generally staple items that are consumed by the population like rice, bread, etc.

Veblen Goods: Veblen goods are the second exception to the law of demand as these are high quality goods that are items of luxury for affluent people. These goods are regarded as status symbols and the consumption of such goods will increase with a corresponding increase in their price. It was named after American sociologist Thorston Veblen.

This was all about the topic of Slope of Demand Curve, which is an important topic of Economics for Commerce students. For more such interesting articles, stay tuned to BYJU’S.