Circular Flow of Income and Methods of Calculating National Income

What is Circular Flow of Income?

The circular flow means the unending flow of production of goods and services, income, and expenditure in an economy. It shows the redistribution of income in a circular manner between the production unit and households.

These are land, labour, capital, and entrepreneurship.

Additional Reading: What are the Types of Banking

Circular Flow of Income in a Two-Sector Economy

It is defined as the flow of payments and receipts for goods, services, and factor services between the households and the firm sectors of the economy. 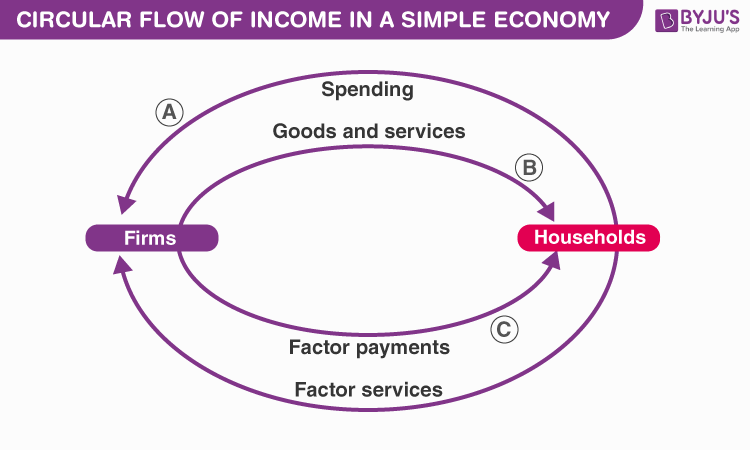 There are three known methods by which national income is determined. These are:

Let us look into the details of each of these methods.

The value added method is also known as the product method or output method. Its primary objective is to calculate national income by taking the value added to a product during the various stages of production into account.

Therefore, the formula for calculating the national income by the value added method can be expressed as:

Therefore, the formula for calculating the national income by the expenditure method can be expressed as:

The third method to calculate national income is the income method. It is based on the income generated by the individuals by providing services to the other people in the country either individually or by using the assets at disposal.

The income method takes the income generated from land, capital in the form of rent, interest, wages and profit into consideration.

The national income by income method is calculated by adding up the wages, interest earned on capital, profits earned, rent obtained from land, and income generated by the self-employed people in an economy. It is known as net domestic product at factor cost or NDPfc.

The addition of the net factor income from abroad to the net domestic product at factor cost gives the national income.

It can be expressed in a formula as:

Classify the following as stock and flow:

The above-mentioned concept is explained in detail about the Circular Flow of Income and Methods of Calculating National Income. To know more, stay tuned to our website.