What is an Amine?

Amine is a type of compound that is derived from ammonia (NH3). In other words, we can simply say that amines are derivatives of ammonia. We study about amines in Organic Chemistry, and they are basically classified as functional groups or organic nitrogen compounds that contain a nitrogen atom with a lone pair. Generally, in amines, hydrogen atoms are substituted by an aryl or alkyl group. Some of the naturally occurring amines include alkaloids found in certain plants; catecholamine neurotransmitters (i.e. dopamine, epinephrine, and norepinephrine); and a specific chemical mediator, histamine, existing in most animal tissues. Common examples of amines include amino acids, trimethylamine, and aniline. Meanwhile, inorganic ammonia compounds such as monochloramine (NClH2) are also called amines.

Amines naturally occur in hormones, vitamins, proteins, etc. They can also be prepared synthetically which we will discuss in detail below.

If we look at the amine molecule, it will display a shape that of a flattened triangular pyramid wherein the nitrogen atom is at the apex. There is an unshared electron pair that is localized above the nitrogen atom. In the case of quaternary ammonium ions, a substituent occupies this region and somewhat forms a regular tetrahedron with the nitrogen atom located at the centre.

Alkylamines consist of tetrahedral nitrogen centres. Here the C-N-C and C-N-H bond angle is 109 °. The distance between C-N is smaller compared to the C-C range. The amines can also have a chiral property where the centre of nitrogen holds four replacements that create the lone pairs.

Nitrogen almost has a planar structure in aromatic amines (“anilines”). This is due to the mixture of the lone pair with the aryl substituent. The C-N range is shorter. For aniline, the distance between C-N is the same as the distances between C-C. 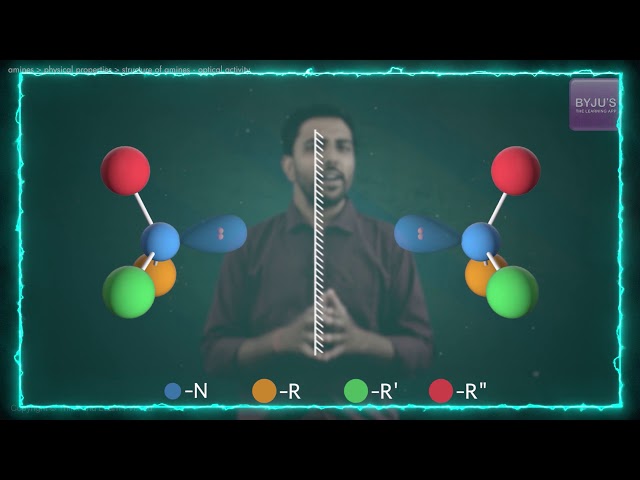 Amines are usually categorized into different types based on their nature. They are usually classified as aliphatic amines (having only Hydrogen and alkyl substituents) and aromatic amines (the nitrogen atom is connected to an aromatic ring).

Furthermore, amines, aryl and alkyl are also divided into three subcategories based on the number of carbon atoms that are connected to nitrogen or how many hydrogen atoms are substituted. They are as follows; 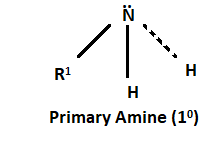 Primary amines are formed when one hydrogen atom in ammonia is substituted by an alkyl or aromatic group. Some examples of primary alkyl amines include amino acids and methylamine while primary aromatic amines include aniline. 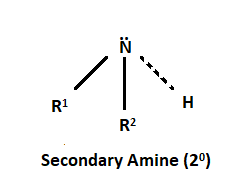 Secondary amines are those amines that have two organic substituents either alkyl or aryl ones or both. They are bound to the nitrogen together with one hydrogen. A common example includes dimethylamine. Likewise, diphenylamine is an example of an aromatic amine.

Tertiary amines are those where the nitrogen consists of three organic substituents. Examples of this type of amine are trimethylamine and EDTA. 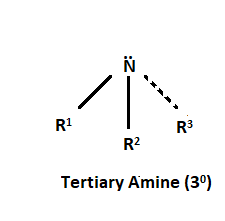 Interestingly, there is also a fourth sub-category of amines known as cyclic amines. These are based on the connectivity of the substituents attached to the nitrogen. However, cyclic amines are basically secondary or tertiary amine types. Examples include the six-membered ring piperidine or the 3-membered ring aziridine.

Quaternary amines are those where the nitrogen consists of four organic substituents and bears a positive charge. 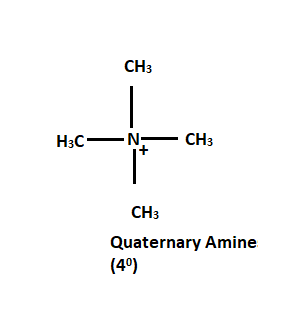 The oldest and most typically used alkane series naming system is to classify every cluster connected to the gas atom so add the ending-amine, as in methylamine, CH3NH2; N-ethyl-N-propylamine (or ethyl(propyl)amine), CH3CH2NHCH2CH2CH3; and tributylamine, (CH3CH2CH2)3N.

Any or more of the listed groups are in alphabetical order; Ns or inner brackets are used to illustrate what groups are bound to nitrogen rather than to each other.

Numerous fragrant amines and most cyclic amines have unimportant (non-deliberate) names (e.g., aniline) that might be utilized as a parent to assign the other associated, as in N, N-dimethylaniline.

An alternative method substitutes a hydrocarbon name’s terminal -e with the suffix-amine for the functional group −NH2. The largest group is chosen as the parent of secondary and tertiary amines, and the other groups are designated as substituents. 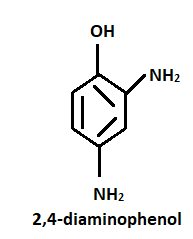 Preparation Of Amines and Reactions

There are several methods that are used for the preparation of amines. Two widely used methods include:

Industrially, amines are prepared by the alkylation of alcohols from ammonia.

Acylation is a process that involves a reaction between chlorine, anhydride, and an ester. It is a type of nucleophilic substitution reaction. The reaction involves the substitution of the hydrogen atom by an acyl group.

We will consider the reaction between methenamine and benzoyl chloride which results in the formation of hydrochloric acid and N-methylbenzamide.

Primary amines are also prepared by Gabriel synthesis. During this process, phthalimide is treated with ethanoic potassium hydroxide. Potassium salts of phthalimide are formed and then it is heated along with alkyl halide. This is followed by alkaline hydrolysis which results in the formation of primary amine.

There are two common ways to reduce the nitro compound:

This approach cannot be used if there is also some other readily hydrogenated group in the molecule, such as a double bond with dioxide carbon. The most effective chemical treatment is by applying hydrochloric acid to a mixture of nitro compound and metal, usually granulated tin or iron.

Nitriles may be reduced to primary amines by lithium aluminum hydride (LiAIH4).

Amides yield primary amines by lithium aluminum hydride reduction, whereas N-replaced and N-replaced amides produce secondary and tertiary amines, respectively. Since amides are readily prepared, their reduction is a favoured method for the making of all amine groups. 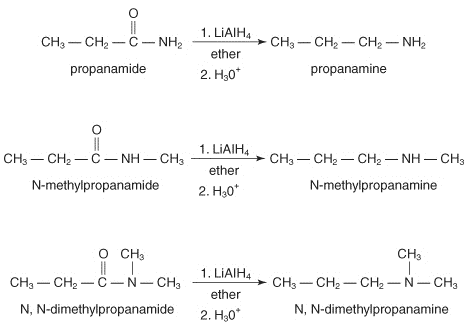 Reductive Amination of Aldehydes and Ketones

Catalytic or chemical reactions in the presence of ammonia or primary or secondary amines may eliminate aldehydes or ketones, resulting in primary, secondary or tertiary amines. A ketone’s reaction with ammonia, followed by sodium cyanoborohydride’s catalytic reduction or degradation, produces a 1 ° amine.

N-replaced amines are generated by ketone reaction with primary amines, followed by reduction.

N, N-replaced amines can be produced by 2° amine reaction with ketones followed by reduction.

The formation of imine is an important reaction. Usually, primary amines tend to react with ketones and aldehydes to produce imines. When we take formaldehyde (R′ = H), the products generally exist as cyclic trimers.

When these imines go through reduction they form secondary amines:

Similarly, secondary amines can also react with ketones and aldehydes to form enamines.

Unlike ammonia, amines serve as bases and are reasonably strong (for some examples of Ka conjugate acid values, see the table provided). The basicity of amines varies by molecule and largely depends on: the presence of the lone pair of nitrogen electrons

The electronic properties of the substituent groups attached (e.g., alkyl groups increase the basicity, aryl groups decrease it, etc.) the degree of solvation of the protonated amine, which mostly depends on the solvent used in the reaction. Simple amine water solubility is largely due to the hydrogen bonding capacity that can exist between the protons on the water molecules and these lone electron pairs.

We usually consider amines as bases, but remember that 1o and 2o-amines (not 3o-amines without N-H protons) are also weak acids ( pKa value of ammonia is 34). In this regard, it should be noted that, as in the previous section, amine’s acidity is measured by the pKa rather than its conjugate acid.

The relevance of all these acid-base relationships to functional organic chemistry lies in the need for differing intensity organic bases as reagents suited to the particular reaction requirements.

In many organic solvents, the common base such as sodium hydroxide is not soluble and is therefore not commonly used as a reagent like organic reactions. Alkoxide salts, amines or amide salts are the bulk of the base reagents. Since alcohols are much stronger acids than amines, they have weaker conjugate bases than amide bases and fill the gap between amines and amide salts in the base strength.

Factors that Affect the Basicity of Amines

Basicity of Amidines and Guanidines 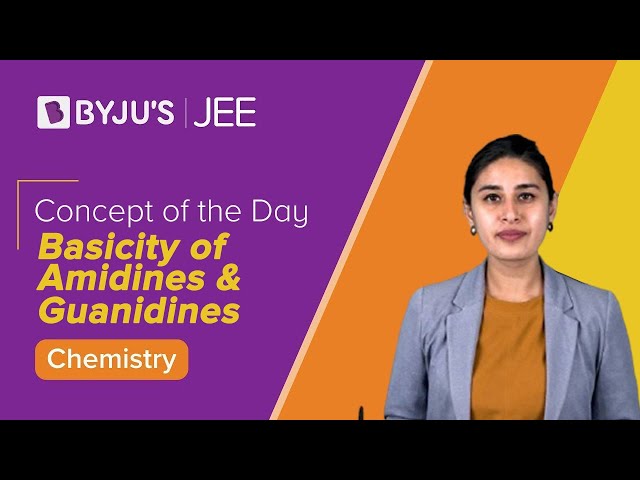 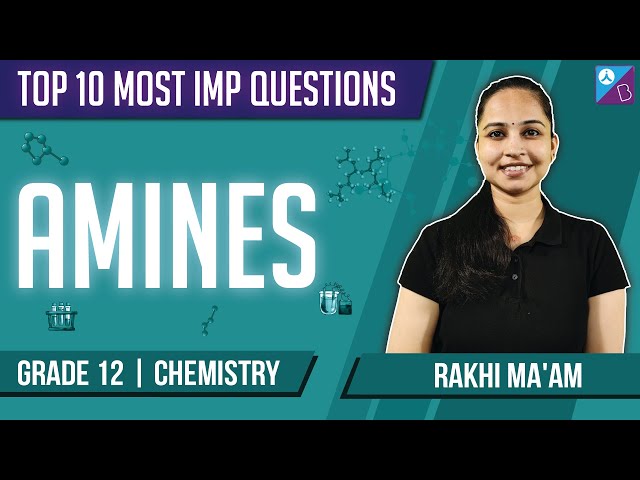 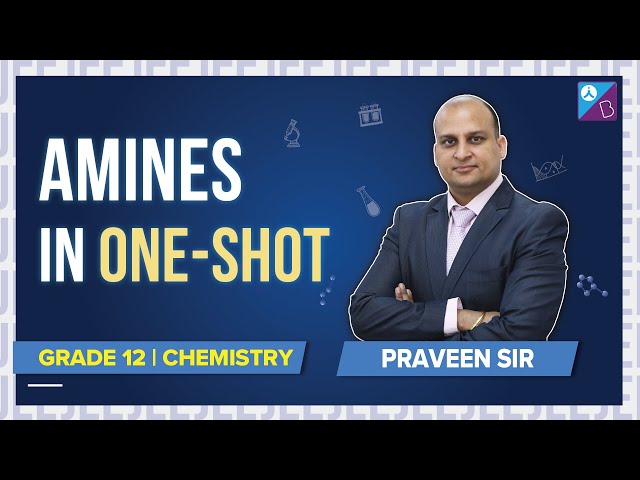 Some of the uses of Amines include;

Why is ammonia less basic than alkyl amine?

Is the primary amine or secondary amine more basic?

In the gaseous phase, tertiary amine > secondary amine > primary amine is the order of basicities of amines.

What is the structure of N-methylethanamine

Give an example of an aromatic amine.

Aniline (C6H5-NH2) is an example of aromatic amine.