Capacitor is a two terminal passive electrical component whose function is to store energy electrostatically in an electric field. The different forms of capacitor vary widely but all contain two electrical conductors separated by a dielectric. The conductors can either be an aluminium foil or disks, thin films of metal, etc. The dielectric acts to increase the capacitor’s charge capacity. A dielectric can be ceramic, glass, plastic film, air, paper, mica, etc. The basic function of a capacitor is to hold a group of electrons. Unlike a resistor, a capacitor does not dissipate energy. Instead, a capacitor stores energy in the form of an electrostatic field between its plates. The increase in the size of plates increases the capacitance as there is more space for the electrons to come out.

For more information on capacitors and capacitance, click on the link given below.

When the capacitors are connected in the form of series combination, the capacitance in total is less than the individual capacitances of the series capacitors. If one, two or number of capacitors are connected in the series form, the overall effect is the single or equivalent capacitor which has the total sum of the spacings between the plates of the individual capacitors. The increase in the plate spacing results in the decreased capacitance, with all the other factors remaining unchanged. 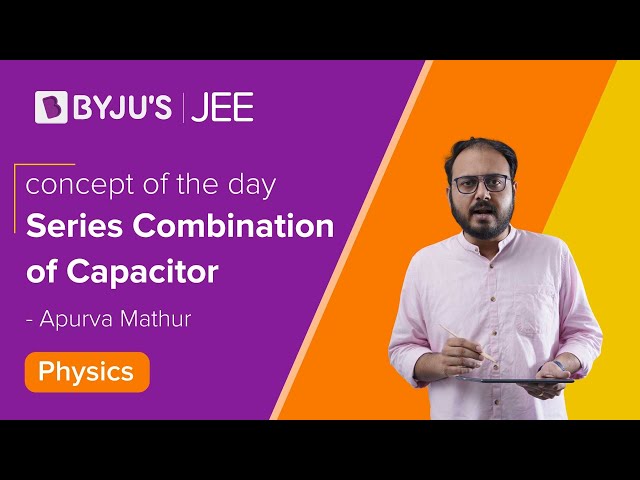 Stay tuned with BYJU’S to learn more about other Physics related articles.

Give any two uses of capacitors?

To store electric charge.
In AC circuit to control current.

What is the formula for the effective capacitance of a number of capacitors in series?

What form of energy is stored in a charged capacitor?

In a charged capacitor energy is stored as electric potential energy.

Farad is the SI unit for capacitance.