Ostwald process is one of the most common methods or chemical process used for the manufacturing of nitric acid. The process was developed in the year 1902 by a German chemist named Wilhelm Ostwald. He was later awarded the Nobel Prize in 1909 for his research.

Ostwald process has gained popularity over the years as it is the easiest way to produce nitric acid which is also widely used in many areas such as in the production of fertilizers as well as inorganic and organic nitrates or nitro compounds.

Usually, in the Ostwald process ammonia is transformed into nitric acid. Vanadium pentaoxide (V2O5) is often used as a catalyst during the processing of nitric acid in this method. There are several steps involved. We shall discuss them in detail below.

The Principle and Mechanism Behind Ostwald’s Process

Before we get into the different steps, let us quickly understand the principle or mechanism behind the Ostwald process. The conversion of ammonia to nitric acid simply occurs as a result of oxidation. This particular oxidation reaction gives us the corresponding nitric oxide. Further, when the nitric oxide is oxidized nitrous gases are formed and those gases can trap water molecule. As a result, we obtain nitric acid. Catalytic oxidation involving O2 is used where ammonia will give rise to the product. 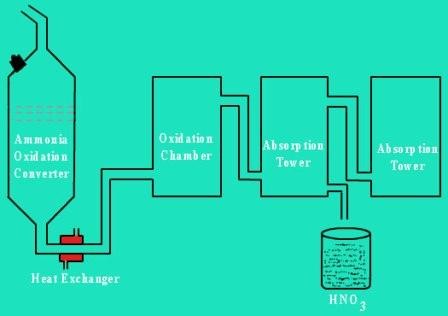 While carrying out the process, there are specific reaction chambers where ammonia is fed from one direction and air through a different path. There are possibilities of side reactions occurring as well. If we go for subsequent ammonia oxidation, we will get some other reactions. It happens usually in the case of dinitrogen. The removal of dinitrogen creates ammonia. If we try to oxidize the ammonia, it will also give back the dinitrogen. There can be other oxidized forms as well.

In all these, optimizing the reaction condition becomes very important, otherwise, many gases can be formed together with the desired NO. It is, therefore, necessary to avoid side reactions.

Moving on, the next stage involves the oxidation of NO2 which can also dimerize to give N2O4. The reaction in this stage is only favoured at low temperatures.

The main goal in this process is the conversion of ammonia into nitric acid. The process begins in a catalyst chamber where one ammonia part and eight oxygen parts are introduced by volume. The chamber temperature is around 600oC. This chamber uses a catalyst-like platinum gauze or copper and nickel can also be used.

The oxidation of ammonia takes place and it is converted into nitric oxide (NO). The process is reversible and exothermic. The change in temperature encourages a forward reaction.

The nitric oxide gas produced by oxidation of ammonia is in a very hot state. It is passed through a heat exchanger in which the temperature of nitric oxide is lowered to 150oC. After cooling, nitric oxide is transferred to another oxidizing tower where nitrogen dioxide (NO2) is oxidized at about 50oC.

In a special absorption tower containing water, the nitrogen dioxide from the secondary oxidation chamber is introduced. NO2 gas is passed through a tower where it absorbs the water. Nitric acid is then obtained through this process.

Nitric acid that is obtained is very dilute. NO is recycled to increase the concentration level which is generally kept around 68 per cent. The acid-in-water solution can also be dehydrated by distillation with sulfuric acid. Here, the pressure is kept between 4–10 standard atmospheres and the temperature is set at 870–1,073 K.

This reaction is exothermic as there is a release of energy. However, since the water and oxygen are constantly added to this cycle as reactants, the increasing concentration will create optimal equilibrium conditions.

Sometimes when producing nitric acid by the Ostwald process can be dangerous due to unfavourable conditions that may arise. More significantly, the concentration and corrosive behaviour of nitric acid can be a safety hazard.