Should Plastic be Banned Essay 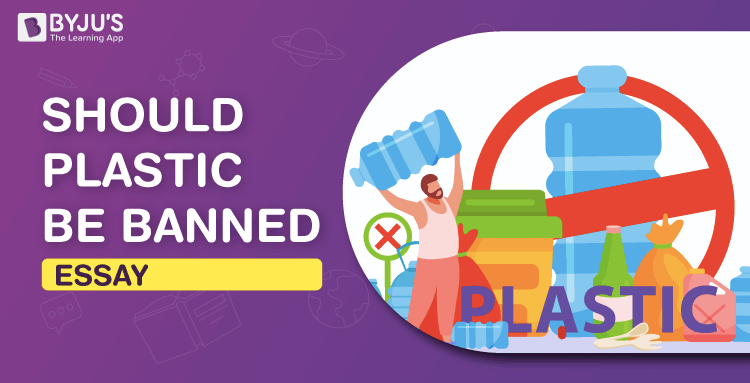 The use of plastic in society has been growing exponentially and BYJU’S should plastic be banned essay explains the importance of prohibiting this hazardous chemical releasing substance. The problem is that most of these materials are not recycled, and instead, they end up in landfills, where they take up space and emit harmful chemicals into the environment. Experts say we could have a plastic-free society by 2030 if more companies invest in recycling programs.

We can recycle plastic, and everyone should try to use recycled products instead of throwing them into landfills. The best way to reduce plastic wastage is through the 3 R’s – reduce, reuse and recycle. Plastic can also be toxic when burned and results in plastic pollution. The environmental impact of plastic is vast because plastic takes up space in landfills, where it contaminates the land most of the time. Finding a way to reuse and recycle plastic would reduce these problems while keeping our environment safe. Teach kids the harm that plastic can do to our precious planet by referring to an essay on should plastic be banned.

Ban on plastic essay is one of the essential sections in kids learning. Plastic is a non-biodegradable substance that causes harm to the environment and all living beings. In addition, disposing of plastic has become a challenge in recent years, and hence, it is essential to follow proper plastic waste management procedures. Plastic takes a very long time to decompose because it doesn’t break down chemically like other materials. This means it is filling up the planet and killing animals that live in these landfills. It also means that plastic can take hundreds of years to break down again.

When we use plastic, it becomes a part of our lives and causes severe environmental pollution. Moreover, plastic is released to water bodies like ponds, rivers and oceans, resulting in massive water pollution and aquatic animals consume it and eventually die. Plastic production is a toxic procedure and creates harm to human beings. It causes severe illness and pollutes the environment.

Should plastic be banned, the essay clarifies that plastic has to be banned.

There has been a lot of progress in the plastic ban, especially by the Government. The Government has noticed Plastic Waste Management Amendment Rules, 2021, prohibiting identified single-use plastic items by July 2022. Social media sites only develop methods to reduce the use of single-use plastics, but they also provide information on other ways to reduce them. They have also been a great source of support for people working to create chaos. In addition, plastic awareness is a must for everyone, and it is suggested to read BYJU’S ban on plastic essay.

Many countries have implemented plastic bans. The United Kingdom, France, and China have had bans. Canada is also considering banning the use of plastic bags and straws. To prevent waste created by the pollution caused by plastic, many brands have created new fabrics that can be used instead of plastic.

The plastic ban on disposable water bottles is an excellent idea because it will reduce waste and help the environment. However, the Government needs to ensure that all pre-existing containers are recycled instead of thrown away. This will ensure that there is no unnecessary waste and pollution.

This is an essay on should plastic be banned for kids. For more essays and stories for kids, visit BYJU’S website.

Frequently Asked Questions on Should Plastic be Banned Essay

Should plastic be banned?

Yes. Plastic is a harmful substance to the planet, and hence, it must be banned.

What do kids learn from BYJU’S should plastic be banned essay?

BYJU’S should plastic be banned essay teaches the little ones the problems caused by plastic and creates awareness on banning plastic.