If we observe in our regular lives, we come across Arithmetic progression quite often. For example, Roll numbers of students in a class, days in a week or months in a year. This pattern of series and sequences has been generalized in Maths as progressions.

What is Arithmetic Progression?

In mathematics, there are three different types of progressions. They are:

A progression is a special type of sequence for which it is possible to obtain a formula for the nth term.  The Arithmetic Progression is the most commonly used sequence in maths with easy to understand formulas.

Definition 1: A mathematical sequence in which the difference between two consecutive terms is always a constant and it is abbreviated as AP.

Definition 2: An arithmetic sequence or progression is defined as a sequence of numbers in which for every pair of consecutive terms, the second number is obtained by adding a fixed number to the first one.

It is considered as an arithmetic sequence (progression) with a common difference 3. 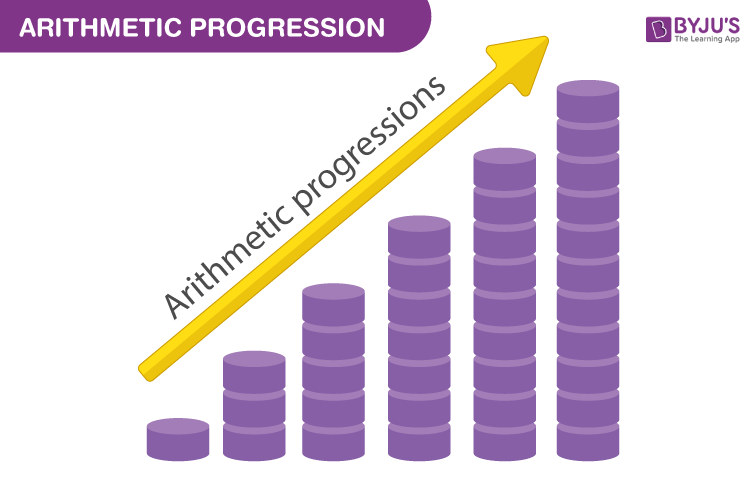 In AP, we will come across some main terms, which are denoted as:

All three terms represent the property of Arithmetic Progression. We will learn more about these three properties in the next section.

The AP can also be written in terms of common differences, as follows;

where  “a” is the first term of the progression.

Where “d” is a common difference. It can be positive, negative or zero.

General Form of an AP

There are two major formulas we come across when we learn about Arithmetic Progression, which is related to:
Let us learn here both the formulas with examples.


nth Term of an AP

The formula for finding the n-th term of an AP is:

Note: The behaviour of the sequence depends on the value of a common difference.

Finite AP: An AP containing a finite number of terms is called finite AP. A finite AP has a last term.

Infinite AP: An AP which does not have a finite number of terms is called infinite AP. Such APs do not have a last term.

For an AP, the sum of the first n terms can be calculated if the first term, common difference and the total terms are known. The formula for the arithmetic progression sum is explained below:

This is the AP sum formula to find the sum of n terms in series.

Adding both the equations term wise, we have:

Example: Let us take the example of adding natural numbers up to 15 numbers.

Now, by the formula we know;

Sum of AP when the Last Term is Given

Formula to find the sum of AP when first and last terms are given as follows:

The list of formulas is given in a tabular form used in AP. These formulas are useful to solve problems based on the series and sequence concept.

Below are the problems to find the nth term and the sum of the sequence, which are solved using AP sum formulas in detail. Go through them once and solve the practice problems to excel in your skills.

From the formula of general term, we have:

Find the below questions based on Arithmetic sequence formulas and solve them for good practice.

To learn more about different types of formulas with the help of personalised videos, download  BYJU’S-The Learning App and make learning fun.

What is the general form of Arithmetic Progression?

What is arithmetic progression? Give an example.

A sequence of numbers that has a fixed common difference between any two consecutive numbers is called an arithmetic progression (A.P.). The example of A.P. is 3,6,9,12,15,18,21, …

How to find the sum of arithmetic progression?

To find the sum of arithmetic progression, we have to know the first term, the number of terms and the common difference. Then use the formula given below:
Sn = n/2[2a + (n − 1) × d]

What are the types of progressions in Maths?

What is the use of Arithmetic Progression?

An arithmetic progression is a series which has consecutive terms having a common difference between the terms as a constant value. It is used to generalise a set of patterns, that we observe in our day to day life. For example, AP used in prediction of any sequence like when someone is waiting for a cab. Assuming that the traffic is moving at a constant speed he/she can predict when the next cab will come.
Quiz on Arithmetic Progression
Q5