Difference Between Mean and Median

The difference between mean and median is explained in detail here. In statistics, mean is the average of a set of data and the median is the middle value of the arranged set of data. Both values have their own importance and play a distinct role in data collection and organisation. Let us see what are other differences between them with the help of definitions, table and example.

Definition of Mean and Median

Mean: Mathematically. the mean can simply be defined as the list of numbers that are used to describe a central tendency. The method to calculate mean is simple enough, the variables need to be added and divided by the number of items in the overall sample. Assume a data value, say x1, x2, … , xn

So, the formula for calculating the mean is given as:

Here “n” is the total number of sample items.

Median: Median, on the other hand, can simply be defined as the number that is found in the middle of the set. Median is an essential quantity that can be used for separating the available sample into two; the higher half sample, as well as the lower half sample, can be procured in this method.

To proceed with the process of finding the median of the given data, first, arrange the given set of numbers on the ascending order, and then determine the middle value from the centre of the distribution. This condition can be suitable if we have an odd number of observations. But, in case of even number of observation, there is no single median value. So, in this case, add the two numbers in the middle and then divide it by 2. The obtained value is taken as a median value.

What is the Difference between Mean and Median?

Here, the major difference between mean and median is listed below. Go through the following differences.

Question: Find the mean and median for the following data:

The mean for the following data is given as:

Therefore, the mean of the following data is 5. 14

Step 1: Arrange the given set of data in ascending order

Step 2: Since the number of data is odd, take the middle value

So, the middle value of the given data is 5.

Thus, the median value is 5.

Video Lesson on Median of Data 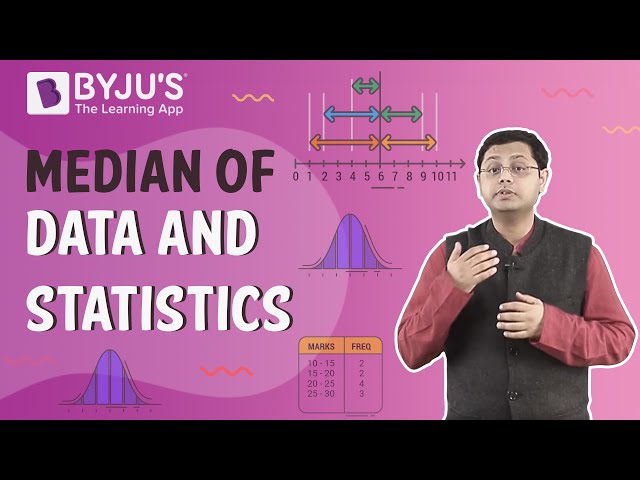 What is the difference between mean and median?

Mean is the average value of set of given data and median is the middle value when the data set is arranged in an order either ascending or descending.

How to find mean and median?

Mean is equal to ratio of sum of all the values in a data set and total number of values.
To find median we need to arrange the given values in ascending order or in descending order, then find the middle value.

What is the formula for mean, median and mode?

What is the difference between median and mode?

The mode states the frequency of an observation or the number of times a value is repeated in a data set.
Median is the middle value of the given data or observations when arranged in an order.
Test your knowledge on Difference Between Mean And Median
Q5