Dodecagon is one of the types of polygons that has twelve sides. It is a regular polygon which has 12 equal sides and has 12 equal measures of angles. Irregular dodecagons have unequal sides and angles. Here, we will discuss the properties, sides, angles, area and perimeter of the twelve-sided polygon. 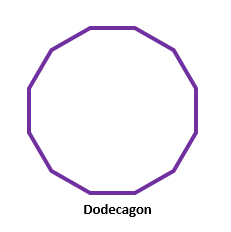 Definition and Types of Polygons

A polygon is a closed figure, formed of straight lines which are called sides. It has at least three sides and three vertices. The surface of the polygon is non-curvy or straight. There are two types of polygons – Regular and irregular. Regular polygons have equal sides as well as equal angles, whereas all the sides and angles are not equal for irregular ones.

Polygons can be further classified into different types based on the number of sides as given below:

Properties of a Dodecagon

The total region covered inside the boundary of the Dodecagon is called the area of a Dodecagon. The area of a regular twelve-sided regular polygon of side length d is given by:

The area calculated in terms of circumradius R of the circumscribed circle is;

The perimeter is the total length of the boundaries of a twelve-sided polygon. Its formula in terms of circumradius R is given by;

Q.2: Calculate the perimeter of a twelve-sided polygon, which is circumscribed by a radius of 5cm.

Solution: Given, radius of circumcircle = 5cm.

The formula for perimeter of dodecagon is;

Test your knowledge on Dodecagon
Q5