In Mathematics, Geometric shapes are the figures which demonstrate the shape of the objects we see in our everyday life. In geometry, shapes are the forms of objects which have boundary lines, angles and surfaces. There are different types of 2d shapes and 3d shapes.

Shapes are also classified with respect to their regularity or uniformity. A regular shape is usually symmetrical such as square, circle, etc. Irregular shapes are asymmetrical. They are also called freeform shapes or organic shapes. For example, the shape of a tree is irregular or organic.

In plane geometry, the two-dimensional shapes are flat shapes and closed figures such as circle, square, rectangle, rhombus, etc.  In solid geometry, the three-dimensional shapes are cube, cuboid, cone, sphere and cylinder. We can observe all these shapes in our daily existence also. For example books (cuboid shape), glasses (cylindrical shape), traffic cones (conical shape) and so on. In this article, you will learn different geometric shapes and their definition along with the examples.

Shapes are nothing but simple geometric figures which have a specific boundary, interior and exterior surface area. In geometry, we can learn various shapes and their properties. Students are introduced with geometry in their classes with basic shapes and terms.

Geometrical shapes are the figures which represent the forms of different objects. Some figures are two-dimensional, whereas some are three-dimensional shapes. The two-dimensional figures lie on only x-axis and y-axis, but 3d shapes lie in x, y and z axes. The z-axis shows the height of the object. As we have already discussed in the introduction, there are different shapes defined in geometry.

To draw or design any of these figures start with a line or a line segment or a curve. Depending upon the number and arrangement of these lines, we get different types of shapes and figures like a triangle, a figure where three line segments are connected, Pentagon (five-line segments) and so on. But every figure is not a complete figure.

Here is the list of different geometric shapes that we learn in geometry.

Types and Properties of Geometric Shapes

Go through the different types of shapes in geometry along with definitions here.

Triangle is a polygon, which is made of three sides and consists of three edges and three vertices. Also, the sum of its internal angles equals to 180o.

Locus of all points at a fixed distance from a reference central point is called a Circle.

Square is a quadrilateral where all the four sides and angles are equal and the angles at all the vertices equal to 90° each.

A quadrilateral which has its two pairs of opposite sides equal in length and interior angles are at the right angles.

A parallelogram is a quadrilateral with two pairs of parallel sides and opposite angles are equal in measures.

These are made up of line segments and no curves. They are enclosed structure based on different length of sides and different angles.

These can be better understood with the help of the table given below:

A point is a small dot which is the starting point of a line segment. By definition, a line segment is a part of a line in which a narrow lane is connecting two points within a line. Different numbers of line segments give us different figures and such figures may be either open figure or closed shapes or figures.

Geometric shapes such as a square, rectangle, and triangles are few basic 2D shapes. These figures are collectively called polygons. A polygon is any flat shape or plane on a surface of a paper. They have a finite closed boundary made up of a fixed number of line segments and are called sides of the polygon. Each side meets at a common point called corners (vertex). 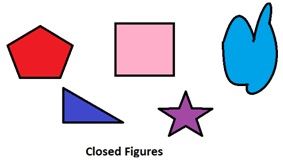 Open figures are incomplete shapes. To sketch a closed figure one has to meet both the starting point and ending point. Open figures are also depicted by using line segments or by curves but at least the lines will be discontinuous. An open figure’s starting and endpoints are different. 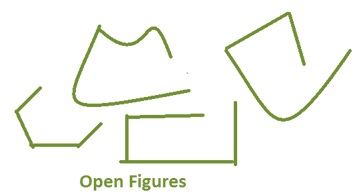 In our daily existence, we may observe different shapes which look exactly the same as some three dimensional geometric shapes.

Apart from the above examples, there are other objects in our surroundings such as traffic cones, Rubik’s cube, pyramid and so on. Observe the below figure, to understand the different shapes that relate to geometric shapes. 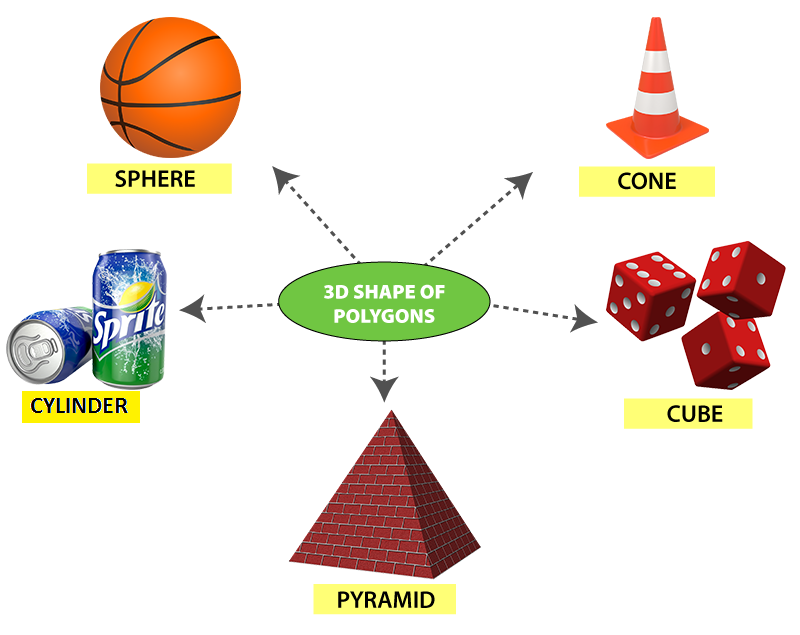 Q.1: Find the open figure from the following.

Solution: Correct answer is figure D. All other figures are closed figures where both the start and endpoints are the same.

Q.2: How many sides does a decagon have?

Answer: The correct answer is C.

Answer: A cone is a three-dimensional solid shape with a circular base and a single vertex. The surface of the cone is narrowed from the base to the vertex.

What are the different geometric shapes in Maths?

There are many shapes in geometry based on their dimensions.
Circle, Triangle, Square, Rectangle, Kite, Trapezium, Parallelogram, Rhombus and different types of polygons are the 2-d shapes.
Cube, Cuboid, Sphere, Cone and Cylinder are the basic three-dimensional shapes.

What are the types of triangles in geometry?

What are the basic kinds of polygons?

What are the examples of three-dimensional shapes?

What are the basic solid shapes?