In geometry, 3D shapes are solid shapes or figures that have three dimensions. Generally, length, width and height are the dimensions of 3D shapes (three-dimensional shapes). The common names of these shapes are cube, cuboid, cone, cylinder and sphere. 3D shapes are defined by their respective properties such as edges, faces, vertices, curved surfaces, lateral surfaces and volume.

We come across a number of objects of different shapes and sizes in our day-to-day life. There are golf balls, doormats, ice-cream cones, coke cans, and so on. In this article, we will discuss the various 3D shapes, surface area and volumes, and the process of making 3D shapes using nets with the help of 2D Shapes.

What are 3D Shapes?

In Geometry, 3D shapes are known as three-dimensional shapes or solids. 3D shapes have three different measures such as length, width, and height as its dimensions. The only difference between 2D shape and 3D shapes is that 2D shapes do not have a thickness or depth.

Polyhedrons are 3D shapes. As discussed earlier, polyhedra are straight-sided solids, which has the following properties:

Like polygons in two-dimensional shapes, polyhedrons are also classified into regular and irregular polyhedrons and convex and concave polyhedrons.

The most common examples of polyhedra are:

For example, the most commonly used example of a polyhedron is a cube, which has 6 faces, 8 vertices, and 12 edges.

Faces, edges and vertices are three important measures of 3D shapes, that defines their properties.

As we already discussed above the properties of 3D shapes are based on their faces, edges and vertices. Thus, we can have a brief of all the properties here in the table.

The two different measures used for measuring the 3D shapes are:

Surface Area is defined as the total area of the surface of the two-dimensional object. The surface area is measured in terms of square units, and it is denoted as “SA”. The surface area can be classified into three different types.  They are:

Volume is defined as the total space occupied by the three-dimensional shape or solid. It is measured in terms of cubic units and it is denoted by “V”.

The formulas of 3D shapes related to surface areas and volumes are:

A net is a flattened out three-dimensional solid. It is the basic skeleton outline in two dimensions, which can be folded and glued together to obtain the 3D structure. Nets are used for making 3D shapes. Let us have a look at nets for different solids and its surface area and volume formula.

A cuboid is also known as a rectangular prism. The faces of the cuboid are rectangular. All the angle measures are 90 degrees.

Take a matchbox. Cut along the edges and flatten out the box. This is the net for the cuboid. Now if you fold it back and glue it together similarly as you opened it, you get the cuboid. 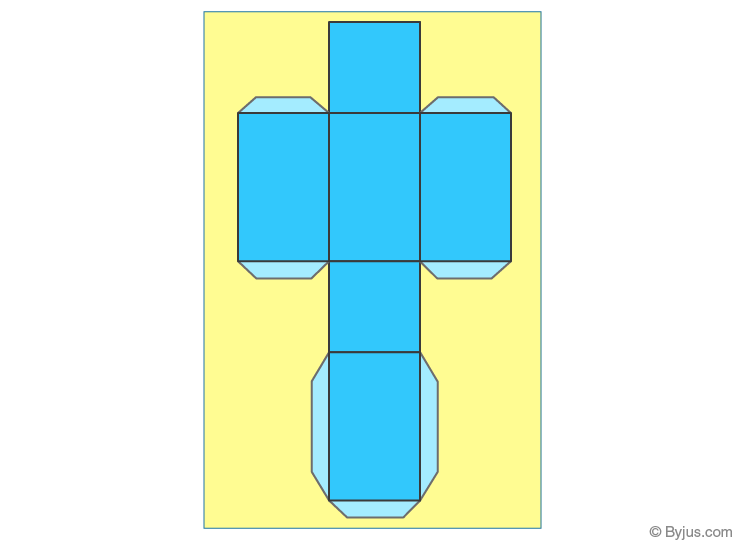 A cube is defined as a three-dimensional square with 6 equal sides. All the faces of the cube have equal dimension.

Take a cheese cube box and cut it out along the edges to make the net for a cube. 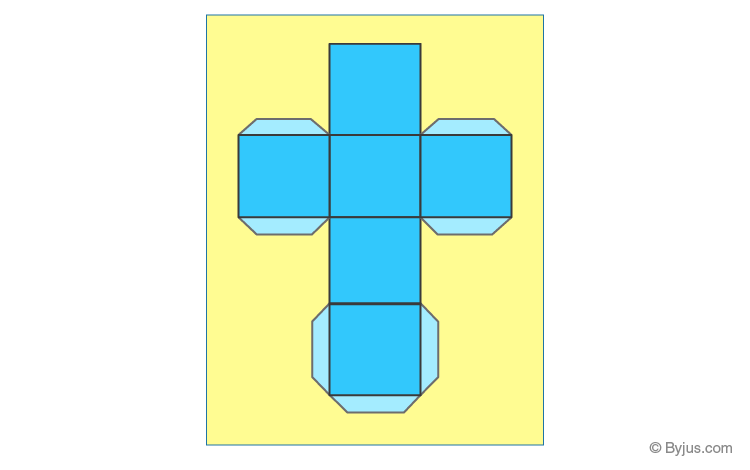 A cone is a solid object that has a circular base and has a single vertex. It is a geometrical shape that tapers smoothly from the circular flat base to a point called the apex.

Take a birthday cap which is conical. When you cut a slit along its slant surface, you get a net for cone.

A cylinder is a solid geometrical figure, that has two parallel circular bases connected by a curved surface.

A pyramid, also known as a polyhedron. A pyramid can be any polygon, such as a square, triangle and so on. It has three or more triangular faces that connect at a common point is called the apex.

The net for a pyramid with a square base consists of a square with triangles along its four edges. 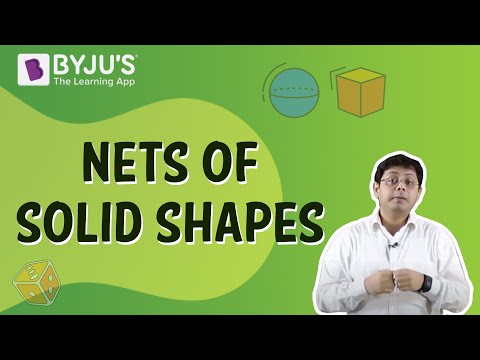 Solution: Given, the edge of cube = 4cm

By the formula we know that;

Solution: Given, the dimensions of cylinder are:

What is meant by 3D shape in Maths?

In Maths, three-dimensional shapes (3D shapes) are also called the solids, which have three-dimensions namely length, width and height. 3D shapes can include both polyhedrons and curved solids.

What is the difference between 2D and 3D shapes?

Mention the properties of the 3D shape.

The three important properties of 3d shapes are faces, edges, and vertices. The face is called the flat surface of the solid, the edge is called the line segment where two faces meet, and the vertex is the point where two edges meet.

What is the 3D shape of a square?

The three-dimensional form of the square is called a cube, which has 6 faces, 8 vertices, and 12 edges.

Write down the examples of 3D shapes?

Some of the examples of 3D shapes are cube, cuboid, cone, cylinder, sphere, pyramid, prism, and so on.

From the above discussion, students would be able to recognize the importance of shapes and forms to a great extent.  Learn different types of shapes and their examples online at BYJU’S – The Learning App.