Set is defined as a well-defined collection of objects. These objects are referred to as elements of the set. Different types of sets are classified according to the number of elements they have.  Basically, sets are the collection of distinct elements of the same type. For example, a basket of apples, a tea set, a set of real numbers, natural numbers, etc. Let now learn the sets types here in this article. 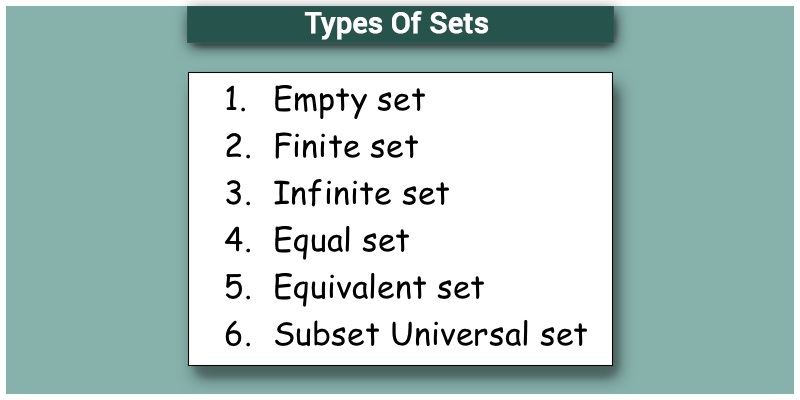 Types of Sets in Maths

The different types of sets are as follows:

The set is empty! This means that there are no elements in the set. This set is represented by ϕ or {}. An empty set is hence defined as:

Definition: If a set doesn’t have any elements, it is known as an empty set or null set or void set. For e.g. consider the set,

0 is the only whole number that is not a natural number. If y ≠ 0, then there is no other value possible for y. Hence, Q = ϕ.

If a set contains only one element, then it is called a singleton set. For e.g.

In this set, the number of elements is finite. All the empty sets also fall into the category of finite sets.

Definition: If a set contains no element or a definite number of elements, it is called a finite set.

If the set is non-empty, it is called a non-empty finite set. Some examples of finite sets are:
A = {x : x is a month in a year}; Set A will have 12 elements

Just contrary to the finite set, it will have infinite elements. If a given set is not finite, then it will be an infinite set.

B = {y: y is the ordinate of a point on a given line}; There are infinite points on a line. So, B is an infinite set.

An understanding of what subsets are is required before going ahead with Power-set.

Definition: The power set of a set A is the set which consists of all the subsets of the set A. It is denoted by P(A).

For a set A which consists of n elements, the total number of subsets that can be formed is \(2^n\). From this, we can say that P(A) will have \(2^n\) elements.

Definition: If a set A contains elements which are all the elements of set B as well, then A is known as the subset of B.

This is the set which is the base for every other set formed. Depending upon the context, the universal set is decided. It may be a finite or infinite set. All the other sets are the subsets of the Universal set. It is represented by U.

In the discussion above, we have learned how to classify sets on the basis of their elements. To learn more about sets and other topics, visit our site BYJU’S and find interesting articles on every topic.

Test your knowledge on Types Of Sets
Q5