All the properties of a triangle are based on its sides and angles. By the definition of triangle, we know that, it is a closed polygon that consists of three sides and three vertices. Also, the sum of all three internal angles of a triangle equal to 180°.

Quiz on Properties of Triangle
Q5

Depending upon the length of sides and measure of angles, the triangles are classified into different types of triangles. Triangle is an important concept which is taught in most of the classes like Class 7, Class 8, Class 9, Class 10 and in Class 11. You will learn the properties of triangles here along with its definitions, types and its significance in Maths.

In the beginning, we start from understanding the shape of triangles, its types and properties, theorems based on it such as Pythagoras theorem, etc. In higher classes, we deal with trigonometry, where the right-angled triangle is the base of the concept. Let us learn here some of the fundamentals of the triangle by knowing its properties.

Scalene Triangle: All the sides and angles are unequal.

Isosceles Triangle: It has two equal sides. Also, the angles opposite these equal sides are equal.

Equilateral Triangle: All the sides are equal and all the three angles equal to 60°.

Acute Angled Triangle: A triangle having all its angles less than 90°.

Right Angled Triangle: A triangle having one of the three angles exactly 90°.

Obtuse Angled Triangle: A triangle having one of the three angles more than 90°.

The properties of the triangle are:

where a, b and c are the sides of the triangle.

where ‘s’ is the semi-perimeter of the triangle. 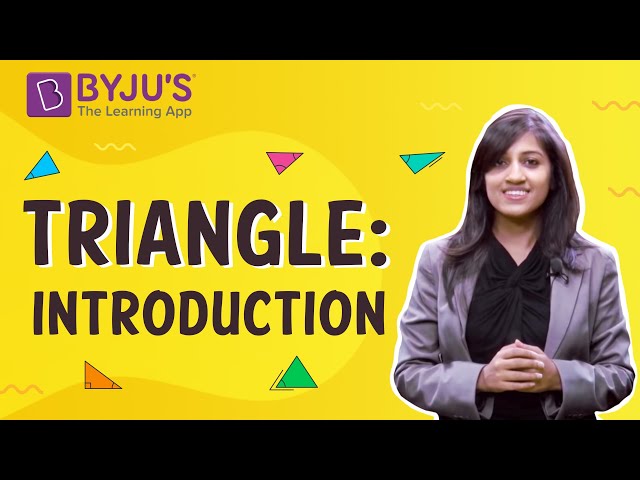 Example 1: If an equilateral triangle has lengths of sides as 5 cm and perpendicular is drawn from the vertex to the base of the triangle, then find its area and perimeter.

Solution: Given, side of the equilateral triangle, say AB = BC = CD = 5 cm

If we draw a perpendicular from the vertex of an equilateral triangle, A to the base at point O, it divides the base into two equal sides.

To find the height of the triangle, AOB, we have to use Pythagoras theorem.

That is, Hypotenuse2 = Base2 + Perpendicular2

Perimeter of triangle ABC = sum of all its three sides

Example 2: If the sides of a triangle are given by 3 cm, 4 cm and 5 cm, where the base is 4cm and the altitude of the triangle is 3.2 cm, then find the area and perimeter of the triangle.

Solution: Let the given sides of the triangle be:

Altitude is the height of the triangle = 3.2 cm

By the formula of area of the triangle, we know;

Now, the perimeter of the triangle is given by;

Learn more about different interesting topics of geometry here at BYJU’S. Also, download the BYJU’S app to get a visual of such figures and understand the concepts in a better and creative way.

What are the five properties of triangles?

What are the types of triangles and their properties?

What do we mean by triangle?

A triangle is a closed polygon in a two-dimensional plane having three sides and three angles. By the name itself, a triangle is made by combining two words tri means three and angle.

What is the angle sum property of triangles?

What is the exterior angle property of triangles?

As per the exterior angle property of triangles, the angle formed outside the triangle adjacent to any interior angle is equal to the sum of interior opposite angles.