Here we will learn about its definition, formulas, properties of cylinder and will solve some examples based on them. Apart from this figure, we have concepts of Sphere, Cone, Cuboid, Cube, etc. which we learn in Solid Geometry.

In mathematics, a cylinder is a three-dimensional solid that holds two parallel bases joined by a curved surface, at a fixed distance. These bases are normally circular in shape (like a circle) and the center of the two bases are joined by a line segment, which is called the axis. The perpendicular distance between the bases is the height, “h” and the distance from the axis to the outer surface is the radius “r” of the cylinder.

Below is the figure of the cylinder showing area and height. 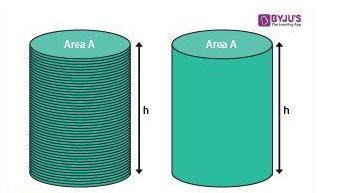 A cylinder is a three-dimensional shape consisting of two parallel circular bases, joined by a curved surface. The center of the circular bases overlaps each other to form a right cylinder. The line segment joining the two centers is the axis, that denotes the height of the cylinder.

Unlike cones, cube and cuboid, a cylinder does not have any vertices, since the cylinder has a curved shape and no straight lines. It has two circular faces.

Each shape has some properties that differentiate one shape from another. Therefore, cylinders also have its characteristics.

To learn more properties of cylinder.

The cylinder has three major quantities, based on which we have the formulas.

Let us see, their formulas now.

The area of the curved surface of the cylinder which is contained between the two parallel circular bases. It is also stated as a lateral surface area. The formula for it is given by:

The total surface area of a cylinder is the sum of curved surafce area and the area of two circular bases.
TSA = Curved surface + Area of Circular bases
TSA = 2πrh + 2πr2
We can see, from the above expression, 2πr is common. Therefore,

Every three dimensional shape or a solid has volume that occupies some space. The volume of the cylinder is the space occupied by it in any three-dimensional plane. The amount of water that could be immersed in a cylinder is described by its volume. The formula for the volume of cylinder is given by:

Where ‘h’ is the height and ‘r’ is the radius.
Also, read: Area Of Hollow Cylinder

Question 1: Find the total surface area of the cylinder, whose radius is 5cm and height is 10cm?

Solution: We know, from the formula,

Total surface area of a cylinder, A = 2πr(r+h) square units

Question 2: What is the volume of a cylindrical shape water container, that has a height of 7cm and diameter of 10cm?

Diameter of the container = 10cm

Height of the container = 7cm

As we know, from the formula,

What are the characteristics of cylinder?

How many vertices does a cylinder have?

A cylinder has two faces that are circular in shape and parallel to each other. But it does not have any vertices, since it is a curved shape.

What are the real life examples of cylinder?

What are the formulas of cylinder?

How many bases does the cylinder have?

A cylinder is having two circular bases.

How to find total surface area of cylinder?