In Mathematics, a function is a special relationship between two sets (input set and output set). Every member of the output set is uniquely related to one or more members of the input set. The function is represented by “f”. There are different types of functions. They are classified according to the categories. One such category is the nature of the graph. Depending upon the nature of the graph, the functions can be divided into two types namely

Generally, when the curve of a function bends, it forms a concave shape. It is known as the concavity of a function. In graph function, two types of concavity can be found.

Concave Up – If a curve opens in an upward direction or it bends up to make a shape like a cup, it is said to be concave up or convex down.

Concave Down – If a curve bends down or resembles a cap, it is known as concave down or convex up. In other words, the tangent lies underneath the curve if the slope of the tangent increases by the increase in an independent variable.

If f(x) is a differentiable function, then f(x) is said to be: 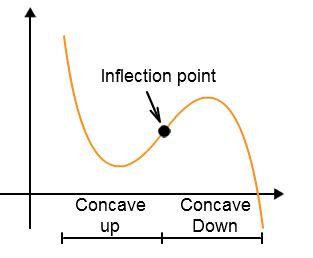 The point of inflection defines the slope of a graph of a function in which the particular point is zero. The following graph shows the function has an inflection point.

It is noted that in a single curve or within the given interval of a function, there can be more than one point of inflection.

How to Find the Inflection Point on a Graph?

Refer to the following problem to understand the concept of an inflection point.

The first derivative of the function is

The second derivative of the function is

Divide by 12 on both sides, we get