The PDE is said to be linear if f is a linear function of u and its derivatives. The simple PDE is given by;

The above relation implies that the function u(x,y) is independent of x which is the reduced form of partial differential equation formula stated above. The order of PDE is the order of the highest derivative term of the equation.

How to Represent Partial Differential Equation?

In PDEs, we denote the partial derivatives using subscripts, such as; 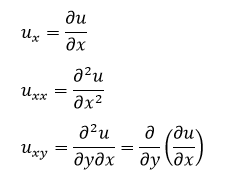 In some cases, like in Physics when we learn about wave equations or sound equation, partial derivative, ∂ is also represented by ∇(del or nabla).

Each type of PDE has certain functionalities that help to determine whether a particular finite element approach is appropriate to the problem being described by the PDE. The solution depends on the equation and several variables contain partial derivatives with respect to the variables. There are three-types of second-order PDEs in mechanics. They are

Consider the example, auxx+buyy+cuyy=0, u=u(x,y). For a given point (x,y), the equation is said to be Elliptic if b2-ac<0 which are used to describe the equations of elasticity without inertial terms. Hyperbolic PDEs describe the phenomena of wave propagation if it satisfies the condition b2-ac>0. For parabolic PDEs, it should satisfy the condition b2-ac=0. The heat conduction equation is an example of a parabolic PDE.

The different types of partial differential equations are:

Let us discuss these types of PDEs here.

In Maths, when we speak about the first-order partial differential equation, then the equation has only the first derivative of the unknown function having ‘m’ variables. It is expressed in the form of;

If all the terms of a PDE contain the dependent variable or its partial derivatives then such a PDE is called non-homogeneous partial differential equation or homogeneous otherwise. In the above four examples, Example (4) is non-homogeneous whereas the first three equations are homogeneous.

Show that if a is a constant ,then u(x,t)=sin(at)cos(x) is a solution to

Since a is a constant, the partials with respect to t are

Therefore, u(x,t)=sin(at)cos(x) is a solution to

Register with BYJU’S learning app to get more information about the maths-related articles and formulas. start practice with the problems.