MSBSHSE Class 9 Science Chapter 18 Observing Space: Telescopes Solutions is a crucial reference material for students preparing for the MSBSHSE Class 9 Science examination. These solutions are crafted with detailed answers and step-by-step explanations. These help the students to easily master the basic concepts of the chapter and thus, perform well in the exams. Observing Space: Telescopes, a crucial topic of Science is discussed at length in this chapter. These solutions aim to give answers to those questions that arose for the students, while learning the subject. The main concepts covered under this topic include Forms of light, Telescopes and types of telescopes, Telescopes in space, Indian Space Research Organisation (ISRO) and more.

In order to ace the subject more efficiently, students are advised to practise these MSBSHSE Solutions of Class 9 Science Chapter 18 Observing Space: Telescopes. These solutions are crafted after thorough research and include the questions from Chapter 18 of the textbook. This also helps to familiarise the students with the exam questions. The well designed content is very clear and explains the concepts in easy to understand language. This solution covers the main topics based on the new MSBSHSE Syllabus for Class 9. The solutions to the questions listed here help students to self-assess their performance and exam preparation level. Hence, solving these questions and giving highly relevant answers will help students to face exams with more confidence.

2. What are the difficulties in using ground based optical telescopes? How can we overcome this?

Answer: Visible light and the radio waves that are emitted by heavenly bodies in space can pass through the earth’s atmosphere and reach the earth’s surface. So, optical and radio telescopes can be erected on the surface of the earth. Nevertheless, these earth-based telescopes present some problems in making good quality observations. The heavenly bodies have to pass through the atmosphere to reach the surface of the earth. In this process, some of the light is absorbed by the atmosphere, thus decreasing the intensity of light reaching the surface of the earth. Some change also occurs in the atmospheric pressure and temperature, resulting in turbulence in the atmosphere, further leading to modification of the path of light rays and to the position of the image. Additionally, optical telescopes cannot be used during the day as a result of sunlight. Meanwhile, the city lights and cloudy weather of the night is also detrimental to observing the heavenly bodies. One of the best ways to overcome this issue is to place the optical telescopes on top of the mountains, in uninhabited places. Another way to completely get rid of all the above problems is to place the telescope above the earth’s atmosphere, in space itself. Since these problems do not exist in space, the image obtained by space telescopes would be bright and very clear and will remain at one place.

3. Draw diagrams of type of telescopes made using a concave mirror and convex mirror. 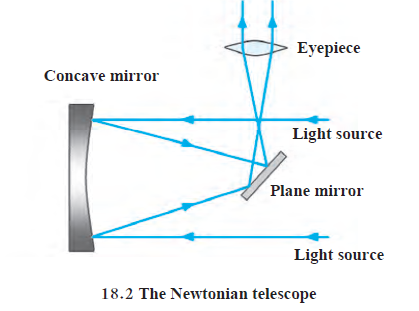 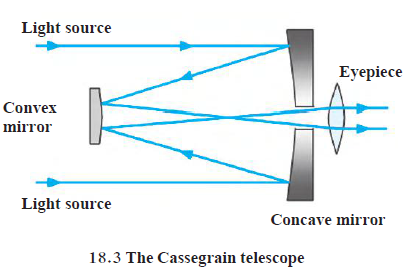 4. Explain the construction of Galileo’s telescope.

Answer: In 1608, spectacle maker and researcher, Hans Lippershey discovered that seeing through two lenses kept one behind the other, seems to bring objects closer to us. He, thus, made the first telescope. Galileo made a telescope in 1609 by using a converging lens (biconvex or plano-convex) as objective and a diverging lens (biconcave or plano-concave) to serve as an eyepiece. He kept the eye piece in front of the focal point of the objective. Galileo used this for space observations. He realised there are more stars then that could be seen with naked eyes. He used the telescope to discover the moons of Jupiter, the black spots on the sun and more.

5. Explain the construction of a radio telescope.

Answer: The radio telescope is made out of one or more dishes of a particular parabolic shape. As in optical telescopes, these dishes reflect the incident radio waves. These waves are then converged at the focus. A radio receiver is then positioned at the focal point. The information gathered by this receiver is passed on to a computer that analyses it and generates an image of the source.

6. What is visible radiation?

Answer: Light is an electromagnetic wave with a characteristic wavelength. Only the light that has wavelengths between 400 nm to 800 nm is visible to our eyes. Such light is called visible radiation.

7. Why do we need different types of telescopes like the X-ray, gamma-ray and radio telescopes?

8. What are refracting telescopes?

Answer: Refracting telescopes use a combination of lenses to form a magnified image. In order to collect the maximum amount of light coming from a heavenly object, a large objective lens is used in the telescope. Using the light collected by the objective lens, a smaller lens called the eyepiece, produces a large image of the source. It is seen that light rays change their direction as they enter a lens from the atmosphere and then again when they enter the atmosphere after passing through the lens. This is called refraction. Hence, such telescopes are called refracting telescopes.

9. What are reflecting telescopes?

10. Which is the largest optical telescope in Asia?

Answer: The largest optical telescope in India has a mirror of 3.6 m diameter and can be found at the Aryabhatt Research Institute of Experimental Sciences, in Nainital.

Answer: A large radio telescope known as the Giant Metrewave Radio Telescope (GMRT) is erected at Narayangaon, near Pune. This uses radio waves having wavelengths of about a metre, coming from heavenly bodies to study those bodies. This giant telescope is an arrangement of a collection of 30 dishes of diameter 45m each over an area of up to 25km across, making it work like a single dish of 25km diameter. That is GMRT provides the same data as would be available from a telescope with a single dish of 25km diameter. GMRT is manufactured at minimum cost by the Indian scientists and engineers. Scientists can now use GMRT to study the solar system, solar winds, pulsars, supernova, interstellar hydrogen clouds and so on. Scientists from all over the world come to India to make use of this facility.

12. What is a Hubble telescope?

14. When was ISRO established and why?

Answer: ISRO or the Indian Space Research Organisation located in Bengaluru was set up in 1969 with the aim of developing technology for manufacturing and launching artificial satellites.

15. What are the uses of satellites launched by ISRO?

Answer: ISRO has successfully launched a large number of satellites. We have mentioned a few here, with their uses. The INSAT and GSAT series of satellites supporting our telecommunication network, television broadcasting and meteorological services provides the telephone, television and internet services in the country. Meanwhile, EDUSAT satellite is used exclusively for education and IRS satellite series is used to monitor and manage natural resources as well as for disaster management.

Answer: An artificial satellite launched in space by Indian Space Research Organization (ISRO) in 2015 is known as Astorsat. This artificial satellite has Ultraviolet and X-ray telescopes and detectors. Components of this satellite are manufactured in India. This is a unique system with different kinds of telescopes on a single satellite. Indian scientists are studying several aspects of the Universe with the help of the data obtained with these telescopes.

17. Even though refracting telescope is useful for space observations, it presents certain difficulties. What are they? How do we overcome them?

Answer: Difficulties presented by refracting telescopes are given here:

1. To obtain a bright image of a source by collecting the maximum possible light from it, the objective lens should be as large as possible. However, it is very difficult to make very large lenses. Also, large lenses are very heavy and tend to get distorted.

3. The images formed by lenses have errors of colours. This is called chromatic aberration.

To overcome these issues, telescopes are made using concave mirrors. As the mirrors in these telescopes reflect the light ray, they are called reflecting telescopes.To obtain a bright image of a source, large mirrors are necessary (so that they can collect a large amount of light from the source). However, manufacturing large mirrors is easier in comparison to producing large lenses. Big mirrors can also be made by combining several smaller pieces. Weight of the large mirror will also be less than that of a lens of the same size. Also, the images formed by mirrors do not have errors of colour. Only by using these large telescopes, can we see far away stars and galaxies that are not easily visible to our naked eyes.

18. How to get a magnified image of the source in the Newtonian telescope?

Answer: In a Newtonian telescope, light rays from space are reflected using the concave mirror. However, they are deflected again by a small plane mirror, before these reflected rays converge at the focus. As a result, they get focused at a point lying on the perpendicular to the axis of the telescope’s cylinder. They pass through the eyepiece and we get a magnified image of the source.

19. How to get a magnified source using a Cassegrain telescope?

20. What is the wavelength of these types of radiation?

Answer: The wavelengths of these types of radiation are as given below:

(b) Radio waves have wavelength longer than about 20 cm

(g) Gamma rays have a wavelength shorter than 3pm

Students, who want to ace the exams can refer to these MSBSHSE Class 9 Solutions and master the chapterwise questions of subjects like Maths and Science. Other resources we offer are the syllabus, textbooks and question papers. Stay tuned to get more details about the board and exams.

How can we prepare for Maharashtra Board Class 9 Science Chapter 18?

Students are highly recommended solving these solutions after revising the chapter. These questions act as the perfect guide for Class 9 students during their board exam preparation, as they are crafted by qualified subject teachers, according to the latest Class 9 Science Syllabus. Students can also discover various solved questions and exercises that will aid them to prepare well for board exams.

Can we access Maharashtra Board Class 9 Science Solutions Chapter 18?

Students can easily download the solutions from the link given in this article. We have also provided the solutions as a scrollable PDF  on the webpage, and we have mentioned the clickable link for the students to access. Meanwhile, these questions and the solutions are made available online on our webpage, as well.

How are these Maharashtra Board Class 9 Science Solutions Chapter 18 useful for students?

Students are encouraged to initially solve the questions and then to refer back to the solutions to get an idea about the mistakes. Identifying them early on, helps to avoid making any for the exams. These Maharashtra Board Solutions for Class 9 Science Chapter 18 Observing Space: Telescopes are very resourceful for the students to gauge their exam preparations. It also helps them to manage their time in a better way during exams.