Work and Energy is a significant topic of Science and it is discussed in detail in this chapter covering concepts such as work, energy, mechanical energy, law of conservation of energy, freefall and so on. Students can learn thoroughly about the subject by revising these MSBSHSE Class 9 Solutions of Science Chapter 2 Work and Energy. These solutions are prepared following proper research and will help students to gain a thorough conceptual understanding. The well structured content makes it easier for students to learn and comprehend even the most complex topics from the chapter. The content is created on the basis of the latest MSBSHSE Syllabus for Class 9. The solutions provided here are designed to meet the multiple criteria required to do well in the exams. Practising these questions and answering with the highly relevant answers is the best way to retain the performance through various classes.

1. Explain unit of work as per SI and CGS system.

Alternately, the unit of force In CGS system is dyne, while that of displacement is a centimetre (cm). So, the unit of work done is dyne-centimetre, also called an erg.

2. Define the relationship between joule and erg using the equation.

3. With the force and the displacement specified, define the work done by the force.

Answer: Work done by the force in the various scenarios are explained here:

1. The work done by the force is positive when the force and the displacement are in the same direction (θ=00)

2. Work done by the force is negative when the force and the displacement are in opposite directions (θ=1800)

4. Give an example of where the work done by the gravitational force is zero.

5. Write about the National Physical Laboratory.

Answer: The National Physical Laboratory, conceptualized in 1943 was situated in New Delhi and functions under the Council of Scientific and Industrial Research. The institute conducts basic research in the various branches of physics as well as helps various industries and institutes that are engaged in developmental work. The main objective of this institute is to establish national standards of various physical quantities.

The value for F = mg

(Because the displacement is opposite the direction of the force, the negative sign is mentioned.)

7. Pravin has applied a force of 100 N on an object, at an angle of 600 to the horizontal. The object gets displaced in the horizontal direction and 400 J work is done. What is the displacement of the object?

The displacement of the object = 8m.

8. Define energy. What is its unit?

Answer: Energy is the capacity of a body to perform work. Unit of energy is the same as that of work. In the SI system, the unit is joule, while in the CGS system, it is erg.

9. What is kinetic energy?

10. What is the potential energy?

Answer: Potential energy of the object is the energy stored in it because of its specific state or position.

11. Ajay and Atul have been asked to determine the potential energy of a ball of mass m kept on a table as shown in the figure. What answers will they get? Will they be different? What do you conclude from this? 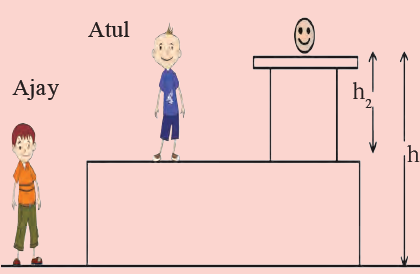 Answer: As seen from the picture, the heights of the ball with respect to Ajay

12. Into which form are the chemical energy stored in the exploding firecrackers converted to?

Answer: Energy is transformed from one form to another. In the example stated, the exploding firecrackers convert the chemical energy stored in them into light, sound and heat energy.

13. What is the law of conservation of energy?

Answer: ‘Energy can neither be created nor destroyed. It can be converted from one form into another. Thus, the total amount of energy in the universe remains constant’.

14. Arrive at the Expression for Kinetic Energy.

Answer: Given that a stationary object of mass m moves because of an applied force with an initial velocity (here u = 0) and applied force be F. This generates an acceleration a in the object, and, following time t, the final velocity of the object becomes equal to v. The displacement during this time is s. Hence, The work done on the object, W = F . s. That is, W = F × s.

Now if we were to use Newton’s First equation of motion, you get

v= u + at , replace the initial velocity with value and

Since, kinetic energy of an object is the amount of work done on it, KE = W. Thus, arriving at the expression KE= ½ mv2.

15. A stone having a mass of 250 gm is falling from a height. How much kinetic

energy does it have at the moment when its velocity is 2 m/s?

16. Write the expression for potential energy.

Answer: In order to carry an object of mass ‘m’ to a ‘h’ height above the earth’s surface, a force ‘mg’ has to be applied against the direction of the gravitational force. Here, the amount of work done can be calculated as follows.

Hence, the amount of potential energy stored in the object because of its displacement

I.e., P.E. = mgh ( given that W = P.E.). Thus, we can arrive at the conclusion that Displacement to height h causes energy equal to mgh to be stored in the object.

the amount of potential energy stored in the water.

Now, given that g=9.8m/s2, calculate PE using the equation.

18. Draw a diagram for transformation of energy. 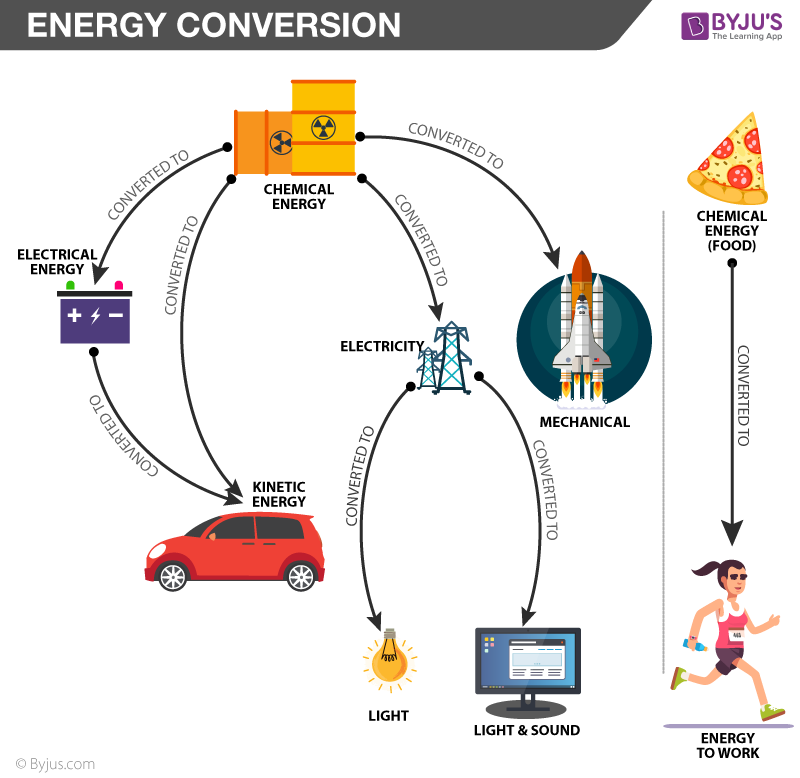 Answer: The unit of work in the SI system is J. Hence, the power of the unit is known as J / s called watt. 1 Watt = 1 Joule / 1 sec. Meanwhile, in the industrial sector the unit used to measure power is termed as ‘horse power.’ 1 horse power = 746 watt.

23. A 25 W electric bulb is used for 10 hours every day. How much electricity does it consume each day?

24. Explain the difference between kinetic energy and potential energy.

25. Prove that the kinetic energy of a freely falling object on reaching the ground is nothing but the transformation of its initial potential energy.

Answer: See, the figure given below: 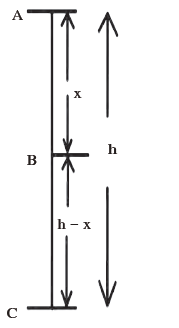 26. Determine the amount of work done when an object is displaced at an angle of 300 with respect to the direction of the applied force.

27. Why is the work done on an object moving with uniform circular motion zero?

28. An electric pump has 2 kW power. How much water will the pump lift every minute to a height of 10 m?

Given the formula P = W /t = mgh / t and applying the given values to calculate,

29. If the energy of a ball falling from a height of 10 metres is reduced by 40%, how high will it rebound?

Now, the energy of the ball on falling from is potential energy, Hence

Now, on reaching the ground level, the ball loses 40% of its initial energy and rebounds back to h1 with its new energy E1. E1== 60% × E . Mass though remains constant. Hence,

30. Ravi applied a force of 10 N and moved a book 30 cm in the direction of the force. How much was the work done by Ravi?

Apply the given values to the equation W = Force × displacement. Hence,

Meanwhile, students studying in the 9th standard should know the syllabus thoroughly to excel in their exam. Keep visiting BYJU’S to get the detailed Maharashtra Board syllabus, Maharashtra state Board books, Question papers, Sample papers, etc.

Where can I get Maharashtra State Board Class 9 Science Solutions Chapter 2?

We have provided the Maharashtra State Board Solutions for Class 9 Science Chapter 2 Work and Energy as a scrollable PDF, and we have also mentioned the clickable link for the students to access. Meanwhile, the questions and the solutions  are also available online on our webpage.

Why is Maharashtra State Board Class 9 Science Solutions Chapter 2 important?

These solutions are significant because they are the perfect guide for the students who are preparing for the Class 9 exams. These solutions cover the topics that forms the basis for the questions that are likely to be asked in the board exams. Preparing with the help of these solutions help students to ace the exams.

How to study for Maharashtra State Board Class 9 Science Solutions Chapter 2?

Students can solve the questions and refer back to the solutions to identify mistakes and avoid them for exams. Timing the process, helps to manage time better. Solutions are the best tool to self asses your exam preparations.