The NCERT Solutions are designed in a simple manner to help students have a solid understanding of this unit, so that they can attempt the questions and score well in this subject. To download the solutions PDF of this chapter, students can access the link provided below. 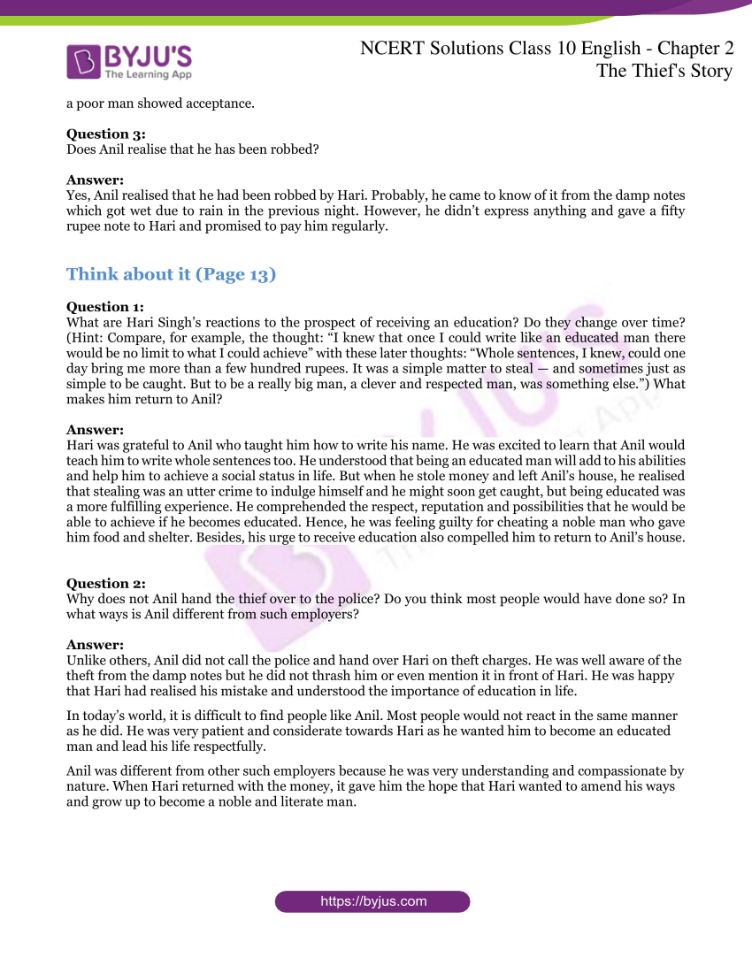 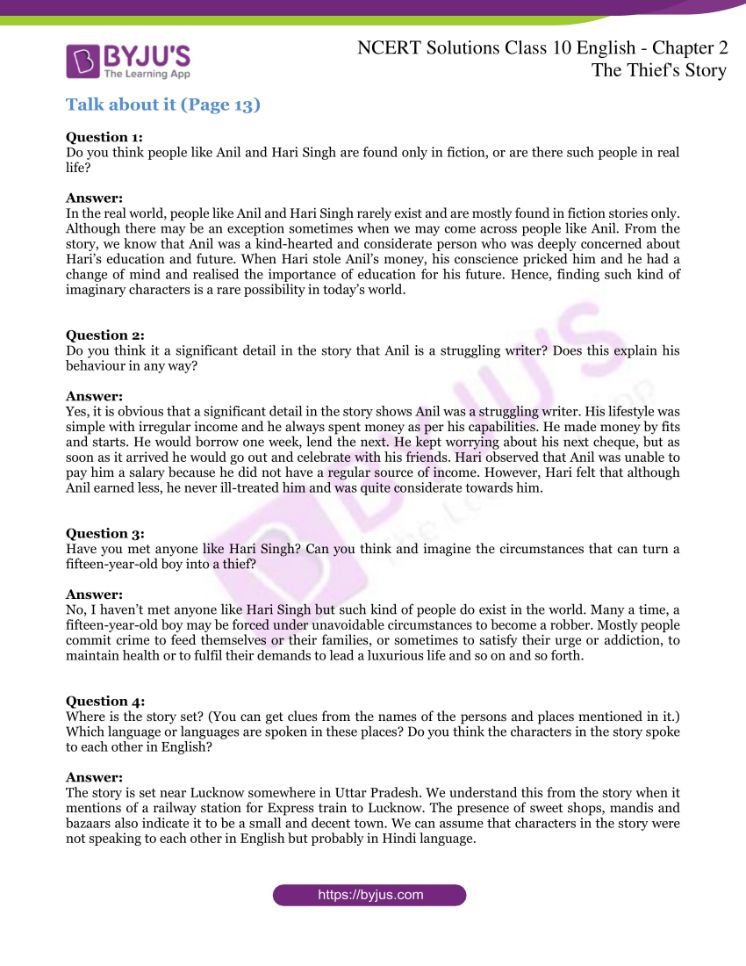 This story written by Ruskin Bond is about a thief named Hari Singh who would befriend people to rob them. He met Anil, a writer in a wrestling match and asked him for employment. They started living together and he would get daily supplies from the money Anil gave him. Anil trusted him completely and taught him how to write his name and add numbers. In one such occasion, when Anil received payment for his write-up, Hari betrayed him, stole the money and ran away. Soon enough, he understood his mistake, returned to Anil’s house and kept the money in the same place. He realised that it would not be wise to betray Anil’s trust and decided to amend his ways to become a true and faithful gentleman.

Who does ‘I’ refer to in this story?

In the story, ‘I’ refers to the narrator of the story Hari Singh, who was a fifteen-year-old experienced thief.

What is he “a fairly successful hand” at?

He is “a fairly successful hand” at stealing and robbing people. By this he meant that he was an experienced thief who was very swift and clean in his work while robbing people without getting caught.

What does he get from Anil in return for his work?

When Hari approached Anil for work, Anil told him clearly that he could not pay him for it. So, he asked Hari to cook so that he could feed him and stay with him. But when he found out that the young boy didn’t know how to cook, he taught him to cook and how to write his name. Anil also promised to teach him to write whole sentences and calculate numbers. Besides, Anil also gave money to Hari to buy the daily supplies, and the latter would make a rupee profit a day from it.

How does the thief think Anil will react to the theft?

Hari, the thief, thought that on discovering his theft, Anil would be filled with sadness not because of the loss of money, but for losing the trust he had in him.

What does he say about the different reactions of people when they are robbed?

In his short career as a thief, Hari’s experience had made him aware of the different reactions of people when they were robbed. According to him, a greedy man showed fear; a rich man exhibited anger and a poor man showed acceptance.

Does Anil realise that he has been robbed?

Yes, Anil realised that he had been robbed by Hari. He probably came to know of it from the damp notes which got wet due to rain the previous night. However, he didn’t express anything and gave a fifty rupee note to Hari, and promised to pay him regularly.

What are Hari Singh’s reactions to the prospect of receiving an education? Do they change over time? (Hint: Compare, for example, the thought: “I knew that once I could write like an educated man there would be no limit to what I could achieve” with these later thoughts: “Whole sentences, I knew, could one day bring me more than a few hundred rupees. It was a simple matter to steal — and sometimes just as simple to be caught. But to be a really big man, a clever and respected man, was something else.”) What makes him return to Anil?

Hari was grateful to Anil who taught him how to write his name. He was excited to learn that Anil would teach him to write whole sentences too. He understood that being an educated man would add to his abilities, and help him to achieve a high social status in life. However, when he stole money and left Anil’s house, he realised that being educated was a more fulfilling experience, and that stealing was a crime, and that he might soon get caught. He visualised the respect, reputation and possibilities that he would be able to achieve if he became educated. Hence, he was feeling guilty for cheating a noble man who gave him food and shelter. In addition,  his urge to receive education also compelled him to return to Anil’s house.

Why does not Anil hand the thief over to the police? Do you think most people would have done so? In what ways is Anil different from such employers?

Unlike others, Anil did not call the police and hand over Hari on theft charges. He was well aware of the theft from the damp notes but he did not thrash him or even mention it in front of Hari. He was happy that Hari had realised his mistake and understood the importance of education in life.

In today’s world, it is difficult to find people like Anil. Most people would not react in the same manner as he did. He was very patient and considerate towards Hari as he wanted him to become an educated man and lead his life respectfully.

Anil was different from other such employers because he was very understanding and compassionate by nature. When Hari returned with the money, it gave him the hope that Hari wanted to amend his ways and grow up to become a noble and literate man.

Do you think people like Anil and Hari Singh are found only in fiction, or are there such people in real life?

In the real world, people like Anil and Hari Singh rarely exist and are mostly found in fiction only. However, there may be an exception sometimes when we may come across people like Anil. From the story, we know that Anil was a kind-hearted and considerate person who was deeply concerned about Hari’s education and future. When Hari stole Anil’s money, his conscience pricked him and he had a change of mind, and realised the importance of education for his future. Hence, finding such kind of imaginary characters is a rare possibility in today’s world.

Do you think it a significant detail in the story that Anil is a struggling writer? Does this explain his behaviour in any way?

Yes, it is obvious that a significant detail in the story shows Anil was a struggling writer. His lifestyle was simple with irregular income,and he always spent money as per his capabilities. He made money sporadically. He would borrow one week, lend the next. He kept worrying about his next cheque, but as soon as it arrived he would go out and celebrate with his friends. Hari observed that Anil was unable to pay him a salary because he did not have a regular source of income. However, Hari felt that although Anil earned less, he never ill-treated him and was quite considerate towards him.

Have you met anyone like Hari Singh? Can you think and imagine the circumstances that can turn a fifteen-year-old boy into a thief?

No, I haven’t met anyone like Hari Singh but such kind of people do exist in the world. Many a time, a fifteen-year-old boy may be forced under unavoidable circumstances to become a robber. Mostly people commit crime to feed themselves or their families, or sometimes to satisfy their urge or addiction. It may also be to maintain their health or to fulfil their demands to lead a luxurious life and so on and so forth.

Where is the story set? (You can get clues from the names of the persons and places mentioned in it.) Which language or languages are spoken in these places? Do you think the characters in the story spoke to each other in English?

The story is set near Lucknow somewhere in Uttar Pradesh. We understand this from the story when it mentions a railway station for an Express train to Lucknow. The presence of sweet shops, mandis and bazaars also indicate it to be a small and simple town. We can assume that characters in the story were not speaking to each other in English but probably in Hindi language.

What are the key features of NCERT Solutions for Class 10 Supplementary English Chapter 2?

How is NCERT Solutions for Class 10 Supplementary English Chapter 2 helpful from an exam perspective?

NCERT Solutions for Class 10 Supplementary English Chapter 2 is the most popular study material used by the students to refer for the board exams. Practising these solutions help the students to top the final exams and ace a subject. These solutions are devised, based on the most updated NCERT Solutions for Class 10 Supplementary English Syllabus, covering all the crucial topics of the respective subject.

Which is the best site to study NCERT Solutions for Class 10 Supplementary English Chapter 2?

For NCERT Class 10 English Solutions, you can visit the BYJU’S website, where you can get step by step answers to all the questions provided in the NCERT textbook. Hence, students of Class 10 should learn all the concepts provided in the syllabus to understand the crucial topics.