NCERT Solutions for Class 10 English Supplementary Chapter 5 comprises one prose – “Footprints without Feet” well structured by the faculty at BYJU’S. The NCERT Solutions of Class 10 are designed by our panel of expert teachers to provide the most accurate solutions for Class 10 students. The solutions are written in simple English to help students build an in-depth understanding of this unit, and guide them to attempt all the questions of the exam with utmost confidence, and score good grades.

Students having queries about the method of answering the questions can make use of NCERT Solutions for Class 10 English Footprints without Feet, which are available in PDF format. The NCERT Solutions can be referred to while answering the textbook questions to master the subject without fear. Learning the chapters on a regular basis improves the logical and analytical thinking abilities among students, which are important from the exam point of view. 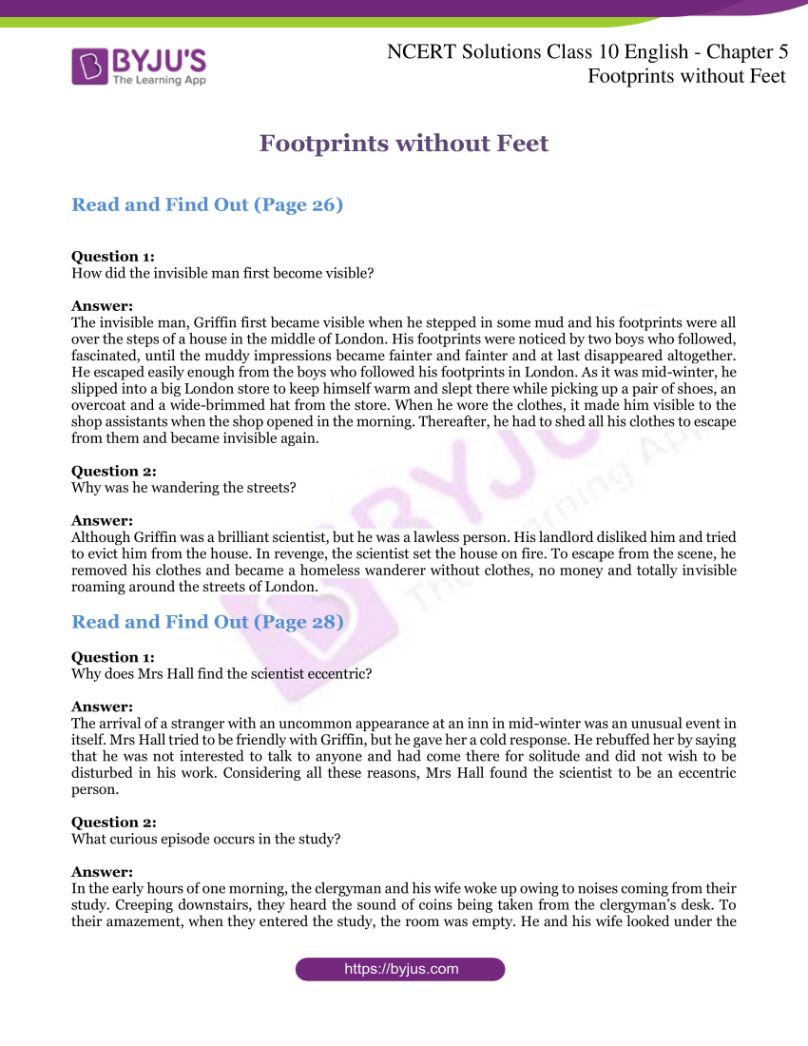 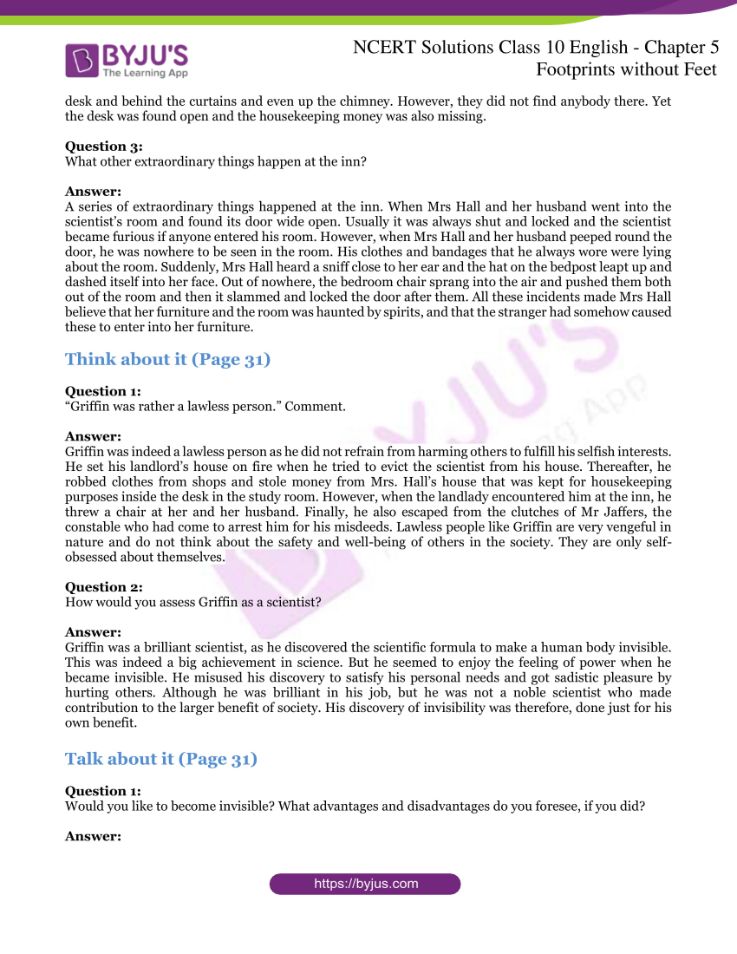 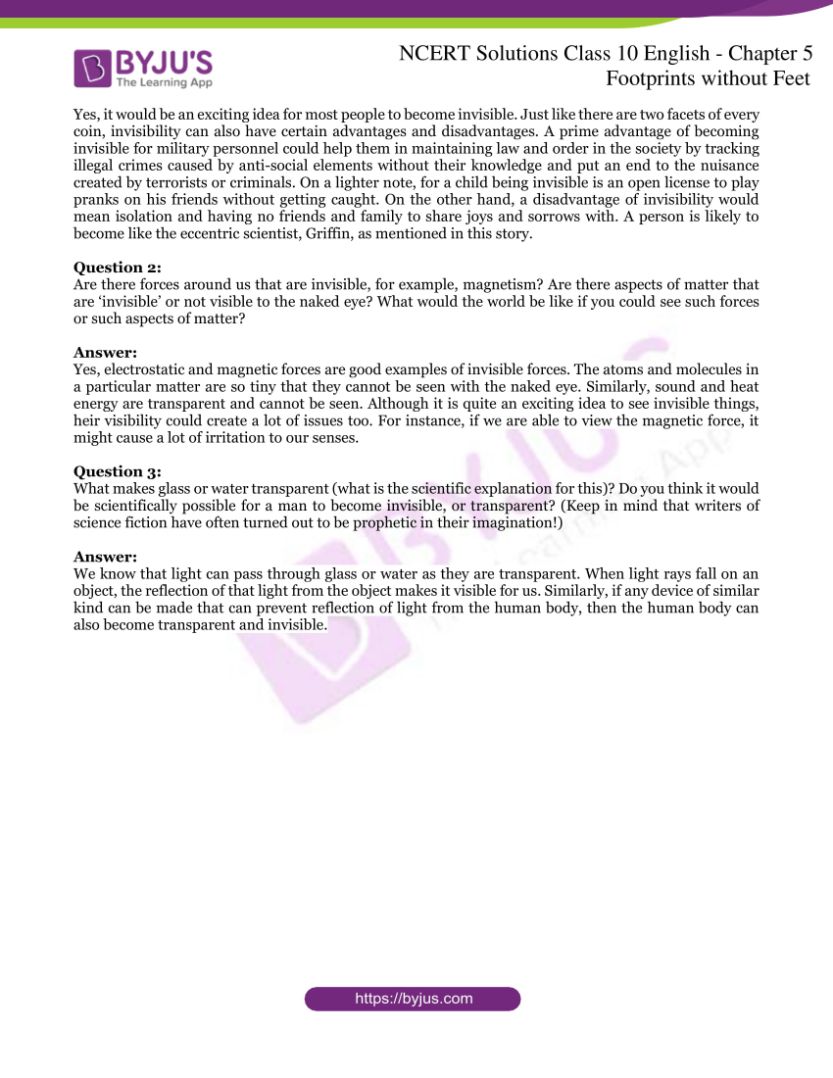 Footprints without feet depicts the story of an erratic scientist, Griffin, who discovered a major scientific drug that could make a human body become invisible. However, instead of using his theory for the greater welfare of the society, he misused it and became a lawless person. He set his landlord’s house on fire when he was asked to evict the house. Thereafter, he robbed clothes from a store and stole money at an inn from a clergyman’s desk that was meant for housekeeping purposes. Further, when a constable tried to arrest him for the nuisance caused by him, he escaped from the scene and was untraceable. This story therefore narrates how an unlawful scientist exploited the rare drug that made him invisible and troubled the surrounding people, instead of using it for the greater benefit of the society.

How did the invisible man first become visible?

The invisible man, Griffin first became visible when he stepped in some mud and his footprints were all over the steps of a house in the middle of London. His footprints were noticed by two boys who followed, fascinated, until the muddy impressions became fainter and fainter and at last disappeared altogether. He escaped easily enough from the boys who followed his footprints in London. As it was mid-winter, he slipped into a big London store to keep himself warm and slept there while picking up a pair of shoes, an overcoat and a wide-brimmed hat from the store. When he wore the clothes, it made him visible to the shop assistants when the shop opened in the morning. Thereafter, he had to shed all his clothes to escape from them and became invisible again.

Why was he wandering the streets?

Although Griffin was a brilliant scientist, but he was a lawless person. His landlord disliked him and tried to evict him from the house. In revenge, the scientist set the house on fire. To escape from the scene, he removed his clothes and became a homeless wanderer without clothes, no money and totally invisible, roaming around the streets of London.

Why does Mrs Hall find the scientist eccentric?

The arrival of a stranger with an uncommon appearance at an inn in mid-winter was an unusual event in itself. Mrs Hall tried to be friendly with Griffin, but he gave her a cold response. He rebuffed her by saying that he was not interested to talk to anyone and had come there for solitude and did not wish to be disturbed in his work. Considering all these reasons, Mrs Hall found the scientist to be an eccentric person.

What curious episode occurs in the study?

In the early hours of one morning, the clergyman and his wife woke up owing to noises coming from their study. Creeping downstairs, they heard the sound of coins being taken from the clergyman’s desk. To their amazement, when they entered the study, the room was empty. He and his wife looked under the desk and behind the curtains and even up the chimney. However, they did not find anybody there. Yet the desk was found open and the housekeeping money was also missing.

What other extraordinary things happen at the inn?

A series of extraordinary things happened at the inn. When Mrs Hall and her husband went into the scientist’s room, they found its door wide open. Usually it was always shut and locked and the scientist became furious if anyone entered his room. However, when Mrs Hall and her husband peeped round the door, he was nowhere to be seen in the room. His clothes and bandages that he always wore were lying about the room. Suddenly, Mrs Hall heard a sniff close to her ear and the hat on the bedpost leapt up and dashed itself into her face. Out of nowhere, the bedroom chair sprang into the air and pushed them both out of the room and then it slammed and locked the door after them. All these incidents made Mrs Hall believe that her furniture and the room was haunted by spirits, and that the stranger had somehow caused these to enter into her furniture.

Griffin was indeed a lawless person as he did not refrain from harming others to fulfill his selfish interests. He set his landlord’s house on fire when he tried to evict the scientist from his house. Thereafter, he robbed clothes from shops and stole money from Mrs. Hall’s house that was kept for housekeeping purposes inside the desk in the study room. However, when the landlady encountered him at the inn, he threw a chair at her and her husband. Finally, he also escaped from the clutches of Mr Jaffers, the constable who had come to arrest him for his misdeeds. Lawless people like Griffin are very vengeful in nature and do not think about the safety and well-being of others in the society. They are only self-obsessed, thinking about themselves.

How would you assess Griffin as a scientist?

Griffin was a brilliant scientist, as he discovered the scientific formula to make a human body invisible. This was indeed a big achievement in science. But he seemed to enjoy the feeling of power when he became invisible. He misused his discovery to satisfy his personal needs and got sadistic pleasure by hurting others. Although he was brilliant in his job, but he was not a noble scientist who made contribution to the larger benefit of society. His discovery of invisibility was therefore, done just for his own benefit.

Would you like to become invisible? What advantages and disadvantages do you foresee, if you did?

Yes, it would be an exciting idea for most people to become invisible. Just like there are two facets of every coin, invisibility can also have certain advantages and disadvantages. A prime advantage of becoming invisible for military personnel could help them in maintaining law and order in the society by tracking illegal crimes caused by anti-social elements without their knowledge and put an end to the nuisance created by terrorists or criminals. On a lighter note, for a child being invisible is an open license to play pranks on his friends without getting caught. On the other hand, a disadvantage of invisibility would mean isolation and having no friends and family to share joys and sorrows with. A person is likely to become like the eccentric scientist, Griffin, as mentioned in this story.

Are there forces around us that are invisible, for example, magnetism? Are there aspects of matter that are ‘invisible’ or not visible to the naked eye? What would the world be like if you could see such forces or such aspects of matter?

Yes, electrostatic and magnetic forces are good examples of invisible forces. The atoms and molecules in a particular matter are so tiny that they cannot be seen with the naked eye. Similarly, sound and heat energy are transparent and cannot be seen. Although it is quite an exciting idea to see invisible things, heir visibility could create a lot of issues too. For instance, if we are able to view the magnetic force, it might cause a lot of irritation to our senses.

What makes glass or water transparent (what is the scientific explanation for this)? Do you think it would be scientifically possible for a man to become invisible, or transparent? (Keep in mind that writers of science fiction have often turned out to be prophetic in their imagination!)

We know that light can pass through glass or water as they are transparent. When light rays fall on an object, the reflection of that light from the object makes it visible for us. Similarly, if any device of similar kind can be made that can prevent reflection of light from the human body, then the human body can also become transparent and invisible.

The solution module of Chapter 5 has been set by the expert teachers at BYJU’S who possess vast experience in the subject. The PDF of solutions contains answers to the questions as per the prescribed textbook of the latest CBSE board. The chapter wise solutions are available in PDF format which can be downloaded by the students and used whenever necessary. The faculty at BYJU’S have designed the NCERT Solutions for Class 10 English Chapter 5 Footprints without Feet in such a manner to boost the confidence among students while preparing for the 2022-23 board exams. The NCERT Solutions for Class 10 English are created in a simple language to make learning easier for the students. The main objective of providing chapter wise solutions is to boost the students with their exam preparation and to score well.

Chapter 5 Footprints without Feet of NCERT Solutions for Class 10 provides answers in the solutions PDF and are written by highly experienced faculty of the subject at BYJU’S, as per the CBSE guidelines and exam patterns. Students can comprehend the key topics better and score well in the board exams with this resource. Further, the solutions PDFs are available for free download and can be used while learning to answer the questions from the NCERT textbook.

Does the BYJU’S NCERT Solutions for Class 10 Supplementary English Chapter 5 provide accurate information for the board exam preparation?

The solutions offered by BYJU’S are accurate enough based on the guidelines set by the CBSE board. The faculty create the modules passionately, so that students can learn new topics with ease. NCERT Solutions are detailed yet easy to comprehend, making it interesting for the students to refresh the concepts after learning them. Students can access the PDF format of solutions which are available in BYJU’S with a free download option and score well in the board exams. The concepts are explained in an elaborate manner to help students grasp them without any difficulty.

How can I effectively use the NCERT Solutions for Class 10 Supplementary English Chapter 5?

Chapter 5 of the NCERT Solutions for Class 10 Supplementary English deals with footprints without feet prose. By learning the answers provided in the solutions PDF, students will be able to write precise as well as elaborate answers to the textbook questions by following the latest CBSE guidelines. Students can strongly rely on this resource for exam preparations since subject experts at BYJU’S have curated all the answers.