The chapter “The Cop and the Anthem” is a blend of humour, tragedy and motivation. Would one ever want to be in jail? If yes, what could be the possible reasons? A poor guy, Soapy, wishes his winters to be spent in jail so that he would have food, shelter and warmth. Much better than what he would have otherwise! Will he be able to make it to jail? Read the story and find out.

You can download these NCERT Solutions for Class 7 English in PDF format through the link provided below and enjoy learning anywhere, even when you are not connected to the internet. 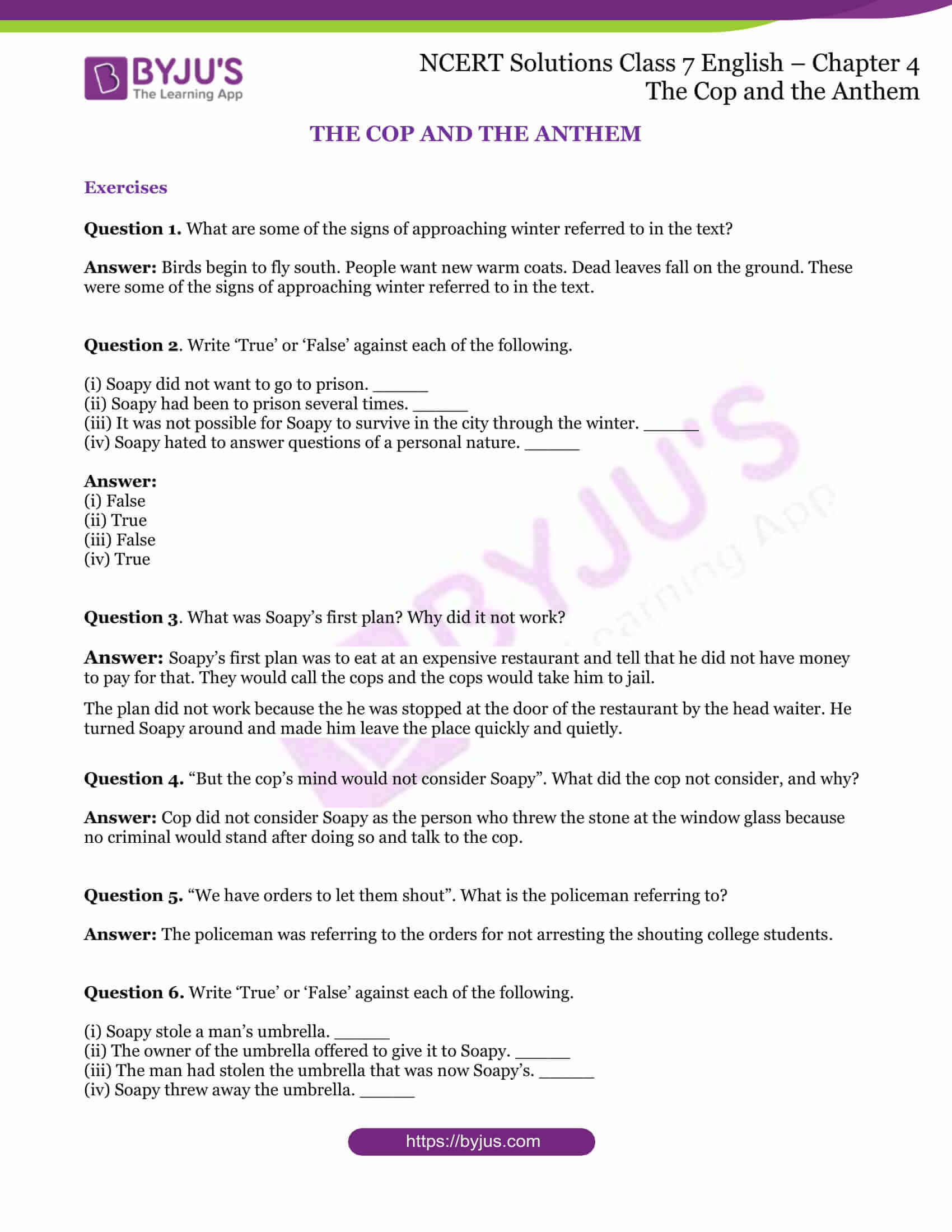 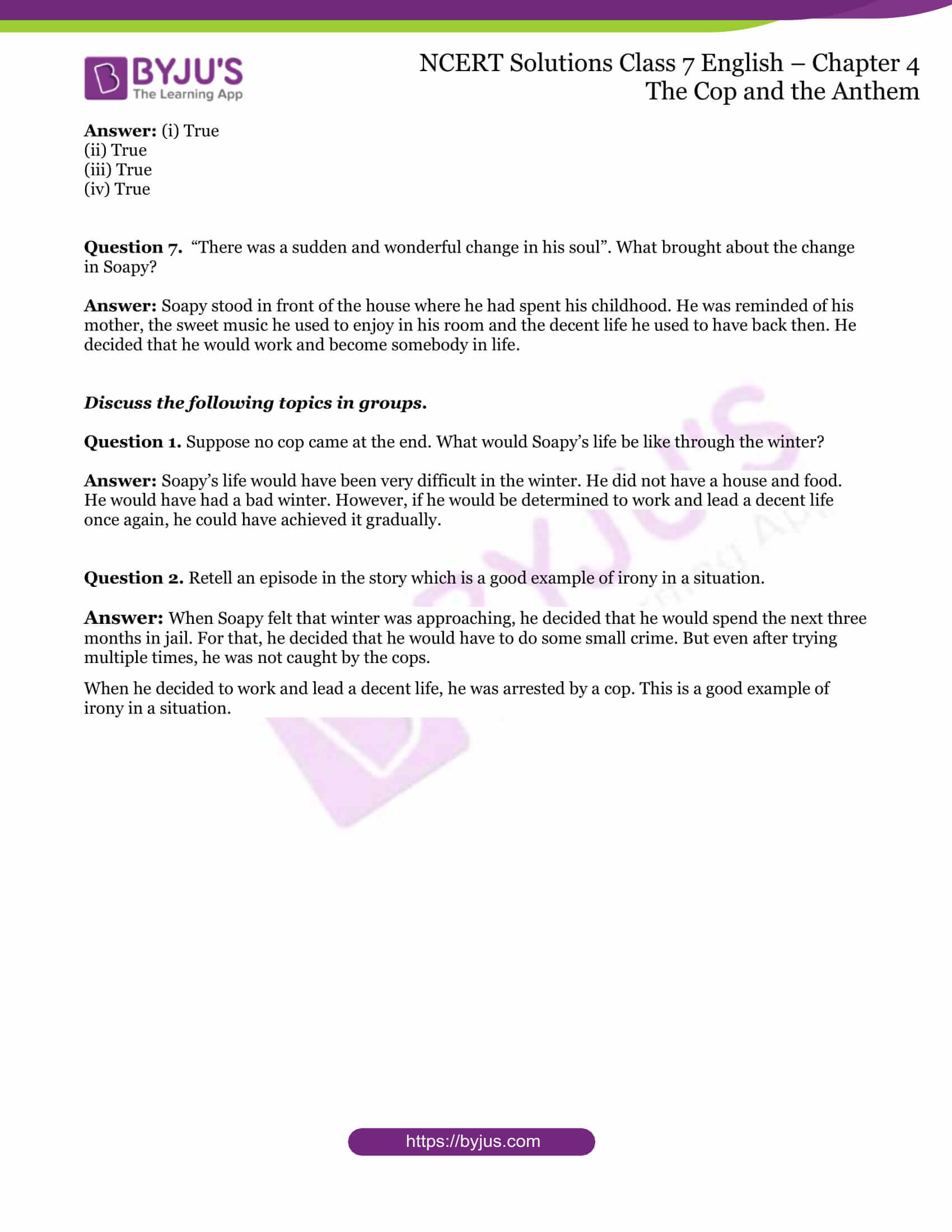 THE COP AND THE ANTHEM

The Cop and the Anthem

Question 1. What are some of the signs of approaching winter referred to in the text?

Answer: Birds begin to fly south. People want new warm coats. Dead leaves fall on the ground. These were some of the signs of approaching winter referred to in the text.

Question 2. Write ‘True’ or ‘False’ against each of the following.

(iii) It was not possible for Soapy to survive in the city through the winter. _____

(iv) Soapy hated to answer questions of a personal nature. _____

Question 3. What was Soapy’s first plan? Why did it not work?

Answer: Soapy’s first plan was to eat at an expensive restaurant and tell that he did not have money to pay for that. They would call the cops and the cops would take him to jail.

The plan did not work because the he was stopped at the door of the restaurant by the head waiter. He turned Soapy around and made him leave the place quickly and quietly.

Question 4. “But the cop’s mind would not consider Soapy”. What did the cop not consider, and why?

Answer: Cop did not consider Soapy as the person who threw the stone at the window glass because no criminal would stand after doing so and talk to the cop.

Question 5. “We have orders to let them shout”. What is the policeman referring to?

Answer: The policeman was referring to the orders for not arresting the shouting college students.

Question 6. Write ‘True’ or ‘False’ against each of the following.

Question 7. “There was a sudden and wonderful change in his soul”. What brought about the change in Soapy?

Answer: Soapy stood in front of the house where he had spent his childhood. He was reminded of his mother, the sweet music he used to enjoy in his room and the decent life he used to have back then. He decided that he would work and become somebody in life.

Question 1. Suppose no cop came at the end. What would Soapy’s life be like through the winter?

Answer: Soapy’s life would have been very difficult in the winter. He did not have a house and food. He would have had a bad winter. However, if he would be determined to work and lead a decent life once again, he could have achieved it gradually.

Question 2. Retell an episode in the story which is a good example of irony in a situation.

When he decided to work and lead a decent life, he was arrested by a cop. This is a good example of irony in a situation.

What does the irony of the situation mean as in Chapter 4 of NCERT Solutions for Class 7 English Supplementary?

The irony of the situation is that situation in which what happened was the opposite of what one expected. This is often embarrassing but one will realise that life is unpredictable next moment.

What were the signs which showed that winter is coming as described in Chapter 4 of NCERT Solutions for Class 7 English Supplementary?

The birds beginning to fly south, people wanting new warm coats and Soapy moving restlessly on his seat in the park are the signs that winter is near. Further, a dead leaf falling at Soapy’s feet was a special sign for him that winter was coming.

What did Soapy want most in the world as mentioned in Chapter 4 of NCERT Solutions for Class 7 English Supplementary?