Cricket is one of the most famous games in India. Who introduced it to us? When did the passion for cricket take its first step? Which was the Indian community that took up cricket? All of the answers are provided in the chapter “The Story of Cricket”. It also talks about how it is different from many other games and how it has evolved over time.

Download these NCERT Solutions for Class 7 English in PDF format through the link provided below and enjoy learning anytime, anywhere! 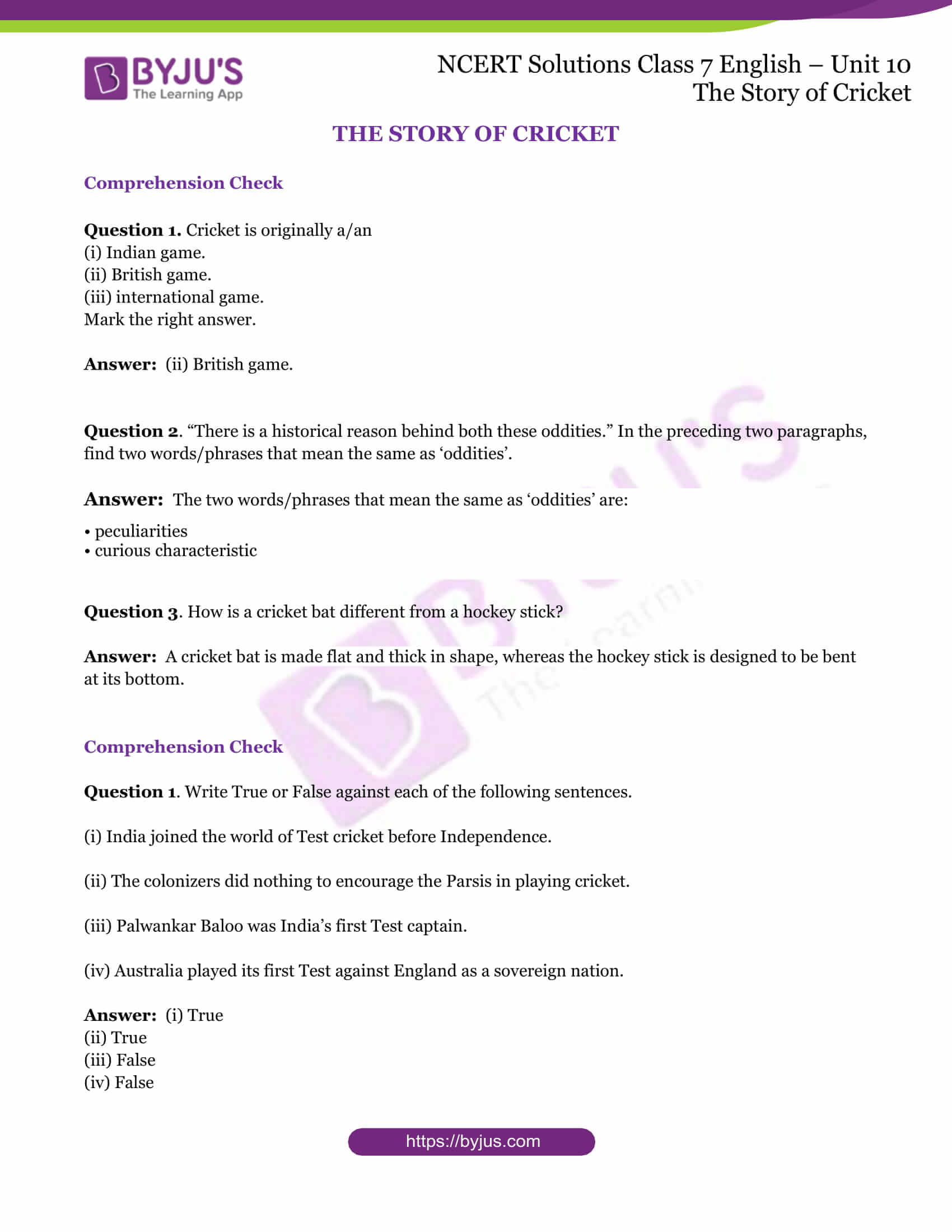 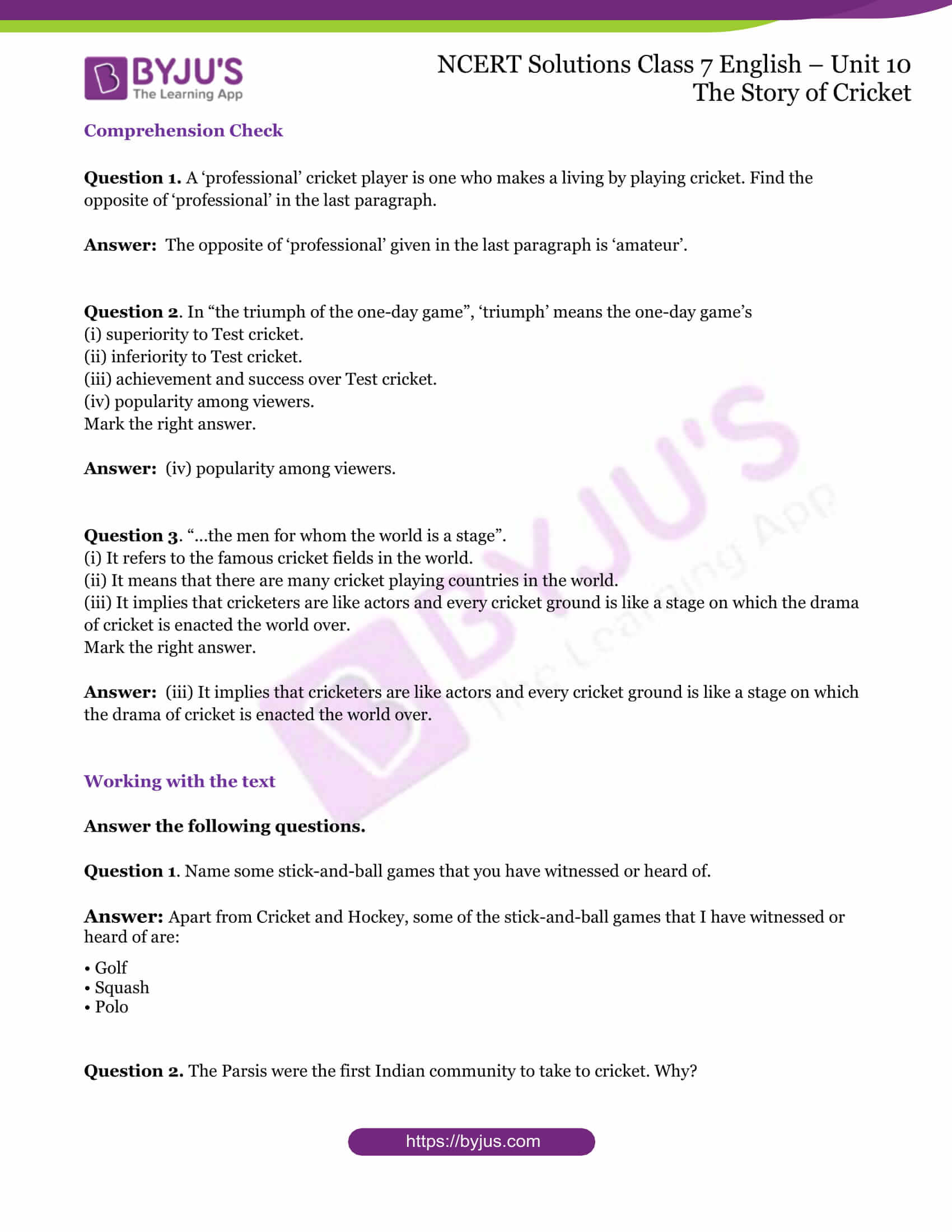 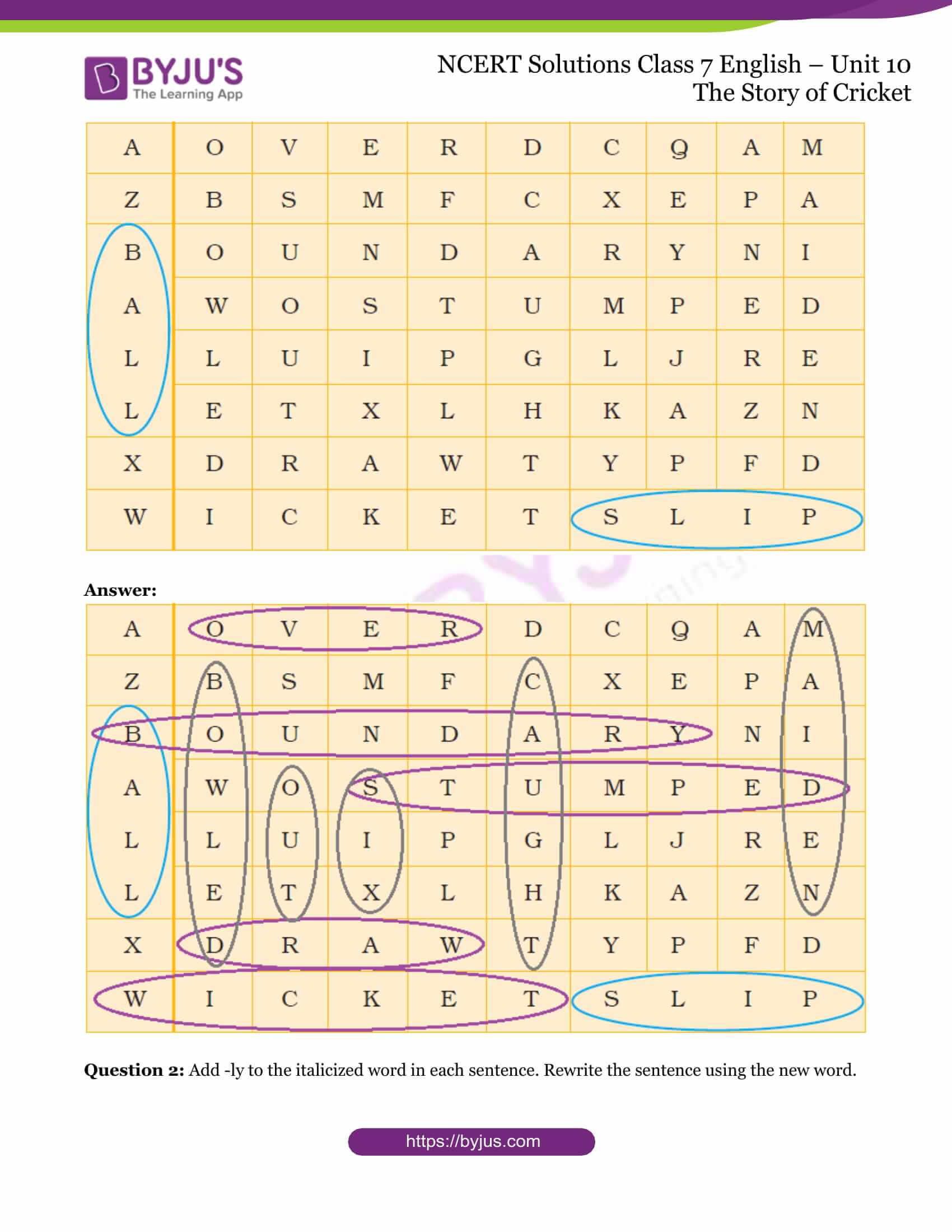 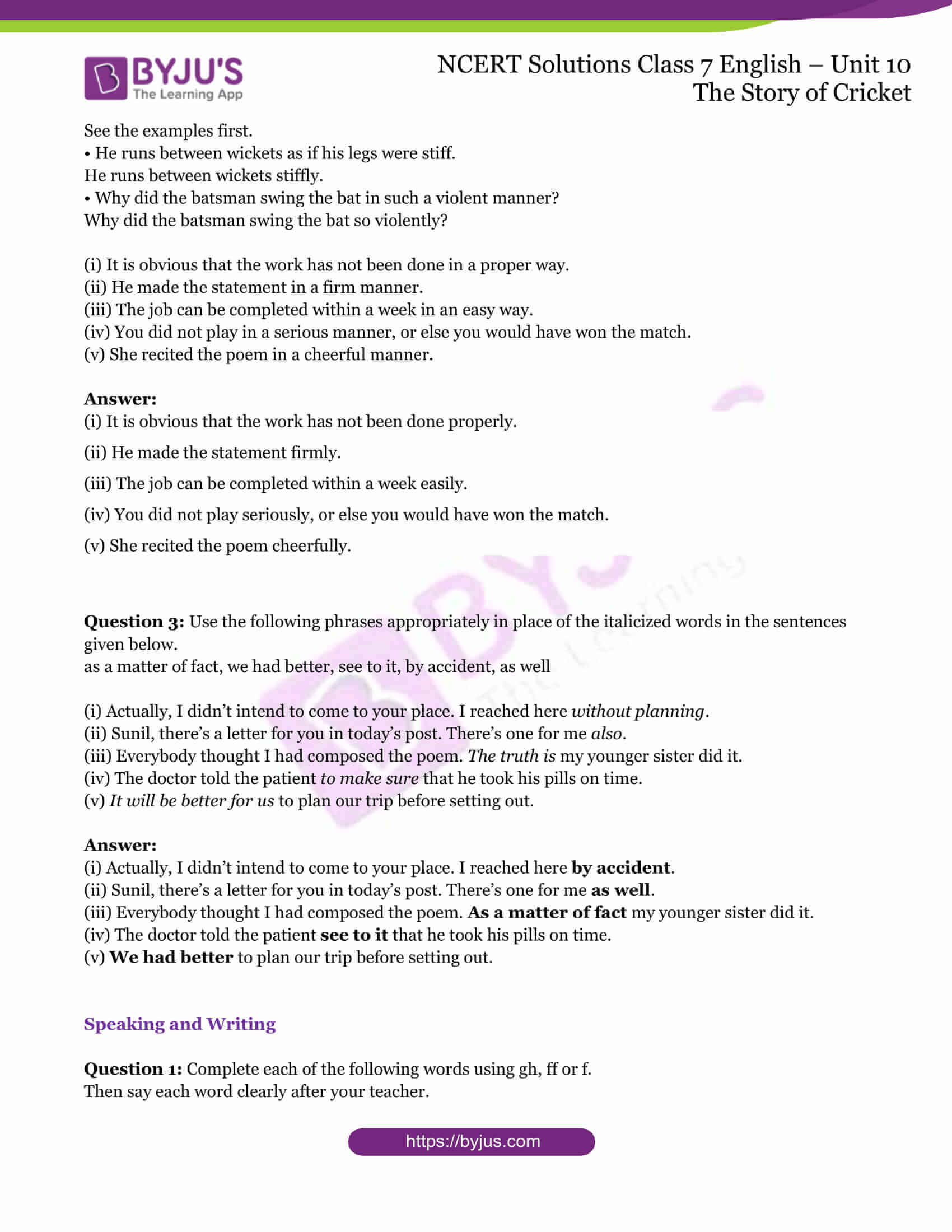 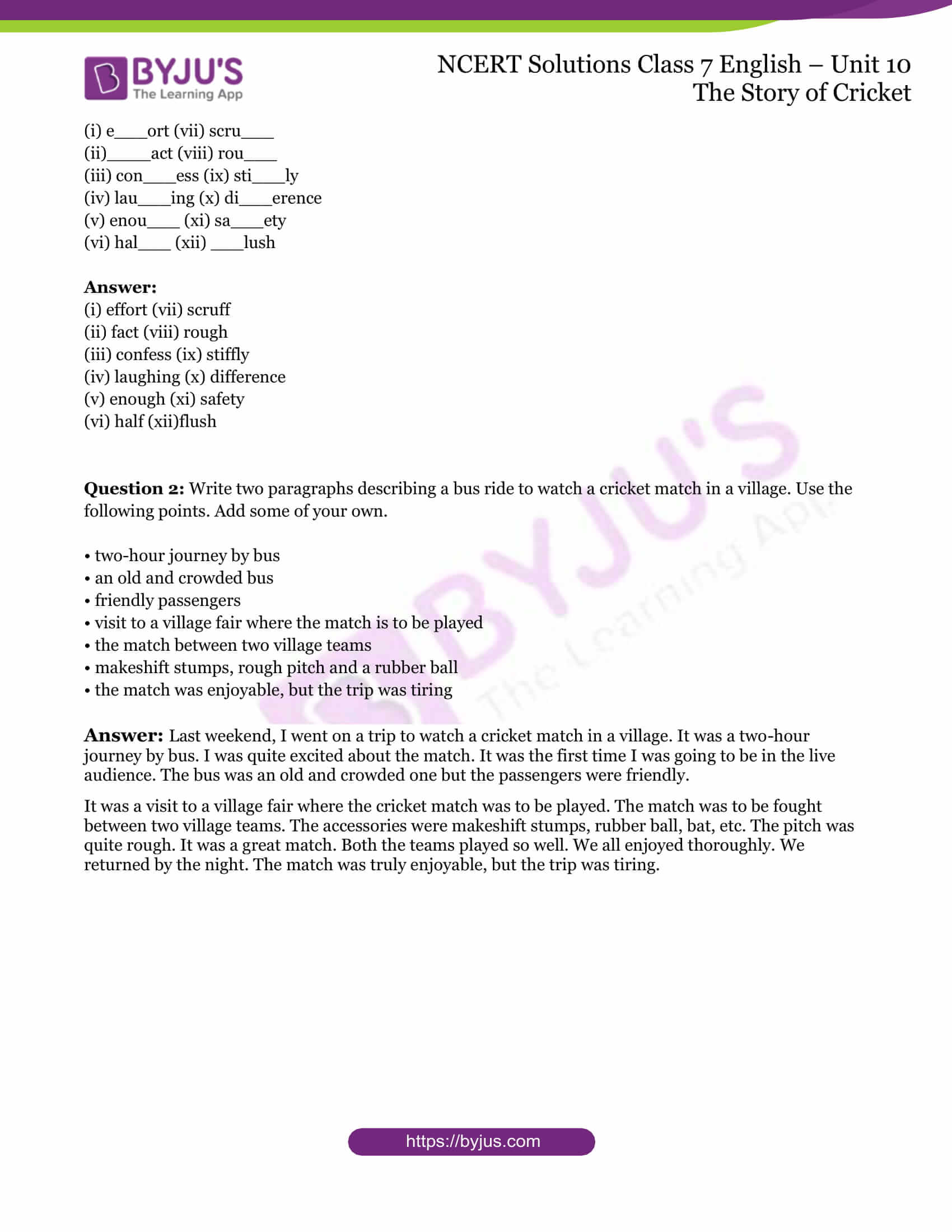 THE STORY OF CRICKET

The Story of Cricket

Question 2. “There is a historical reason behind both these oddities.” In the preceding two paragraphs, find two words/phrases that mean the same as ‘oddities’.

Answer: The two words/phrases that mean the same as ‘oddities’ are:

Question 3. How is a cricket bat different from a hockey stick?

Answer: A cricket bat is made flat and thick in shape, whereas the hockey stick is designed to be bent at its bottom.

Question 1. Write True or False against each of the following sentences.

(i) India joined the world of Test cricket before Independence.

(ii) The colonizers did nothing to encourage the Parsis in playing cricket.

(iv) Australia played its first Test against England as a sovereign nation.

Answer: The opposite of ‘professional’ given in the last paragraph is ‘amateur’.

(i) superiority to Test cricket.

(i) It refers to the famous cricket fields in the world.

(ii) It means that there are many cricket playing countries in the world.

(iii) It implies that cricketers are like actors and every cricket ground is like a stage on which the drama of cricket is enacted the world over.

Answer: (iii) It implies that cricketers are like actors and every cricket ground is like a stage on which the drama of cricket is enacted the world over.

Question 1. Name some stick-and-ball games that you have witnessed or heard of.

Answer: Apart from Cricket and Hockey, some of the stick-and-ball games that I have witnessed or heard of are:

Question 2. The Parsis were the first Indian community to take to cricket. Why?

Answer: The Parsis were the first Indian community to take to cricket. It was because of their interest in trade with the British.

Question 3. The rivalry between the Parsis and the Bombay Gymkhana had a happy ending for the former. What does ‘a happy ending’ refer to?

Answer: A happy ending refers to the victory of the Parsi Cricket Team over the Bombay Gymkhana in 1889, four years after the formation of the Indian National Congress.

Question 4. Do you think cricket owes its present popularity to television? Justify your answer.

Answer: Yes, I think cricket owes its present popularity to television. The information about how it is played and the interest of kids and youths into cricket is largely because of television and media. Young kids and youths from various parts of the country see, appreciate and dream of becoming a cricketer. All because of the media and television.

Question 5. Why has cricket a large viewership in India, not in China or Russia?

Answer: Cricket has a large viewership in India not in countries like China or Russia. This is because they were never colonized by the British. India is one of those countries which has been playing cricket from almost its inception.

Question 6. What do you understand by the game’s (cricket) ‘equipment’?

Answer: Game’s (cricket) ‘equipment’ means various accessories used during the game. For instance, in cricket, the equipment are: bat, ball, stumps, etc. There are also protective equipment such as gloves, helmet, pads, etc.

Question 7. How is Test cricket a unique game in many ways?

Answer: Test cricket is a unique game in many ways. It can be played for 5 days and still end with a draw! Other games do not take this much time. A football match usually gets over in an hour-and-a-half.

Question 8. How is cricket different from other team games?

Answer: Cricket is different from other team games because of many reasons. For instance, the length of the cricket pitch is defined to be 22 yards. But, the shape is not. It can be an oval pitch or a circular one. In most of the other games, the pitch dimensions are specified.

Question 9. How have advances in technology affected the game of cricket?

Answer: Cricket has become safer with technology. The protective equipment have become better. The cricket helmets are now made up of metal and synthetic materials that are easier to carry. Pads and gloves are made of vulcanized rubber.

Question 10. Explain how cricket changed with changing times and yet remained unchanged in some ways.

Answer: Cricket has changed with changing times. With the advent of technology it became safer. With the media and television around, it gained increasing popularity. Also, new formats such as T20 have been introduced.

Yet it remained unchanged in some ways. For instance, the rules and regulations continue to be the same. The way it is played is still the same.

• Twelve words associated with cricket are hidden in this grid.

• Six can be found horizontally and the remaining six vertically.

• Two words have been found for you.

Clues to the hidden words are given below.

Horizontal: six deliveries, four runs, attacked while out of arena, no result, stumps, fielder to the off side of the wicketkeeper

Vertical: stumps flying, back to the pavilion, a lofty one, mid-air mishap, not even one out of six, goes with bat 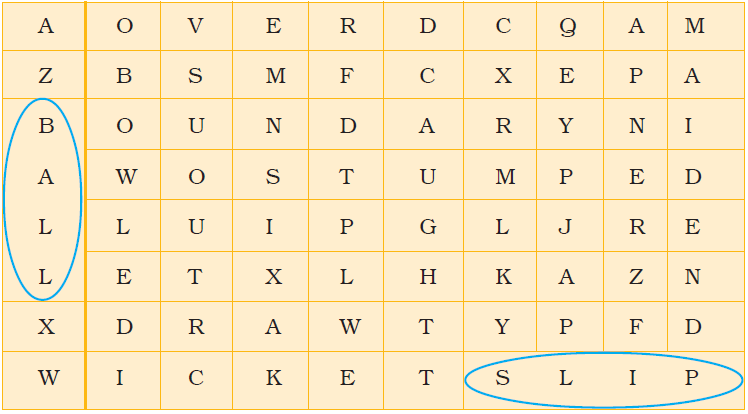 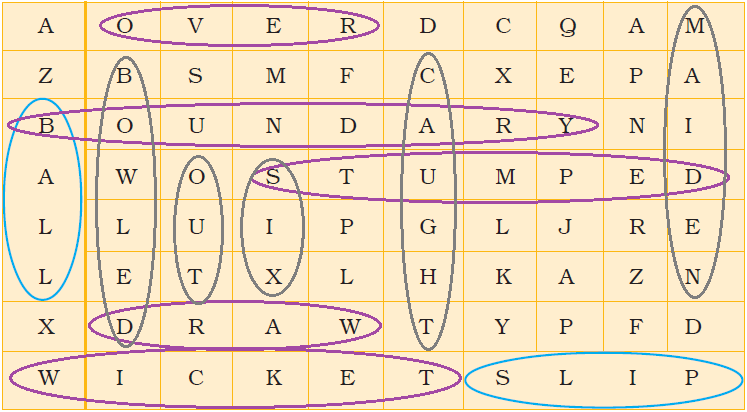 Question 2: Add -ly to the italicized word in each sentence. Rewrite the sentence using the new word.

• He runs between wickets as if his legs were stiff.

He runs between wickets stiffly.

• Why did the batsman swing the bat in such a violent manner?

Why did the batsman swing the bat so violently?

(i) It is obvious that the work has not been done in a proper way.

(ii) He made the statement in a firm manner.

(iii) The job can be completed within a week in an easy way.

(iv) You did not play in a serious manner, or else you would have won the match.

(v) She recited the poem in a cheerful manner.

(i) It is obvious that the work has not been done properly.

(ii) He made the statement firmly.

(iii) The job can be completed within a week easily.

(iv) You did not play seriously, or else you would have won the match.

(v) She recited the poem cheerfully.

Question 3: Use the following phrases appropriately in place of the italicized words in the sentences given below.

as a matter of fact, we had better, see to it, by accident, as well

(i) Actually, I didn’t intend to come to your place. I reached here without planning.

(ii) Sunil, there’s a letter for you in today’s post. There’s one for me also.

(iii) Everybody thought I had composed the poem. The truth is my younger sister did it.

(iv) The doctor told the patient to make sure that he took his pills on time.

(v) It will be better for us to plan our trip before setting out.

(i) Actually, I didn’t intend to come to your place. I reached here by accident.

(ii) Sunil, there’s a letter for you in today’s post. There’s one for me as well.

(iii) Everybody thought I had composed the poem. As a matter of fact my younger sister did it.

(iv) The doctor told the patient see to it that he took his pills on time.

(v) We had better to plan our trip before setting out.

Question 1: Complete each of the following words using gh, ff or f.

Then say each word clearly after your teacher.

Question 2: Write two paragraphs describing a bus ride to watch a cricket match in a village. Use the following points. Add some of your own.

• an old and crowded bus

• the match between two village teams

• the match was enjoyable, but the trip was tiring

Answer: Last weekend, I went on a trip to watch a cricket match in a village. It was a two-hour journey by bus. I was quite excited about the match. It was the first time I was going to be in the live audience. The bus was an old and crowded one but the passengers were friendly.

It was a visit to a village fair where the cricket match was to be played. The match was to be fought between two village teams. The accessories were makeshift stumps, rubber ball, bat, etc. The pitch was quite rough. It was a great match. Both the teams played so well. We all enjoyed thoroughly. We returned by the night. The match was truly enjoyable, but the trip was tiring.

How and from where did cricket evolve, as mentioned in Unit 10 of NCERT Solutions for Class 7 English?

Cricket evolved out of the many stick-and ball games that were played in England 500 years ago. The word ‘bat’ is an old English word that simply means stick or club. By the seventeenth century, cricket was recognisable as a distinct game.

What was the reason for the curved bottom of the bats until the mid of eighteenth century, as discussed in Unit 10 of NCERT Solutions for Class 7 English?

The reason was simple and that was for when the ball was bowled underarm, along the ground and the curve at the end of the bat gave the batsman the best chance of making contact.

List any two peculiarities of cricket as mentioned in Unit 10 of NCERT Solutions for Class 7 English.

The team sport, cricket is peculiar in its own ways and has curious characteristics. A few of them are:
1. A test match can go on for five days and still end in a draw. Interestingly, no other modern team sport takes even half as much time to complete.
2. The length of the cricket pitch is specified to be 22 yards, but the size or shape of the ground is not.