A rebel is someone who does not follow the orthodox norms. He/she builds his/her own ways. The poem “The Rebel” puts light on the same characteristics. It explains how a rebel does everything entirely different from others. Towards the end, the poet also says that although it is good to have rebels in society, it is not suggested to be one of them.

Find out more about the poem by solving questions and referring to the NCERT Solutions for Class 7 English through the link provided below. You can also download the same in PDF format. 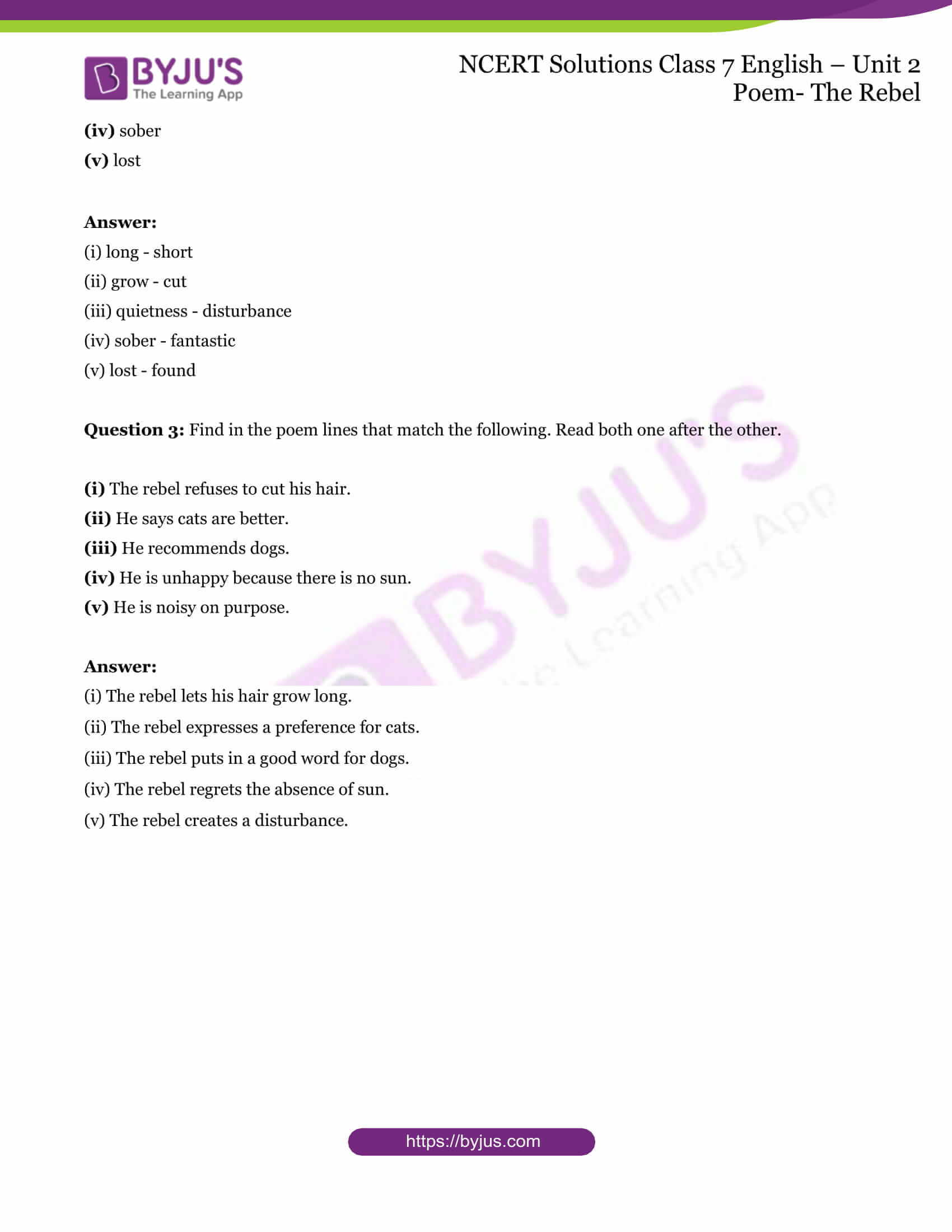 (i). If someone doesn’t wear a uniform to school, what do you think the teacher will say?

Answer: I think the teacher will scold the student if he/she does not wear a uniform to school.

(ii). When everyone wants a clear sky, what does the rebel want most?

Answer: When everyone wants a clear sky, the rebel wants the sun to show up.

(iii). If the rebel has a dog for a pet, what is everyone else likely to have?

Answer: If the rebel has a dog for a pet, everyone else is likely to have cats as pets.

Answer: It is good to have rebels because they make the society livelier, and they teach us to accept and respect the differences amongst the thought processes of people around us.

Answer: It is not good to be a rebel oneself because a rebel is always criticized by the society and people take time to accept rebels.

Answer: Yes, I would like to be a rebel because I want to change those norms of the society that do not serve humanity.

Question 2: Find in the poem an antonym (a word opposite in meaning) for each of the following words.

Question 3: Find in the poem lines that match the following. Read both one after the other.

(i) The rebel refuses to cut his hair.

(ii) He says cats are better.

(iv) He is unhappy because there is no sun.

(v) He is noisy on purpose.

(i) The rebel lets his hair grow long.

(ii) The rebel expresses a preference for cats.

(iii) The rebel puts in a good word for dogs.

(iv) The rebel regrets the absence of sun.

(v) The rebel creates a disturbance.

Who is a rebel as mentioned in Unit 2 Poem of NCERT Solutions for Class 7 English?

A rebel is a person who always disagrees with the common, or likes to do the opposite of what everyone thinks one should do. In other words, a rebel is someone who does not follow orthodox norms.

Mention a few things that the rebels do in the opposite as mentioned in Unit 2 Poem of NCERT Solutions for Class 7 English.

What did the poet conclude about having rebels in Unit 2 Poem of NCERT Solutions for Class 7 English?

Towards the end of the poem, the poet concluded that although it is good to have rebels in society, but it is not very good to be one of them.