You can download these NCERT Solutions for Class 7 English in PDF format by clicking the link provided below. 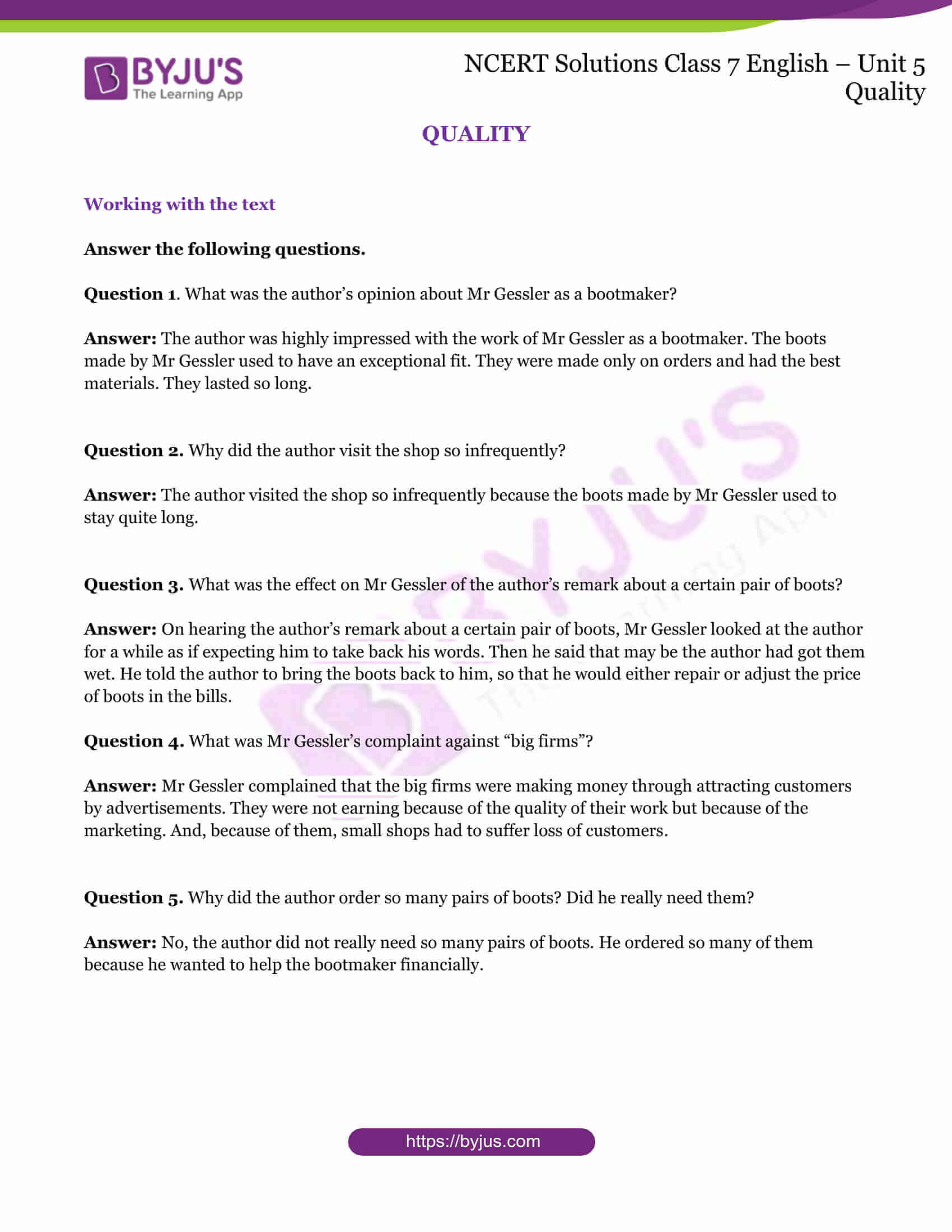 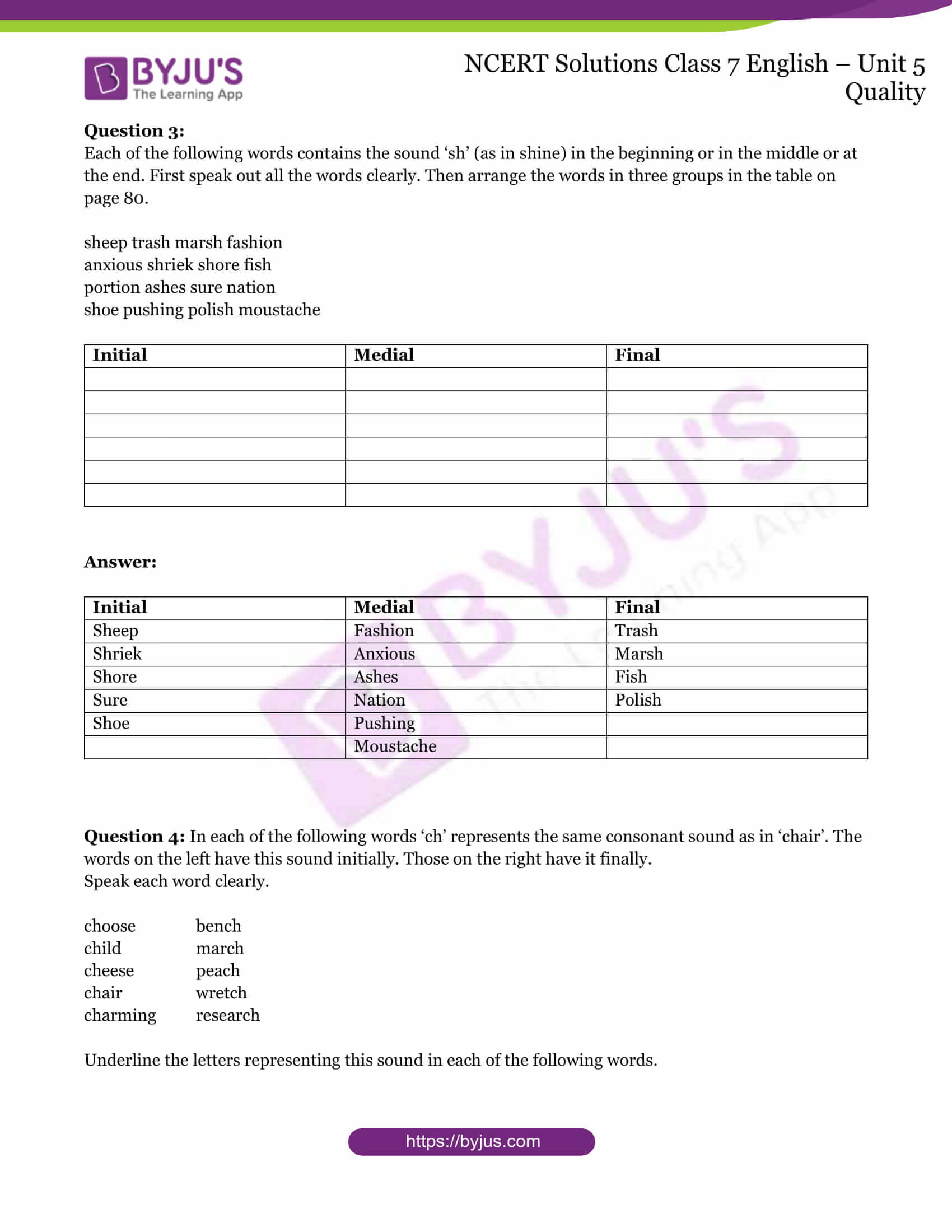 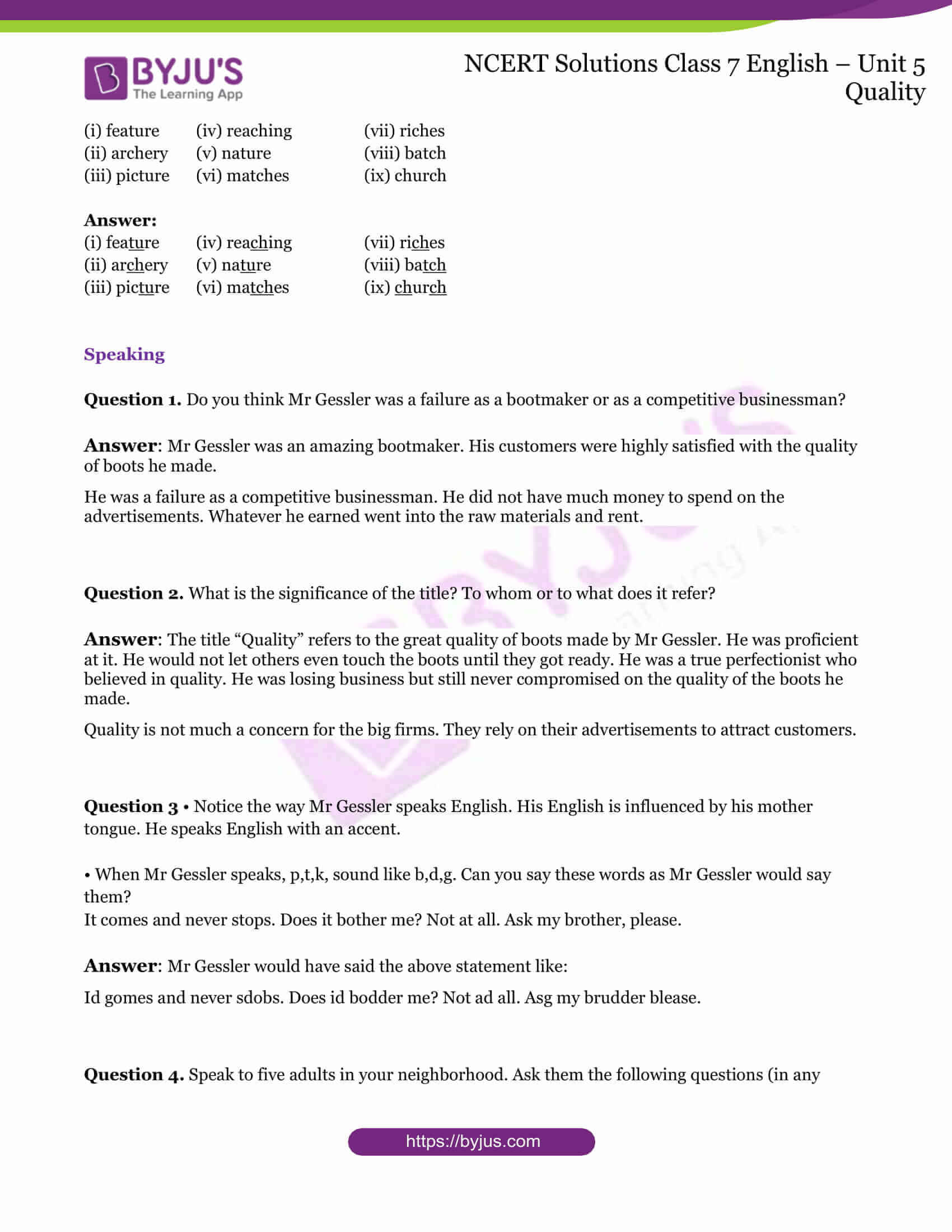 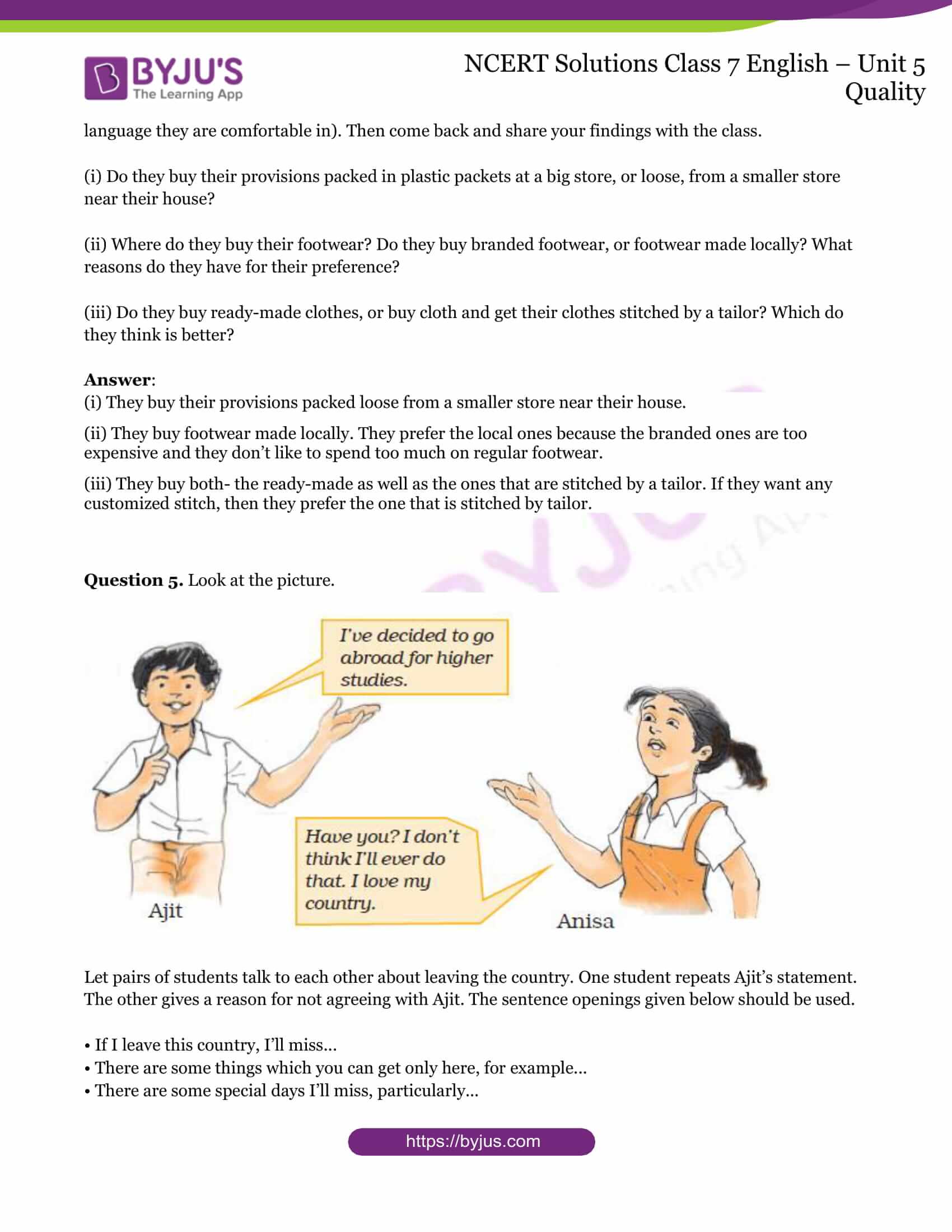 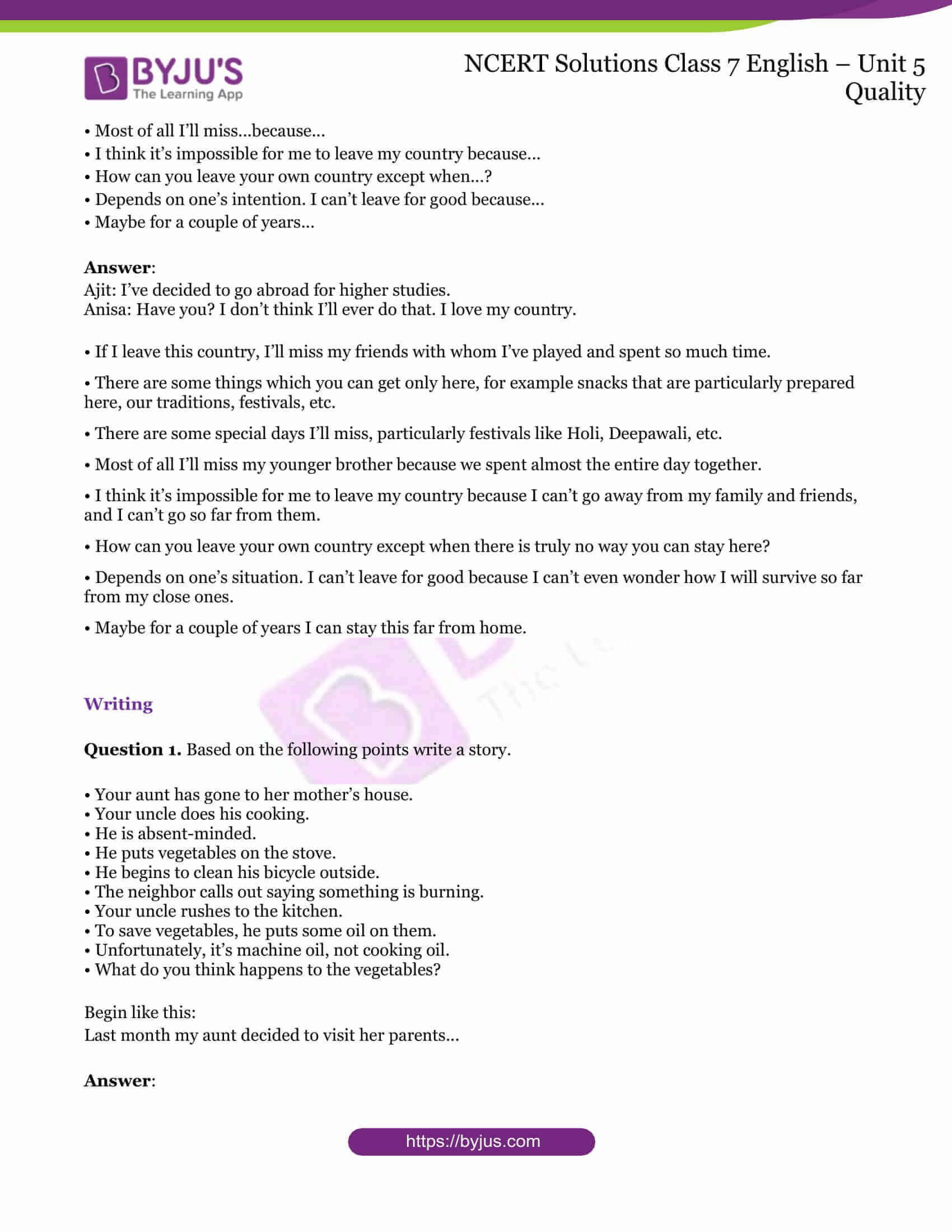 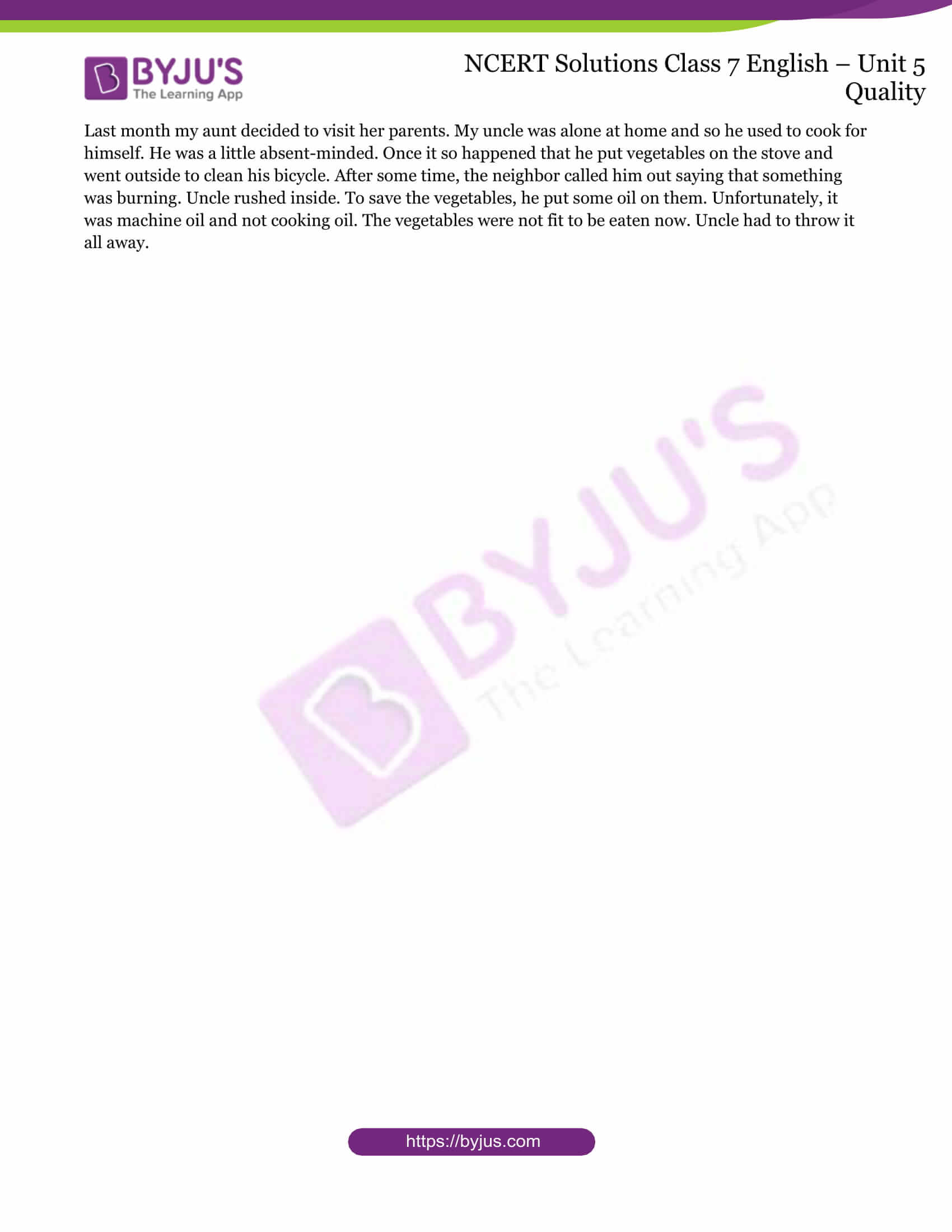 Question 1. What was the author’s opinion about Mr Gessler as a bootmaker?

Answer: The author was highly impressed with the work of Mr Gessler as a bootmaker. The boots made by Mr Gessler used to have an exceptional fit. They were made only on orders and had the best materials. They lasted so long.

Question 2. Why did the author visit the shop so infrequently?

Answer: The author visited the shop so infrequently because the boots made by Mr Gessler used to stay quite long.

Question 3. What was the effect on Mr Gessler of the author’s remark about a certain pair of boots?

Answer: On hearing the author’s remark about a certain pair of boots, Mr Gessler looked at the author for a while as if expecting him to take back his words. Then he said that may be the author had got them wet. He told the author to bring the boots back to him, so that he would either repair or adjust the price of boots in the bills.

Question 4. What was Mr Gessler’s complaint against “big firms”?

Answer: Mr Gessler complained that the big firms were making money through attracting customers by advertisements. They were not earning because of the quality of their work but because of the marketing. And, because of them, small shops had to suffer loss of customers.

Question 5. Why did the author order so many pairs of boots? Did he really need them?

Answer: No, the author did not really need so many pairs of boots. He ordered so many of them because he wanted to help the bootmaker financially.

Question 1. Study the following phrases and their meanings. Use them appropriately to complete the sentences that follow.

look after: take care of

look down on: disapprove or regard as inferior

look in (on someone): make a short visit

look out: be careful

look up to: admire

(i) After a very long spell of heat, the weather is looking up at last.

(ii) We have no right to look down people who do small jobs.

(iii) Nitin has always looked up his uncle, who is a self-made man.

(iv) The police are looking into the matter thoroughly.

(v) If you want to go out, I will look after the children for you.

(vi) I promise to look in on your brother when I visit Lucknow next.

(vi) Look out when you are crossing the main road.

Question 2: Read the following sets of words loudly and clearly.

Each of the following words contains the sound ‘sh’ (as in shine) in the beginning or in the middle or at the end. First speak out all the words clearly. Then arrange the words in three groups in the table on page 80.

Question 4: In each of the following words ‘ch’ represents the same consonant sound as in ‘chair’. The words on the left have this sound initially. Those on the right have it finally.

Underline the letters representing this sound in each of the following words.

Question 1. Do you think Mr Gessler was a failure as a bootmaker or as a competitive businessman?

Answer: Mr Gessler was an amazing bootmaker. His customers were highly satisfied with the quality of boots he made.

He was a failure as a competitive businessman. He did not have much money to spend on the advertisements. Whatever he earned went into the raw materials and rent.

Question 2. What is the significance of the title? To whom or to what does it refer?

Answer: The title “Quality” refers to the great quality of boots made by Mr Gessler. He was proficient at it. He would not let others even touch the boots until they got ready. He was a true perfectionist who believed in quality. He was losing business but still never compromised on the quality of the boots he made.

Quality is not much a concern for the big firms. They rely on their advertisements to attract customers.

• When Mr Gessler speaks, p,t,k, sound like b,d,g. Can you say these words as Mr Gessler would say them?

It comes and never stops. Does it bother me? Not at all. Ask my brother, please.

Answer: Mr Gessler would have said the above statement like:

Id gomes and never sdobs. Does id bodder me? Not ad all. Asg my brudder blease.

Question 4. Speak to five adults in your neighborhood. Ask them the following questions (in any language they are comfortable in). Then come back and share your findings with the class.

(i) Do they buy their provisions packed in plastic packets at a big store, or loose, from a smaller store near their house?

(ii) Where do they buy their footwear? Do they buy branded footwear, or footwear made locally? What reasons do they have for their preference?

(iii) Do they buy ready-made clothes, or buy cloth and get their clothes stitched by a tailor? Which do they think is better?

(i) They buy their provisions packed loose from a smaller store near their house.

(ii) They buy footwear made locally. They prefer the local ones because the branded ones are too expensive and they don’t like to spend too much on regular footwear.

(iii) They buy both- the ready-made as well as the ones that are stitched by a tailor. If they want any customized stitch, then they prefer the one that is stitched by tailor.

Question 5. Look at the picture. 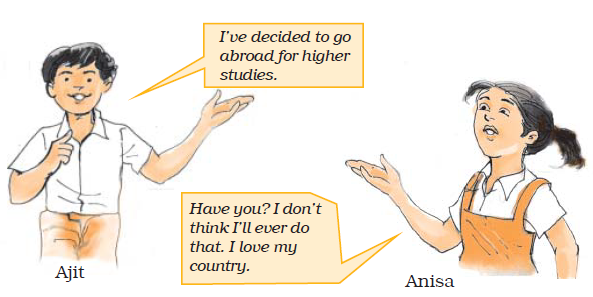 Let pairs of students talk to each other about leaving the country. One student repeats Ajit’s statement. The other gives a reason for not agreeing with Ajit. The sentence openings given below should be used.

• If I leave this country, I’ll miss…

• There are some things which you can get only here, for example…

• There are some special days I’ll miss, particularly…

• Most of all I’ll miss…because…

• How can you leave your own country except when…?

• Depends on one’s intention. I can’t leave for good because…

• Maybe for a couple of years…

Anisa: Have you? I don’t think I’ll ever do that. I love my country.

• If I leave this country, I’ll miss my friends with whom I’ve played and spent so much time.

• There are some things which you can get only here, for example snacks that are particularly prepared here, our traditions, festivals, etc.

• There are some special days I’ll miss, particularly festivals like Holi, Deepawali, etc.

• Most of all I’ll miss my younger brother because we spent almost the entire day together.

• I think it’s impossible for me to leave my country because I can’t go away from my family and friends, and I can’t go so far from them.

• How can you leave your own country except when there is truly no way you can stay here?

• Depends on one’s situation. I can’t leave for good because I can’t even wonder how I will survive so far from my close ones.

• Maybe for a couple of years I can stay this far from home.

Question 1. Based on the following points write a story.

• Your aunt has gone to her mother’s house.

• Your uncle does his cooking.

• He puts vegetables on the stove.

• He begins to clean his bicycle outside.

• The neighbor calls out saying something is burning.

• Your uncle rushes to the kitchen.

• To save vegetables, he puts some oil on them.

• What do you think happens to the vegetables?

Last month my aunt decided to visit her parents…

Last month my aunt decided to visit her parents. My uncle was alone at home and so he used to cook for himself. He was a little absent-minded. Once it so happened that he put vegetables on the stove and went outside to clean his bicycle. After some time, the neighbour called him out saying that something was burning. Uncle rushed inside. To save the vegetables, he put some oil on them. Unfortunately, it was machine oil and not cooking oil. The vegetables were not fit to be eaten now. Uncle had to throw it all away.

What is the outline of the story in Unit 5 of NCERT Solutions for Class 7 English?

The story in Unit 5 of NCERT Solutions for Class 7 English is about dedication to work of high quality with the passion of an artist and the eventual loss of art and quality in a world of competition and consumerism.

Whom did the author describe and was fond of as mentioned in Unit 5 of NCERT Solutions for Class 7 English?

When did Mr Gessler discuss the conditions and hardships of his trade in Unit 5 of NCERT Solutions for Class 7 English?

It was once when the author went absent-mindedly into Mr Gessler shop in a pair of boots that he bought in an emergency at some large firm. When Mr Gessler noticed it, he became as quiet that froze the blood. Later, Mr Gessler spoke long and bitterly about the conditions and hardships of his trade.