The chapter “Expert Detectives” is about two siblings who are concerned about a person whom they find very strange. The person never has visitors to his home, does not have friends, does not talk to people, is very gaunt and pays nice tips to Ramesh, who brings his food to his room. Thoughts about the strange man grow even messier when the siblings get to know that there is a specific visitor who comes every Sunday during lunchtime to meet the man. Students who are not able to answer the questions present in the textbook can use the NCERT Solutions from BYJU’S.

To help students frame authentic answers, the experts have designed the solutions in a comprehensive manner. The solutions are drafted in a simple language in order to help students understand the theme of the chapter irrespective of their intelligence quotient. You can download these NCERT Solutions for Class 7 English in PDF format for free by just clicking the link provided below. 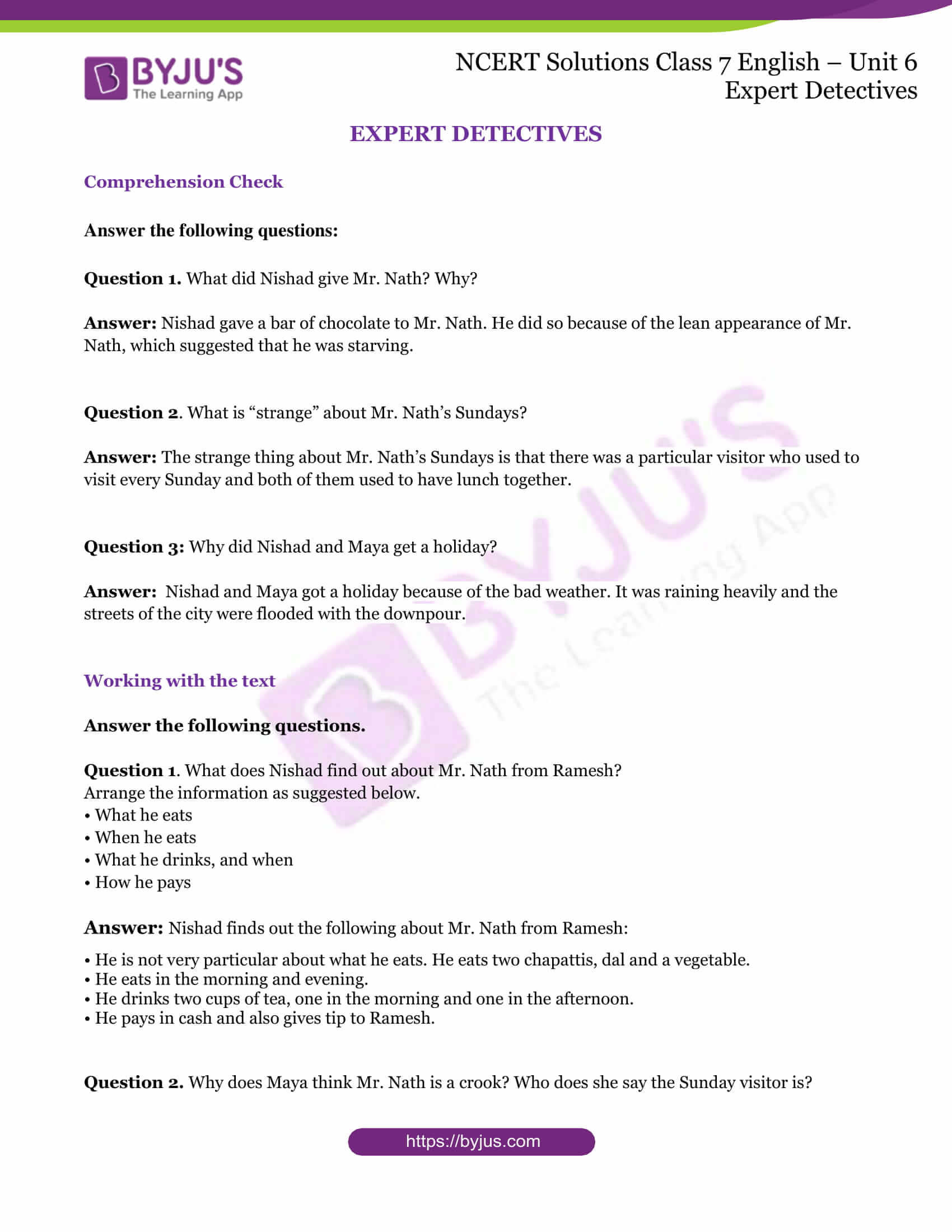 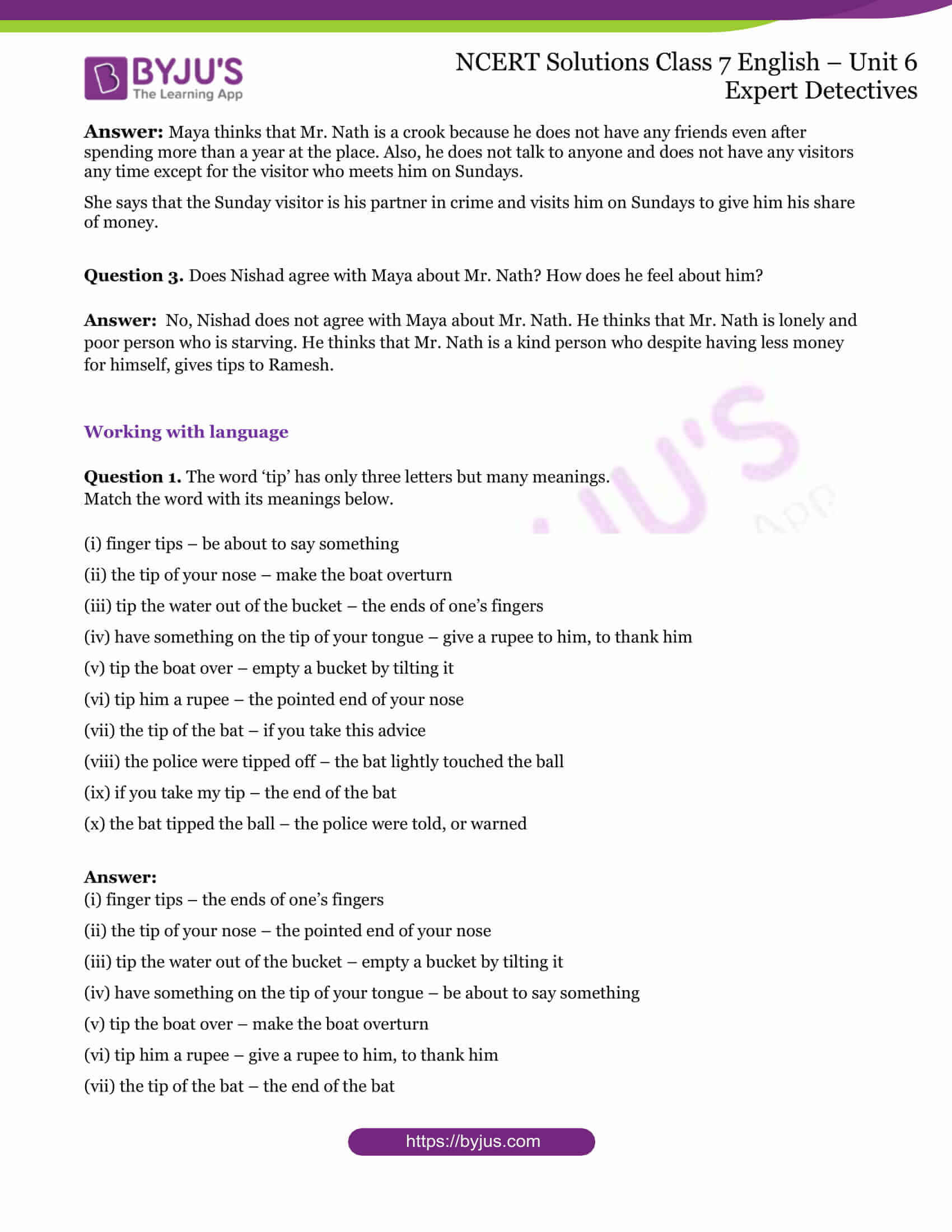 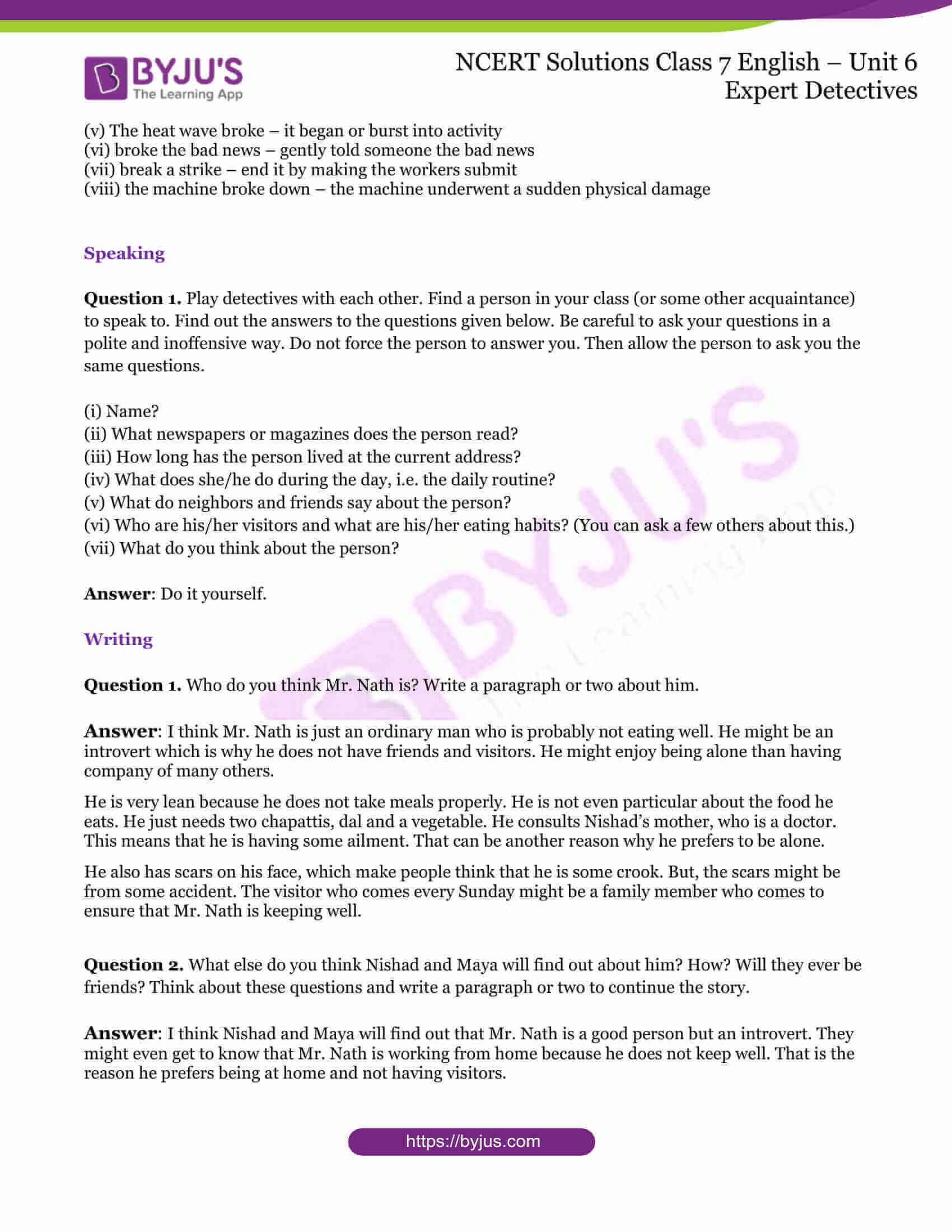 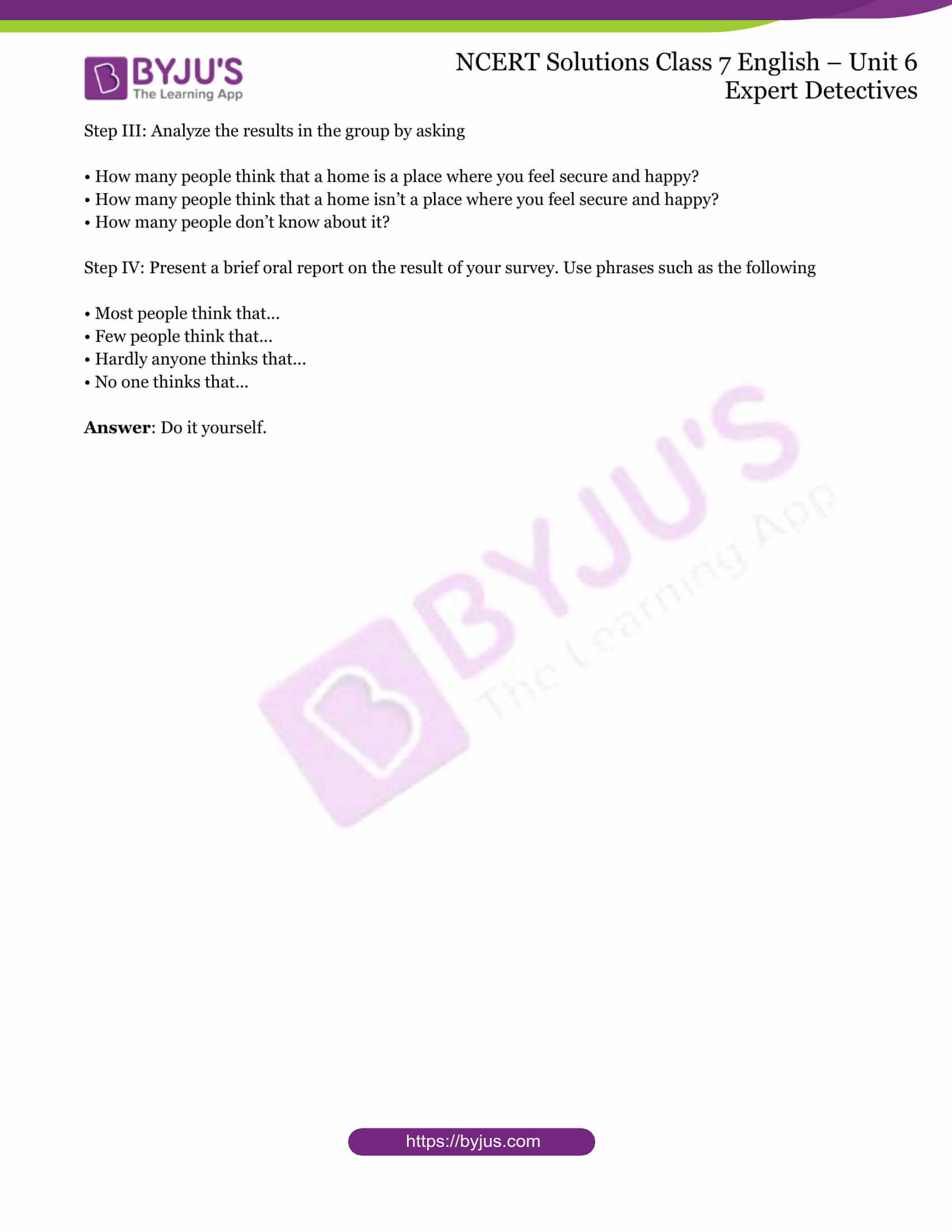 Question 1. What did Nishad give Mr. Nath? Why?

Answer: Nishad gave a bar of chocolate to Mr. Nath. He did so because of the lean appearance of Mr. Nath, which suggested that he was starving.

Question 2. What is “strange” about Mr. Nath’s Sundays?

Answer: The strange thing about Mr. Nath’s Sundays is that there was a particular visitor who used to visit every Sunday and both of them used to have lunch together.

Question 3: Why did Nishad and Maya get a holiday?

Answer: Nishad and Maya got a holiday because of the bad weather. It was raining heavily and the streets of the city were flooded with the downpour.

Question 1. What does Nishad find out about Mr. Nath from Ramesh?

Arrange the information as suggested below.

• What he drinks, and when

Answer: Nishad finds out the following about Mr. Nath from Ramesh:

• He is not very particular about what he eats. He eats two chapattis, dal and a vegetable.

• He eats in the morning and evening.

• He drinks two cups of tea, one in the morning and one in the afternoon.

• He pays in cash and also gives tip to Ramesh.

Question 2. Why does Maya think Mr. Nath is a crook? Who does she say the Sunday visitor is?

She says that the Sunday visitor is his partner in crime and visits him on Sundays to give him his share of money.

Question 3. Does Nishad agree with Maya about Mr. Nath? How does he feel about him?

Question 1. The word ‘tip’ has only three letters but many meanings.

Match the word with its meanings below.

(i) finger tips – be about to say something

(ii) the tip of your nose – make the boat overturn

(iv) have something on the tip of your tongue – give a rupee to him, to thank him

(v) tip the boat over – empty a bucket by tilting it

(vi) tip him a rupee – the pointed end of your nose

(vii) the tip of the bat – if you take this advice

(x) the bat tipped the ball – the police were told, or warned

(i) finger tips – the ends of one’s fingers

Question 2: The words helper, companion, partner and accomplice have very similar meanings, but each word is typically used in certain phrases. Can you fill in the blanks below with the most commonly used words? A dictionary may help you.

(ii) my companion on the journey

(iv) a faithful companion such as a dog

(viii) his accomplice in his criminal activities

Question 3: Now let us look at the uses of the word break. Match the word with its meanings below. Try to find at least three other ways in which to use the word.

(i) The storm broke – could not speak; was too sad to speak

(iv) Her voice broke and she cried – the beginning of daylight

(v) The heat wave broke – changing as he grows up

(vii) break a strike – gently told someone the bad news

(viii) (Find your own expression – Give its meaning here.)

(i) The storm broke – this kind of weather ended

(ii) daybreak – the beginning of daylight

(iv) Her voice broke and she cried – could not speak; was too sad to speak

(v) The heat wave broke – it began or burst into activity

(vii) break a strike – end it by making the workers submit

Question 1. Play detectives with each other. Find a person in your class (or some other acquaintance) to speak to. Find out the answers to the questions given below. Be careful to ask your questions in a polite and inoffensive way. Do not force the person to answer you. Then allow the person to ask you the same questions.

(ii) What newspapers or magazines does the person read?

(iii) How long has the person lived at the current address?

(iv) What does she/he do during the day, i.e. the daily routine?

(v) What do neighbors and friends say about the person?

(vi) Who are his/her visitors and what are his/her eating habits? (You can ask a few others about this.)

(vii) What do you think about the person?

Question 1. Who do you think Mr. Nath is? Write a paragraph or two about him.

Answer: I think Mr. Nath is just an ordinary man who is probably not eating well. He might be an introvert which is why he does not have friends and visitors. He might enjoy being alone than having company of many others.

He is very lean because he does not take meals properly. He is not even particular about the food he eats. He just needs two chapattis, dal and a vegetable. He consults Nishad’s mother, who is a doctor. This means that he is having some ailment. That can be another reason why he prefers to be alone.

He also has scars on his face, which make people think that he is some crook. But, the scars might be from some accident. The visitor who comes every Sunday might be a family member who comes to ensure that Mr. Nath is keeping well.

Question 2. What else do you think Nishad and Maya will find out about him? How? Will they ever be friends? Think about these questions and write a paragraph or two to continue the story.

Answer: I think Nishad and Maya will find out that Mr. Nath is a good person but an introvert. They might even get to know that Mr. Nath is working from home because he does not keep well. That is the reason he prefers being at home and not having visitors.

They might become friends later, especially Nishad can be a good friend to him because he was anyway in his favour from the beginning. Maya would have regretted to have doubted him to be a criminal.

Step I: Study the following questionnaire and discuss the points in small groups. 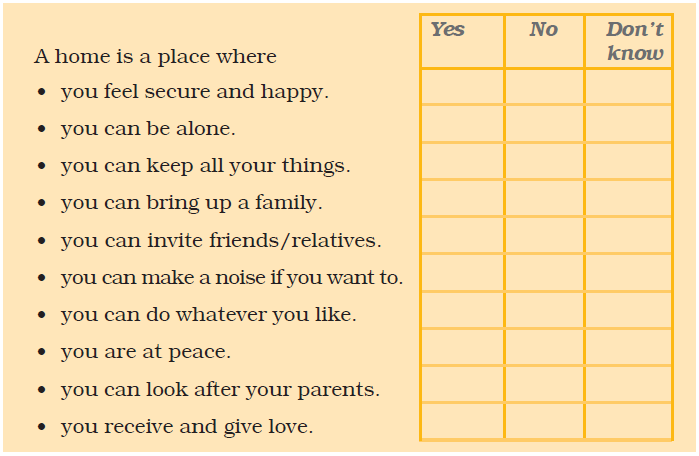 Step II: Collect information. Contact people in the school/your locality and put these questions to them.

Tick-mark (􀀳) their answers in the relevant column.

Step III: Analyze the results in the group by asking

• How many people think that a home is a place where you feel secure and happy?

• How many people think that a home isn’t a place where you feel secure and happy?

• How many people don’t know about it?

Step IV: Present a brief oral report on the result of your survey. Use phrases such as the following

• Most people think that…

• Hardly anyone thinks that…

• No one thinks that…

Students always find it difficult to frame answers in English as it contains prose and poems. Even though it is an easy scoring subject, reading the chapter frequently will help in improving the grammatical and linguistic skills among students. The faculty at BYJU’S have provided the chapter-wise solutions in both online and offline mode to help students learn the chapters without any difficulty. The simple language used in creating the solutions provides a strong grip on the subject which is important to score good grades in the final exam.

What does Unit 6 Expert Detectives in NCERT Solutions for Class 7 English depict about?

The Unit 6 Expert Detectives in NCERT Solutions for Class 7 English depicts a special dimension of the children’s world of curiosity and creativity. Siblings, Nishad and Maya are two detectives in the making with a talent for spotting evidence, more imaginary than incriminating, against a polite recluse with a health problem.

Describe Mr Nath as in Unit 6 of NCERT Solutions for Class 7 English.

Mr Nath as in Unit 6 of NCERT Solutions for Class 7 English has a gaunt appearance, burning scars on his face and looked strange. He doesn’t work anywhere, has no friends and visitors to his home.

Who gets meals for Mr Nath and what does he eat for an entire day as mentioned in Unit 6 of NCERT Solutions for Class 7 English?

Ramesh takes two meals up from the restaurant downstairs for Mr Nath every morning and evening and two cups of tea, one in the morning and one in the afternoon. Mr Nath is not particular about what he eats and consumes the same food every day. Mr Nath pays cash and tips Ramesh well. To know more about this instance, students can use the NCERT Solutions for Class 7 English Unit 6 PDF available at BYJU’S.