The chapter “The Invention of Vita-Wonk” talks about how Vita-Wonk was invented by a scientist by the name Mr. Wonka. At first, he had invented Wonka-Vite, which would reduce the age of a person and make him/her younger. It entails the series of events that happened before Mr. Wonka could finally invent Vita-Wonk which can make a person older.

You can also download these NCERT Solutions for Class 7 English in PDF format for free by clicking the link provided below and study anytime, anywhere! 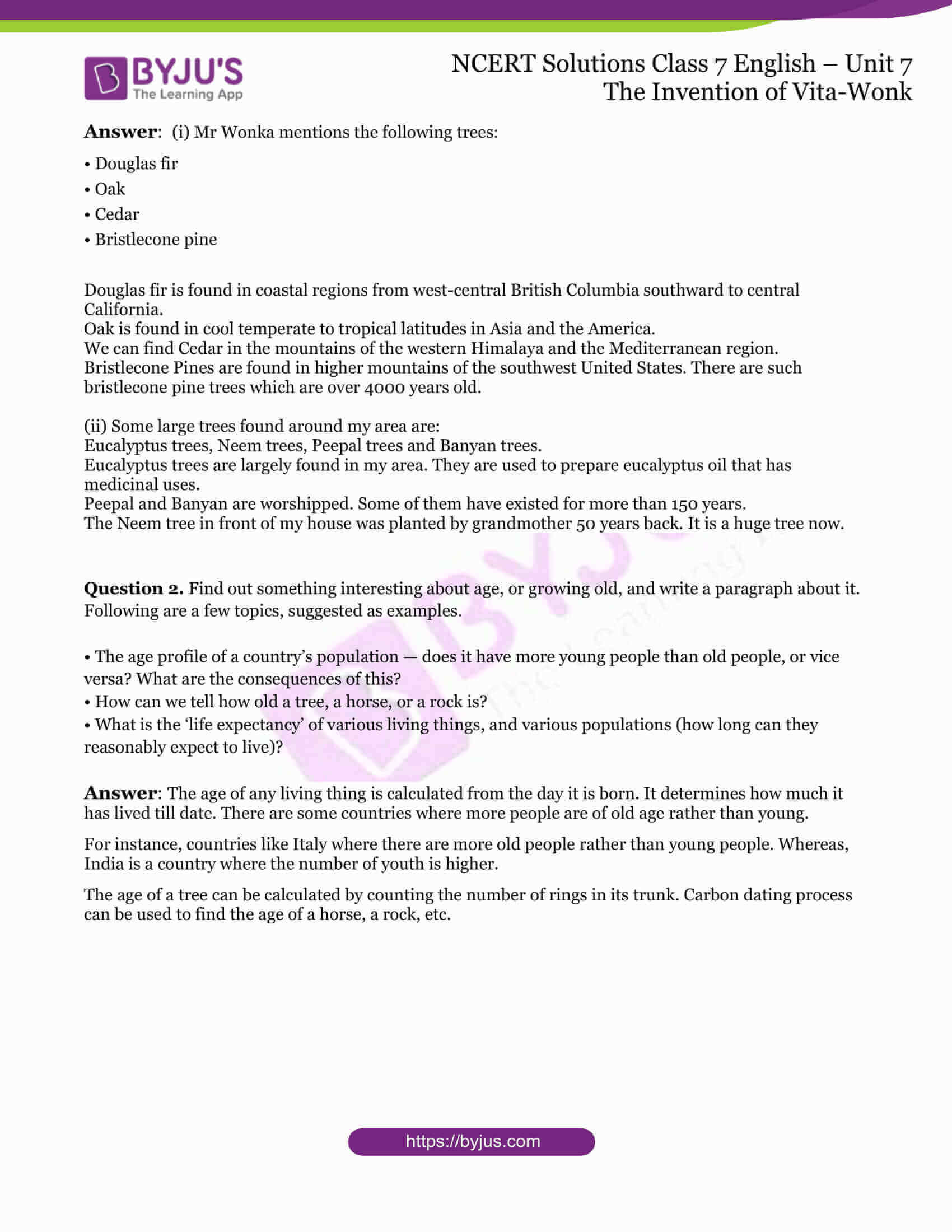 (i) Mr Willy Wonka is

Answer: (b) an inventor

Question 2. Can anyone’s age be a minus number? What does “minus 87” mean?

Answer: No, anyone’s age cannot be a minus number. It is calculated from the day we are born.

Minus 87 means that the person will have to wait for 87 years to take birth.

Question 3: Mr Wonka begins by asking himself two questions. What are they?

Answer: Mr Wonka begins by asking himself two questions. They are:

(i) What is the oldest living thing in the world?

(ii) What lives longer than anything else?

Question 1. (i) What trees does Mr Wonka mention? Which tree does he say lives the longest?

(ii) How long does this tree live? Where can you find it?

He says that the Bristlecone pine lives the longest.

(ii) This tree lives for over 4000 years. It can be found upon the slopes of Wheeler Peak in Nevada, U.S.A.

Question 2. How many of the oldest living things can you remember from Mr Wonka’s list? (Don’t look back at the story!) Do you think all these things really exist, or are some of them purely imaginary?

Answer: Here are the oldest living things that are enlisted by Mr Wonka:

I think most of them exist while some might be purely imaginary.

Question 3. Why does Mr Wonka collect items from the oldest things? Do you think this is the right way to begin his invention?

Answer: Mr Wonka collects items from the oldest things because he had to invent an item that can make people older.

I think researching on the oldest things is still a good idea as it can give him an insight into what might be the reason behind their long life. But, collecting little things from such species is not a great idea to begin his invention.

Question 4. What happens to the volunteer who swallows four drops of the new invention? What is the name of the invention?

Answer: The volunteer began to wrinkle and shrivel up all over. His hair started to drop off and his teeth started to fall out. He suddenly became a seventy-five year-old man!

The name of the invention was Vita-Wonk.

Question 1. What do you call these insects in your language?

Add to this list the names of some insects common in your area.

Answer: (Write the names of these insects as spoken in your language.)

Some other insects that are found commonly in our area are: bee, spider, lizard, etc.

Question 2: Fill in the blanks in the recipe given below with words from the box.

• Half a teaspoon red chilli powder

Wash and cut the vegetables; shred the palak. Put everything in a pressure cooker. Let the cooker whistle three times, then switch it off. Fry a few cumin seeds in oil and add to the palak–dal.

Question 3: A ‘family tree’ is a diagram that shows the relationship between the different members of a family. Fill in the family tree below with names, ages, and other details you think are relevant (you may even stick photographs, if you have them). Put your family trees up in the class. Question 1. Using Do for Emphasis

Charlie asks, “What did happen?”

This is a way of asking the question “What happened?” with emphasis.

Given below are a few emphatic utterances. Say them to your partner. Let your partner repeat your utterance without the emphasis. Your partner may also add something to show she/he disagrees with you.

YOU: I did study.

PARTNER: You studied? I don’t believe you. Look at your marks!

YOU: I did go there.

PARTNER: You went there? Then…

YOU: I do play games.

YOU: He does read his books.

YOU: You do say the most unbelievable things!

YOU: The earth does spin around.

YOU: We all do want you to come with us.

YOU: Who does know how to cook?

YOU: I do believe that man is a thief.

Answer: YOU: I did go there.

PARTNER: You went there? Then how was I unable to find you there?

YOU: I do play games.

PARTNER: You play games? Then why don’t you participate in them in the school?

YOU: He does read his books.

PARTNER: He reads his books? But he is never able to answer the questions correctly.

YOU: You do say the most unbelievable things!

PARTNER: I say the most unbelievable things? Why do you feel so?

YOU: The earth does spin around.

PARTNER: The earth spins around? How can you be so sure?

YOU: We all do want you to come with us.

PARTNER: You want me to come with you? Then why did not you guys call me earlier?

YOU: Who does know how to cook?

PARTNER: I do not. But can’t say about my elder sister. I think she knows how to cook.

YOU: I do believe that man is a thief.

PARTNER: You believe that man is a thief? What makes you think so?

Question 1. (i) Make a list of the trees Mr Wonka mentions. Where do these trees grow? Try to find out from an encyclopedia. Write a short paragraph about two or three of these trees.

(ii) Name some large trees commonly found in your area. Find out something about them (How old are they? Who planted them? Do birds eat their fruit?), and write two or three sentences about each one of them.

Oak is found in cool temperate to tropical latitudes in Asia and the America.

We can find Cedar in the mountains of the western Himalaya and the Mediterranean region.

Bristlecone Pines are found in higher mountains of the southwest United States. There are such bristlecone pine trees which are over 4000 years old.

(ii) Some large trees found around my area are:

Eucalyptus trees are largely found in my area. They are used to prepare eucalyptus oil that has medicinal uses.

Peepal and Banyan are worshipped. Some of them have existed for more than 150 years.

The Neem tree in front of my house was planted by grandmother 50 years back. It is a huge tree now.

Question 2. Find out something interesting about age, or growing old, and write a paragraph about it. Following are a few topics, suggested as examples.

• The age profile of a country’s population — does it have more young people than old people, or vice versa? What are the consequences of this?

• What is the ‘life expectancy’ of various living things, and various populations (how long can they reasonably expect to live)?

Answer: The age of any living thing is calculated from the day it is born. It determines how much it has lived till date. There are some countries where more people are of old age rather than young.

For instance, countries like Italy where there are more old people rather than young people. Whereas, India is a country where the number of youth is higher.

The age of a tree can be calculated by counting the number of rings in its trunk. Carbon dating process can be used to find the age of a horse, a rock, etc.

What invention was talked about in Unit 7 of NCERT Solutions for Class 7 English?

In Unit 7 of NCERT Solutions for Class 7 English, Mr Willy Wonka invented WonkaVite initially, which makes people younger. But this WonkaVite was too strong and some people started disappearing as their age became minus.

Which tree did Mr Wonka mention and how old was it as in Unit 7 of NCERT Solutions for Class 7 English?

Mr Wonka told Charlie about the tree, Bristlecone pine. It grew up on the slopes of Wheeler Peak in Nevada, U.S.A and they were over 4000 years old.

What was the newest invention of Mr Wonka and what did it do as mentioned in Unit 7 of NCERT Solutions for Class 7 English?

After lots of boiling, bubbling and mixing in the inventing room, Mr Wonka produced one tiny cupful of oily black liquid. He named it as Vita-Wonk and it made people get older.