The story, “This is Jody’s Fawn” is about a young child Jody’s emotional musing with the fawn whose mother was killed to save his father’s life. The story mainly highlights moral values such as justice and compassion, care and affection between human and animal life.

You can download these NCERT Solutions for Class 8 English in PDF format through the links provided below. 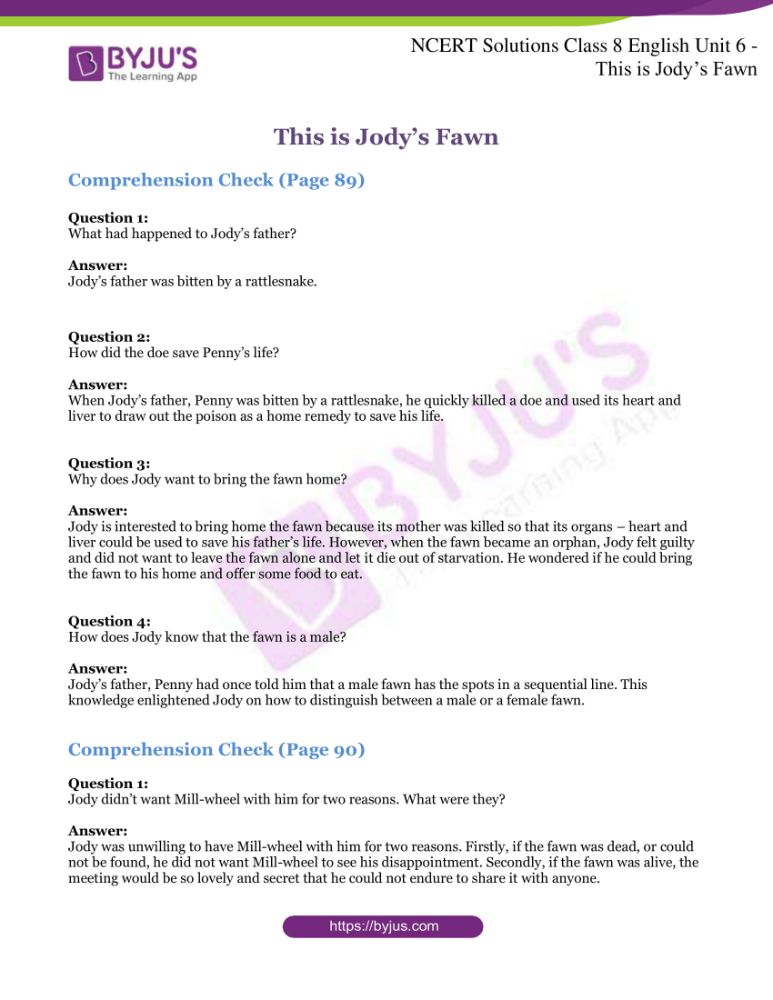 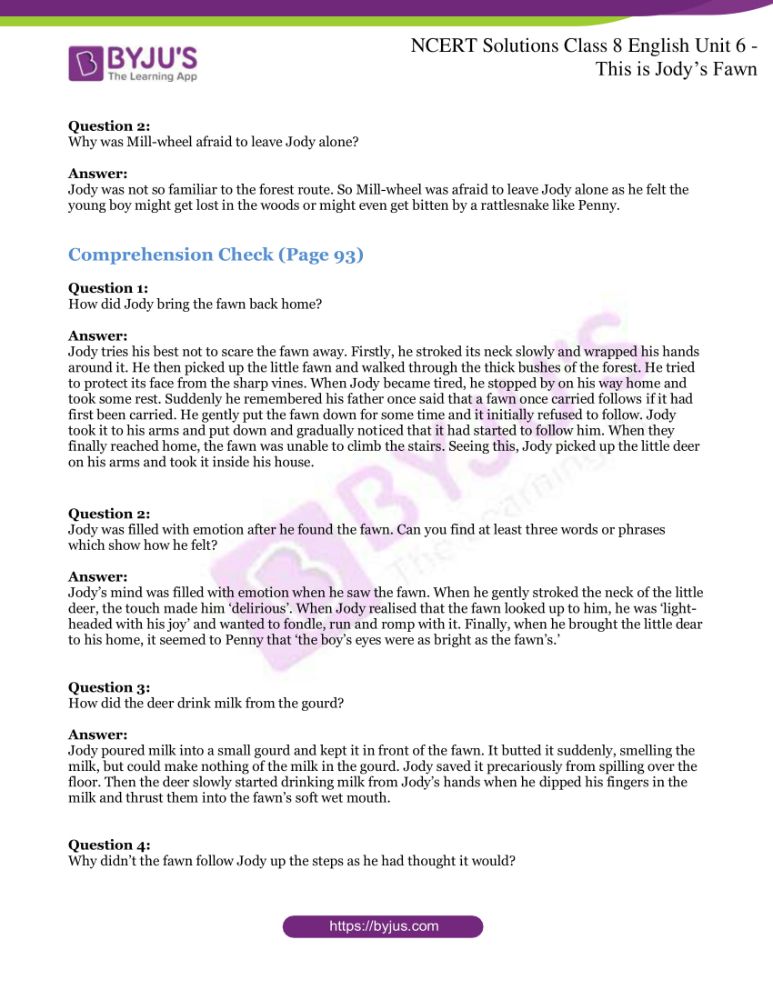 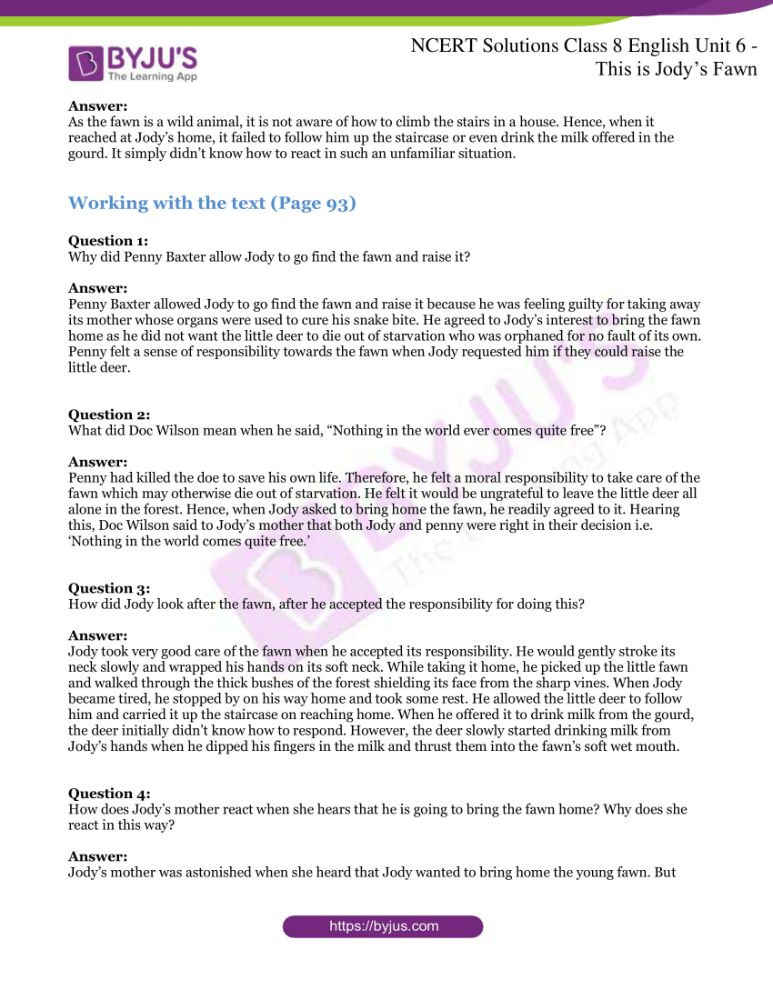 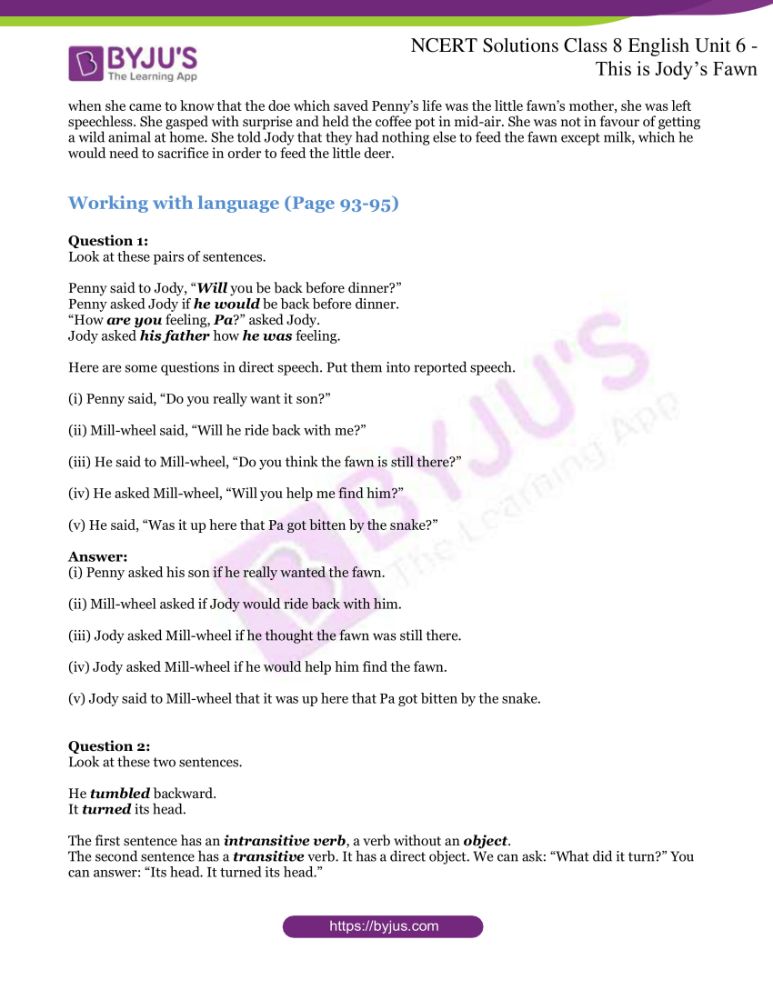 This is Jody’s Fawn

What had happened to Jody’s father?

Jody’s father was bitten by a rattlesnake.

How did the doe save Penny’s life?

When Jody’s father, Penny was bitten by a rattlesnake, he quickly killed a doe and used its heart and liver to draw out the poison as a home remedy to save his life.

Why does Jody want to bring the fawn home?

Jody is interested to bring home the fawn because its mother was killed so that its organs – heart and liver could be used to save his father’s life. However, when the fawn became an orphan, Jody felt guilty and did not want to leave the fawn alone and let it die out of starvation. He wondered if he could bring the fawn to his home and offer some food to eat.

How does Jody know that the fawn is a male?

Jody’s father, Penny had once told him that a male fawn has the spots in a sequential line. This knowledge enlightened Jody on how to distinguish between a male or a female fawn.

Jody didn’t want Mill-wheel with him for two reasons. What were they?

Why was Mill-wheel afraid to leave Jody alone?

Jody was not so familiar to the forest route. So Mill-wheel was afraid to leave Jody alone as he felt the young boy might get lost in the woods or might even get bitten by a rattlesnake like Penny.

How did Jody bring the fawn back home?

Jody tries his best not to scare the fawn away. Firstly, he stroked its neck slowly and wrapped his hands around it. He then picked up the little fawn and walked through the thick bushes of the forest. He tried to protect its face from the sharp vines. When Jody became tired, he stopped by on his way home and took some rest. Suddenly he remembered his father once said that a fawn once carried follows if it had first been carried. He gently put the fawn down for some time and it initially refused to follow. Jody took it to his arms and put down and gradually noticed that it had started to follow him. When they finally reached home, the fawn was unable to climb the stairs. Seeing this, Jody picked up the little deer on his arms and took it inside his house.

Jody was filled with emotion after he found the fawn. Can you find at least three words or phrases which show how he felt?

Jody’s mind was filled with emotion when he saw the fawn. When he gently stroked the neck of the little deer, the touch made him ‘delirious’. When Jody realised that the fawn looked up to him, he was ‘light-headed with his joy’ and wanted to fondle, run and romp with it. Finally, when he brought the little dear to his home, it seemed to Penny that ‘the boy’s eyes were as bright as the fawn’s.’

How did the deer drink milk from the gourd?

Jody poured milk into a small gourd and kept it in front of the fawn. It butted it suddenly, smelling the milk, but could make nothing of the milk in the gourd. Jody saved it precariously from spilling over the floor. Then the deer slowly started drinking milk from Jody’s hands when he dipped his fingers in the milk and thrust them into the fawn’s soft wet mouth.

Why didn’t the fawn follow Jody up the steps as he had thought it would?

As the fawn is a wild animal, it is not aware of how to climb the stairs in a house. Hence, when it reached at Jody’s home, it failed to follow him up the staircase or even drink the milk offered in the gourd. It simply didn’t know how to react in such an unfamiliar situation.

Working with the text (Page 93)

Why did Penny Baxter allow Jody to go find the fawn and raise it?

Penny Baxter allowed Jody to go find the fawn and raise it because he was feeling guilty for taking away its mother whose organs were used to cure his snake bite. He agreed to Jody’s interest to bring the fawn home as he did not want the little deer to die out of starvation who was orphaned for no fault of its own. Penny felt a sense of responsibility towards the fawn when Jody requested him if they could raise the little deer.

What did Doc Wilson mean when he said, “Nothing in the world ever comes quite free”?

Penny had killed the doe to save his own life. Therefore, he felt a moral responsibility to take care of the fawn which may otherwise die out of starvation. He felt it would be ungrateful to leave the little deer all alone in the forest. Hence, when Jody asked to bring home the fawn, he readily agreed to it. Hearing this, Doc Wilson said to Jody’s mother that both Jody and penny were right in their decision i.e. ‘Nothing in the world comes quite free.’

How did Jody look after the fawn, after he accepted the responsibility for doing this?

Jody took very good care of the fawn when he accepted its responsibility. He would gently stroke its neck slowly and wrapped his hands on its soft neck. While taking it home, he picked up the little fawn and walked through the thick bushes of the forest shielding its face from the sharp vines. When Jody became tired, he stopped by on his way home and took some rest. He allowed the little deer to follow him and carried it up the staircase on reaching home. When he offered it to drink milk from the gourd, the deer initially didn’t know how to respond. However, the deer slowly started drinking milk from Jody’s hands when he dipped his fingers in the milk and thrust them into the fawn’s soft wet mouth.

How does Jody’s mother react when she hears that he is going to bring the fawn home? Why does she react in this way?

Jody’s mother was astonished when she heard that Jody wanted to bring home the young fawn. But when she came to know that the doe which saved Penny’s life was the little fawn’s mother, she was left speechless. She gasped with surprise and held the coffee pot in mid-air. She was not in favour of getting a wild animal at home. She told Jody that they had nothing else to feed the fawn except milk, which he would need to sacrifice in order to feed the little deer.

Look at these pairs of sentences.

Penny said to Jody, “Will you be back before dinner?”

Penny asked Jody if he would be back before dinner.

“How are you feeling, Pa?” asked Jody.

Jody asked his father how he was feeling.

Here are some questions in direct speech. Put them into reported speech.

(ii) Mill-wheel said, “Will he ride back with me?”

(iii) He said to Mill-wheel, “Do you think the fawn is still there?”

(iv) He asked Mill-wheel, “Will you help me find him?”

(i) Penny asked his son if he really wanted the fawn.

(ii) Mill-wheel asked if Jody would ride back with him.

(iii) Jody asked Mill-wheel if he thought the fawn was still there.

(iv) Jody asked Mill-wheel if he would help him find the fawn.

(v) Jody said to Mill-wheel that it was up here that Pa got bitten by the snake.

Look at these two sentences.

It turned its head.

The first sentence has an intransitive verb, a verb without an object.

The second sentence has a transitive verb. It has a direct object. We can ask: “What did it turn?” You can answer: “Its head. It turned its head.”

Say whether the verb in each sentence below transitive or intransitive. Ask yourself a ‘what’ question about the verb, as in the example above. (For some verbs, the object is a person, so ask the question ‘who’ instead of ‘what’).

(i) Jody then went to the kitchen.

(ii) The fawn wobbled after him.

(iii) You found him.

(v) He dipped his fingers in the milk.

(vi) It bleated frantically and butted him.

(vii) The fawn sucked his fingers.

(viii) He lowered his fingers slowly into the milk.

(x) He held his fingers below the level of the milk.

(xi) The fawn followed him.

(xii) He walked all day.

(xiii) He stroked its sides.

(xiv) The fawn lifted its nose.

(i) Jody then went to the kitchen. – Intransitive

(ii) The fawn wobbled after him. – Intransitive

(iii) You found him. – Transitive

(iv) He picked it up. – Transitive

(v) He dipped his fingers in the milk. – Transitive

(vi) It bleated frantically and butted him. – Intransitive, Transitive

(viii) He lowered his fingers slowly into the milk. – Transitive

(x) He held his fingers below the level of the milk. – Transitive

(xi) The fawn followed him. – Transitive

(xii) He walked all day. – Intransitive

(xiii) He stroked its sides. – Transitive

The words would appear in the following sequential order when arranged properly:

Some idioms and phrasal verbs connected to these words are listed below:

Close: a close shave, a close thing, a close call.

Light: a light heart, bring to light, a guiding light.

Make: make a last-ditch effort, make a pass, make up your mind.

Parted: part with, parting of the ways, part and parcel.

Pick: pick out, pick at, take your pick.