The story, “A Visit to Cambridge” is a travelogue that highlights the exchange of views between two ‘differently abled’ people. In this prose, through a tour to Cambridge, both discuss their perspectives about their lives on a wheelchair and the reaction of other people towards disabled individuals.

You can download these NCERT Solutions for Class 8 English in PDF format through the links provided below. 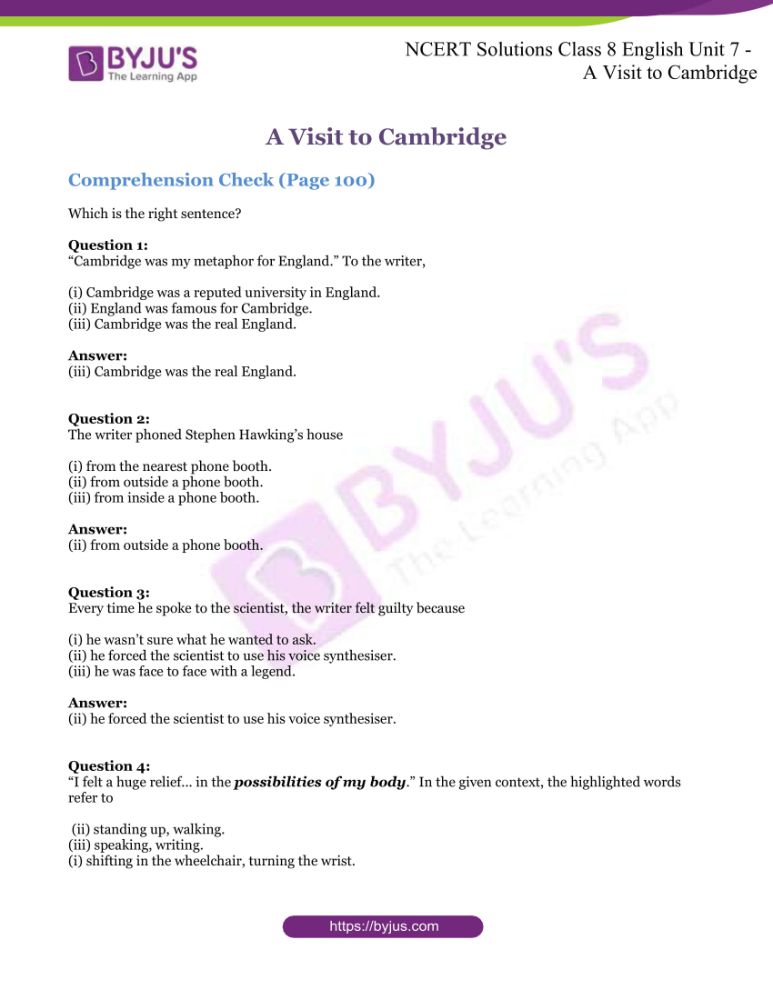 A Visit to Cambridge

Which is the right sentence?

“Cambridge was my metaphor for England.” To the writer,

(i) Cambridge was a reputed university in England.

(ii) England was famous for Cambridge.

(iii) Cambridge was the real England.

(iii) Cambridge was the real England.

(i) from the nearest phone booth.

(ii) from outside a phone booth.

(iii) from inside a phone booth.

(ii) from outside a phone booth.

Every time he spoke to the scientist, the writer felt guilty because

(i) he wasn’t sure what he wanted to ask.

(ii) he forced the scientist to use his voice synthesiser.

(iii) he was face to face with a legend.

(ii) he forced the scientist to use his voice synthesiser.

“I felt a huge relief… in the possibilities of my body.” In the given context, the highlighted words refer to

(i) shifting in the wheelchair, turning the wrist.

(i) shifting in the wheelchair, turning the wrist.

(i) Did the prospect of meeting Stephen Hawking make the writer nervous? If so, why?

(ii) Did he at the same time feel very excited? If so, why?

(i) The writer was nervous at the prospect of meeting Stephen Hawking because Hawking was a very renowned and brilliant astrophysicist despite being paralysed and differently abled. He had authored one of the biggest best-sellers ever – A Brief History of Time. Besides, he was a worthy successor to Sir Isaac Newton and succeeded to his Chair at the Cambridge University.

(ii) Yes, the author – Firdaus Kanga was super excited to meet Stephen Hawking because he wasn’t expecting that he would be getting an opportunity to have a face-to-face conversation with such a great personality. He wondered that although Hawking was paralysed and differently abled, he had achieved greater heights and was considered a worthy successor to Sir Isaac Newton and succeeded to his Chair at the Cambridge University. This made Firdaus aware of the innumerous possibilities before him and he could reach out further than he ever thought he could.

Guess the first question put to the scientist by the writer.

The first question that the writer might have asked the scientist was if he felt relieved and brave for accomplishing such great achievements in life despite being disabled.

Stephen Hawking said, “I’ve had no choice.” Does the writer think there was a choice? What was it?

Although Stephen Hawking stated that he had no choice, but to remain confined to the wheelchair. The writer felt that living creatively with the reality of his disintegrating body was a choice for him. Firdaus strongly felt that Hawking could have easily sulked and surrendered to life, rather he chose to accomplish new heights despite being disabled.

“I could feel his anguish.” What could be the anguish?

Stephen Hawking was such a brilliant scientist who brought to light various laws of science. His mind was always receptive to new ideas and he always wanted to express the different thoughts in his mind. He was dependent on a voice synthesizer for expressing his thoughts, without any emotions. The writer could understand Hawking’s anguish for his helplessness and felt that there were innumerous things which he wanted to express, but was unable to do so. His entire existence was dependent on a computer for expressing his thoughts and emotions. He was full of anguish for this reason.

What endeared the scientist to the writer so that he said he was looking at one of the most beautiful men in the world?

The writer asked Stephen Hawking if he found it annoying for causing disturbance in his work. Without any second thought, Hawking quickly with a yes. But he suddenly gave a one-way smile and this endeared the scientist to the writer. The writer instantly felt that he was indeed looking at one of the most beautiful men in the world, who although is disabled physically, but has a beautiful soul, not a body, which is nothing but just an accessory.

The most beautiful sentence in the description of ‘the beautiful’ man is – “Before you, like a lantern whose walls are worn so thin you glimpse only the light inside, is the incandescence of a man.”

The above sentence describes Hawking’s personality as his inner beauty or glow that’s so beautiful and vibrant which renders his physical inability nothing but just an accessory.

(ii) What is housed within the thin walls?

(iii) What general conclusion does the writer draw from this comparison?

(i) If ‘the lantern’ is the man, its ‘walls’ would refer to the structure of the human body.

(ii) The light of life is housed within the thin walls of the external structure.

(iii) The author implies that inside the human body there is an eternal soul which is incandescence of a man, the outer physical structure is nothing more than just an accessory.

What is the scientist’s message for the disabled?

Stephen Hawking emphasized on the fact that every person irrespective of his capacity or disability should try to focus on enhancing or working towards on what they are good at. He further added that disabled should not make unnecessary foolish efforts to imitate normal people. They should make the best utilization of the available resources and be thankful to God for granting them the ability to achieve or accomplish any impossible task.

Why does the writer refer to the guitar incident? Which idea does it support?

When Stephen Hawking mentioned to the author that Olympics for the disabled was a complete waste of time, this reminded the author about the years that he spent trying to play the Spanish guitar which was considerable larger than him. One night, he loosened the guitar strings without any regrets. The author could understand Hawking’s message for disabled which mentions that one should try to concentrate on what they are good at, rather than trying to compare themselves or imitate the normal people.

The writer expresses his great gratitude to Stephen Hawking. What is the gratitude for?

Stephen Hawking inspired the author to an extent that he was grateful to the scientist. He saw how Hawking was brave enough to achieve such big things in life despite his disability. The scientist was indeed an embodiment of his courageous self. This optimistic aspect of Hawking inspired the author so much that he felt a deep sense of gratitude for the scientist and showed him a new way of leading life without complaining of the disability all the time.

Complete the following sentences taking their appropriate parts from both the boxes below.

(i) There was his assistant on the line …

(ii) You get fed up with people asking you to be brave, …

(iv) You look at his eyes which can speak, …

(i) There was his assistant on the line and I told him I had come in a wheelchair from India.

(ii) You get fed up with people asking you to be brave, as if you have a courage account on which you are too lazy to draw a cheque.

(iii) There he was, tapping at a little switch in his hand trying to find the words on his computer.

(iv) You look at his eyes which can speak, and they are saying something huge and urgent – it is hard to tell what.

(v) It doesn’t do much good to know that there are people smiling with admiration to see you breathing still.

Fill in the blanks in the sentences below using the appropriate forms of the words given in the following box.

(iv) His other problems ____________ into insignificance beside this unforeseen mishap.

(i) I met a traveller from an antique land.

(ii) I need special guidance in mathematics. I can’t count the number of times I have failed in the subject.

(iv) His other problems paled into insignificance beside this unforeseen mishap.

(v) The meeting was chaired by the youngest member of the board.

(vi) Some people say ‘yours truly’ when they informally refer to themselves.

(vii) I wish it had been a drawn match. We would have been spared the noise of celebrations, at least.

Look at the following words.

Can you create a meaningful phrase using both these words?

(It is simple. Add -ing to the verb and use it before the noun. Put an article at the beginning.)

Now make six such phrases using the words given in the box.

Use all or both in the blanks. Tell your partner why you chose one or the other.

(i) He has two brothers. Both are lawyers.

(ii) More than ten persons called. All of them wanted to see you.

(iii) They all cheered the team.

(iv) Both her parents are teachers.

Complete each sentence using the right form of the adjective given in brackets.

(i) My friend has one of the fastest cars on the road.

(ii) This is the most interesting story I have ever read.

(iii) What you are doing now is easier than what you did yesterday.

(iv) Ramesh and his wife are both short.

(v) He arrived late as usual. Even the chief guest came earlier than he did.