This unit has a story “A Short Monsoon Diary” which consists of a few excerpts from Ruskin Bond’s diary in which he explains the silent miracles of nature, the monsoon season and life’s little joys and regrets by exploring the transition that the flora and fauna experience during this season.

Class 8 students can check the English textbook NCERT Solutions, which have been attempted, as per the latest CBSE English curriculum. Besides, students can also explore the other subjects of NCERT Solutions of Class 8 in PDF format here and have a fulfilling learning experience. 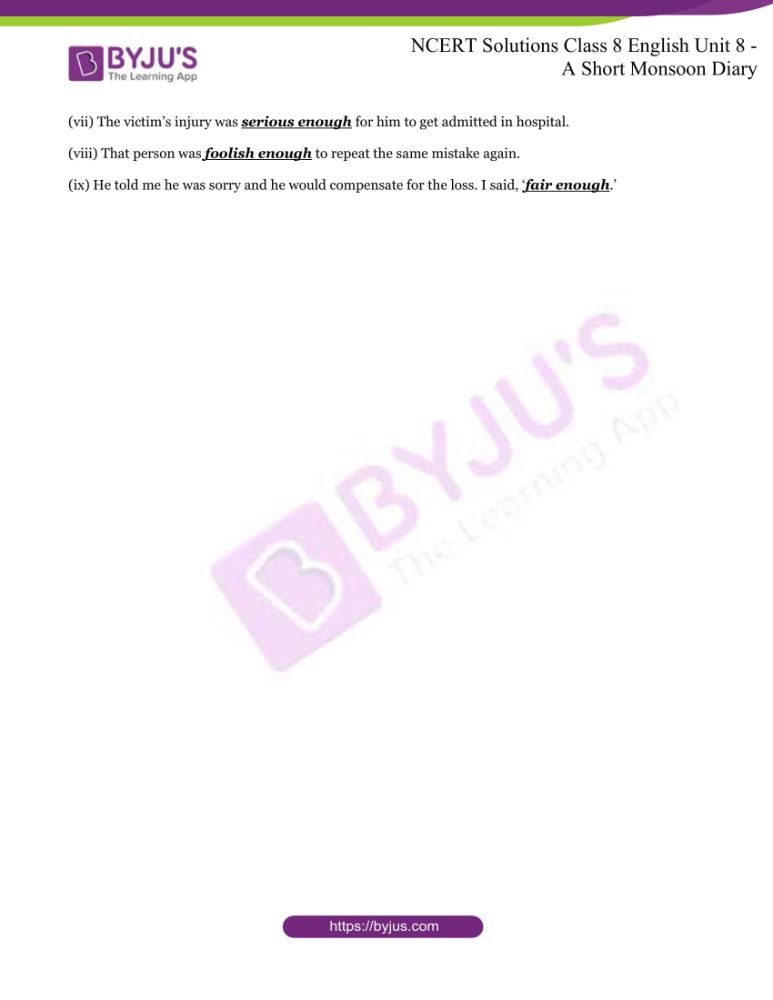 Why is the author not able to see Bijju?

What are the two ways in which the hills appear to change when the mist comes up?

When the mist comes up, it covers and conceals the hills completely like a thick white blanket. Besides, the trees that usually ring with bird songs tend to appear deathly and silent as the birds do not make any chirping sound and react as though it were midnight.

When does the monsoon season begin and when does it end? How do you prepare to face the monsoon?

In India, the monsoon starts setting in from May-end every year. According to the author’s monsoon diaries, the monsoon mist first appears in Mussoorie on June 24 or 25 and continues until August 31 or mid-September. We usually carry umbrellas and raincoats to face the monsoon and protect ourselves from getting wet and falling sick unnecessarily.

Which hill-station does the author describe in this diary entry?

According to the diary entry, the author describes the beautiful and mesmerizing hill station named Mussoorie.

For how many days does it rain without stopping? What does the author do on these days?

It rained continuously for eight to nine days. As the weather was damp and soggy outside and he could not go outside, he kept pacing his room and looked out of the window at a few bobbing umbrellas.

Where do the snakes and rodents take shelter? Why?

Snakes and rodents come out of their holes and burrows and they take shelter in roofs, attics and godowns to save themselves from getting wet in the rain water.

What did the author receive in the mail?

The author received a cheque in the mail.

Look carefully at the diary entries for June 24-25, August 2 and March 23. Now write down the changes that happen as the rains progress from June to March.

According to Ruskin Bond’s diary entries, June 24 is the first day of monsoon mist. The hills are concealed by a thick white blanket of mist and filled with utmost silence. From June 25, the real monsoon starts setting in and the entire Nature including human beings, birds, animals and trees welcome it. The first cobra lily rears its head from the ferns.

People get habituated with the monsoon season by August 2. Rain starts drumming on the corrugated tin roofs of their houses. Although there is no storm or thunder, there is just the steady swish of a tropical downpour. Snakes and rodents start coming out of their holes and burrows and they take shelter in roofs, attics and godowns to save themselves from getting wet in the rain water.

March 23 signals the end of winter. The blackest cloud slowly occupies the sky that is followed by a hailstorm. This clears the sky completely and soon a rainbow starts forming. This is one of the best and most splendid sights that anyone could visualize or experience about the beauty of Nature.

Why did the grandmother ask the children not to kill the Chuchundar?

The grandmother asked the children not to kill the Chuchundar because this animal is considered to be lucky and bring in good fortune and money.

What signs do we find in Nature which show that the monsoons are about to end?

The hillsides in Mussoorie become lush green as late-monsoon flowers begin to appear — wild balsam, dahlias, begonias and ground orchids. The seeds of the cobra lily slowly start turning red that signify the rains are coming to an end and the monsoon season is almost over.

(i) Bijju is not seen but his voice is heard because the dense mist conceals the hills and the surroundings.

(ii) The writer describes the hill station and valley as a paradise that might have been.

(iii) The leopard was successful in attacking one of Bijju’s cows but had to flee when Bijju’s mother arrived and screamed imprecations.

(iv) The minivets are easily noticed because of their bright colours.

(v) It looks like a fashion display on the slopes when ground orchids, mauve lady’s slipper and the white butterfly orchids bloom.

(vi) During the monsoon season, snakes and rodents are found in roofs and attics because they have been flooded out of their holes and burrows.

‘Although tin roofs are given to springing unaccountable leaks, there is a feeling of being untouched by, and yet in touch with, the rain.’

(i) Why has the writer used the word, ‘springing’?

(ii) How is the writer untouched by the rain?

(iii) How is the writer in touch with the rain at the same time?

(i)The word ‘springing’ refers to moving suddenly at once. The author uses this word to indicate how the tin roofs are prone to development of sudden unexpected leaking.

(ii) The author is left physically untouched by rain because he is safe inside his room and the tin roof stops the rain from leaking inside.

(iii) The writer is in touch with the rain at the same time because he can see the rain from inside his room and feel it as it has been drumming on the corrugated tin roof of his house.

Mention a few things that can happen when there is endless rain for days together.

When it rains continuously for days together, everything around becomes damp and soggy. It becomes difficult for anyone to go out in the rain. The hillsides become lush green as late-monsoon flowers begin to appear i.e. the wild balsam, dahlias, begonias and ground orchids. The holes and burrows of snakes and rodents become flooded and they take shelter in roofs, attics and godowns.

What is the significance of cobra lily in relation to the monsoon season, its beginning and end?

When the monsoon season starts setting in, the first cobra lily appears from the ferns. However, when the seeds of the cobra lily slowly start turning red that signify monsoon is coming to an end.

Here are some words that are associated with the monsoon. Add as many words as you can to this list. Can you find words for these in your languages?

Here are some more words that are associated with the monsoon:

Note: For the second part of the question, students are advised to attempt it themselves.

Look at the sentences below.

(i) Bijju wandered into the garden in the evening.

(ii) The trees were ringing with birdsong.

The verb wandered tells us what Bijju did that evening. But the verb was ringing tells us what was happening continually at same time in the past (the birds were chirping in the trees).

Put the verbs in the brackets into their proper forms. The first one is done for you.

We got out of the school bus. The bell was ringing and everyone was rushing to class.

(ii) The traffic (stop). Some people (sit) on the road and they (shout) slogans.

(iv) She (see) a film. She (narrate) it to her friends who (listen) carefully.

(v) We (go) to the exhibition. Some people (buy) clothes while others (play) games.

(vi) The class (is) quiet. Some children (read) books and the rest (draw).

(ii) The traffic stopped. Some people were sitting on the road and they were shouting slogans.

(iii) I wore my raincoat. It was raining and people were getting wet.

(iv) She saw a film. She was narrating it to her friends who were listening carefully.

(v) We went to the exhibition. Some people were buying clothes while others were playing games.

(vi) The class was quiet. Some children was reading books and the rest were drawing.

Here are some words from the lesson which describe different kinds of sounds.

(i) Match these words with their correct meanings.

(a) to fall in small drops

(b) to make a sound by hitting a surface repeatedly

(c) to move quickly through the air, making a soft sound

(d) harsh sound made by birds

(e) ringing sound (of a bell or breaking glass, etc.)

(ii) Now fill in the blanks using the correct form of the words given above.

(b) to make a sound by hitting a surface repeatedly – drum

(c) to move quickly through the air, making a soft sound – swish

(ii) (a) Ramesh drummed on his desk in impatience.

(b) Rain water dripped from the umbrella all over the carpet.

(c) The pony swished its tail.

(d) The tinkling of breaking glass woke me up.

(e) The cawing of the raven disturbed the child’s sleep.

And sure enough, I received a cheque in the mail.

Complete each sentence below by using appropriate phrase from the ones given below.

(i) I saw thick black clouds in the sky. And sure enough it soon started raining heavily.

(ii) The blue umbrella was big enough for the brother and sister.

(iii) The butterflies are colourful enough to get noticed.

(iv) The lady was brave enough to chase the leopard.

(v) The boy was anxious enough to call out to his sister.

(vi) The man was kind enough to offer help.

(vii) The victim’s injury was serious enough for him to get admitted in hospital.

(viii) That person was foolish enough to repeat the same mistake again.

(ix) He told me he was sorry and he would compensate for the loss. I said, ‘fair enough.’