NCERT Solutions for Class 8 English Unit 8 Poem – On the Grasshopper and Cricket is available for an easy download, here at BYJU’S. Presenting you well-structured NCERT Solutions, which are solved by our panel of expert teachers. You can check the NCERT Solutions given below.

You can download the NCERT Solutions link as provided below and access the textbook solutions, which are solved according to the latest CBSE English syllabus. Meanwhile, you can also download the different chapters of NCERT Solutions for Class 8 English in PDF format here and score well in this subject during the exams. 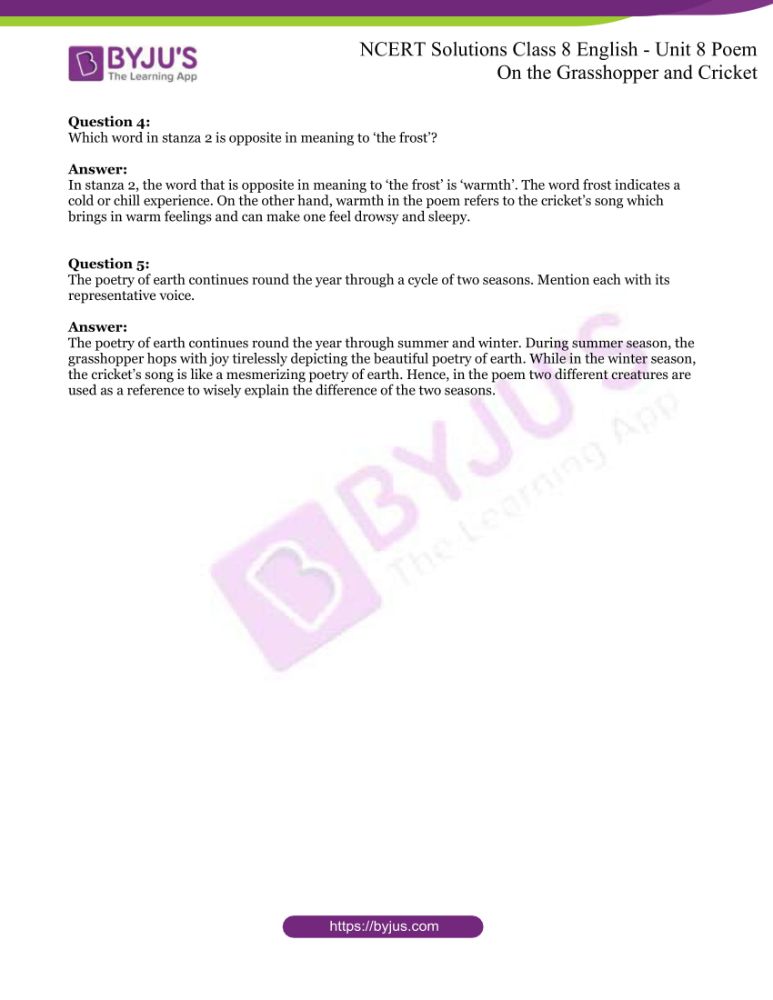 On the Grasshopper and Cricket

Discuss with your partner the following definition of a poem.

A poem is made of words arranged in a beautiful order. These words, when read aloud with feeling, have a music and meaning of their own.

A poem is an artistic piece of speech or a few lines which is expressed by the poet like a song with rhythms and metaphors. There is a musical element in the arrangement of words in a poem. The beautifully arranged words in a poem enhance the essence and meaning of the poem. The rhythmic expressions in it carry several ideas and reflect the imaginative power of the poet. An interesting and musical poem has a lasting impact in the minds of the readers as it gives an opportunity to appreciate the beauty of the lines in the poem.

‘The poetry of earth’ is not made of words. What is it made of, as suggested in the poem?

The poetry of earth is not just made of words, rather it is composed of the rhythmic songs produced by nature’s beautiful creatures. The musical element of nature never ceases to mesmerize us with its ever changing seasons. Summer and winter are considered to be the most difficult seasons for many creatures such as the grasshopper and cricket. These seasons bring it a lot of joy, sorrow and excitement to such creatures. During summer, the grasshopper excitedly hops around tirelessly in joy and when he is tired, he rests beneath a pleasant weed. On the other hand, a cricket sings with a shrill voice during the dark and lonely nights of the winter season.

Find in the poem lines that match the following.

(i) The grasshopper’s happiness never comes to an end.

(ii) The cricket’s song has a warmth that never decreases.

(i) In summer luxury — he has never done

(ii) The cricket’s song, in warmth increasing ever

Which word in stanza 2 is opposite in meaning to ‘the frost’?

In stanza 2, the word that is opposite in meaning to ‘the frost’ is ‘warmth’. The word frost indicates a cold or chill experience. On the other hand, warmth in the poem refers to the cricket’s song which brings in warm feelings and can make one feel drowsy and sleepy.

The poetry of earth continues round the year through a cycle of two seasons. Mention each with its representative voice.

The poetry of earth continues round the year through summer and winter. During summer season, the grasshopper hops with joy tirelessly depicting the beautiful poetry of earth. While in the winter season, the cricket’s song is like a mesmerizing poetry of earth. Hence, in the poem two different creatures are used as a reference to wisely explain the difference of the two seasons.