NCERT Solutions for Class 9 Civics Chapter 4 provides students about a deep knowledge of how an institution works. In a democracy, the rulers have to follow some rules and procedures. They have to work with and within institutions. This is what you have learned from this chapter. Now, in the exercise, you will find questions related to this topic. We have provided the NCERT Solutions for Class 9 Civics Chapter 4 Working of Institutions. These solutions contain the answers in a precise and easy to understand language. By going through these answers, you will also recall the topics of this chapter once again. 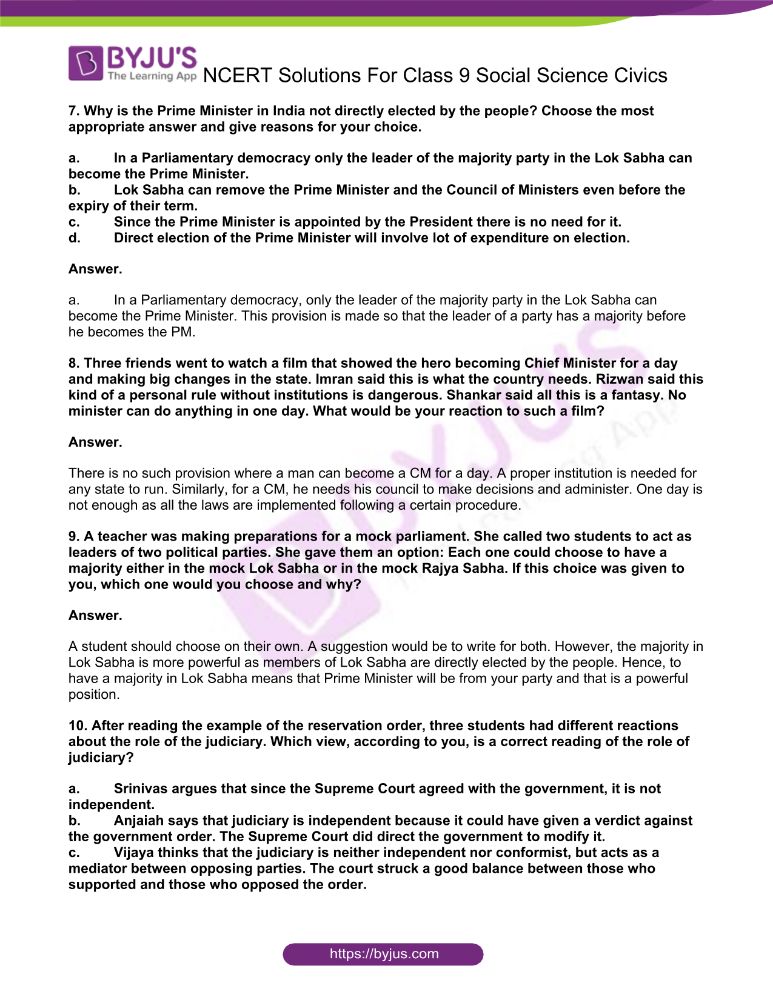 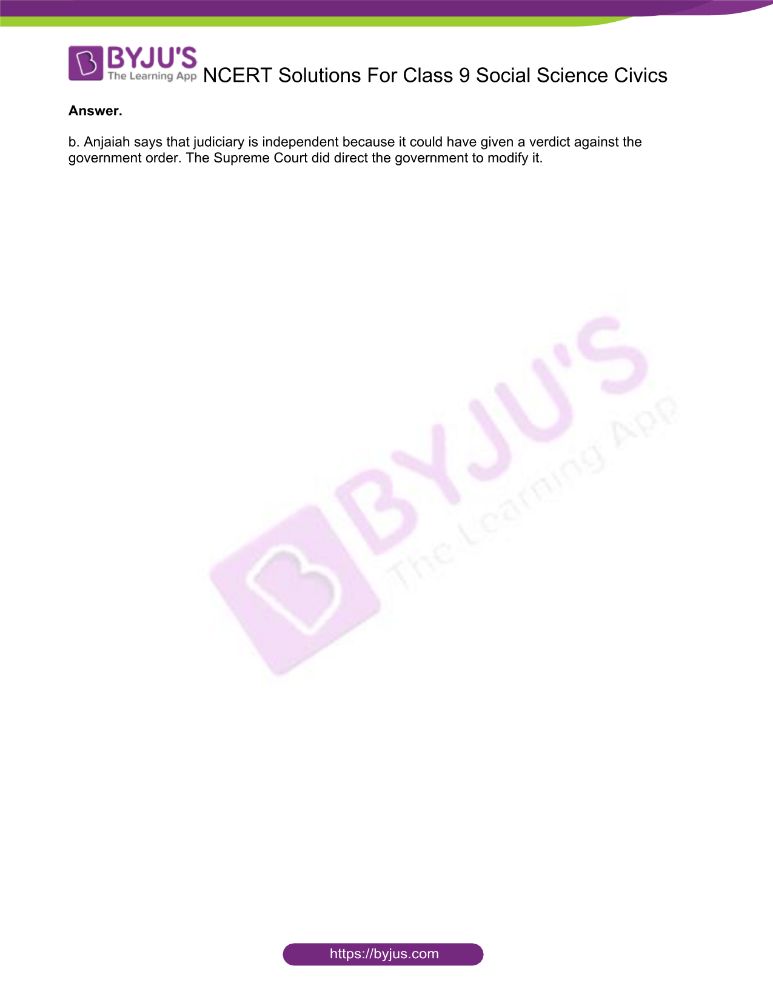 The solutions for Chapter 4 of Democratic Politics-I are given below. Students should also check NCERT Solutions for Class 9 for other subjects.

1. If you are elected as the President of India which of the following decision can you take on your own?

c. Ask for reconsideration of a bill passed by both the Houses.

2. Who among the following is a part of the political executive?

3. Which of the following statements about the judiciary is false?

a. Every law passed by the Parliament needs approval of the Supreme Court

4. Which of the following institutions can make changes to an existing law of the country?

6. Of all the institutions that we have studied in this chapter, name the one that exercises the powers on each of the following matters.

7. Why is the Prime Minister in India not directly elected by the people? Choose the most appropriate answer and give reasons for your choice.

8. Three friends went to watch a film that showed the hero becoming Chief Minister for a day and making big changes in the state. Imran said this is what the country needs. Rizwan said this kind of a personal rule without institutions is dangerous. Shankar said all this is a fantasy. No minister can do anything in one day. What would be your reaction to such a film?

There is no such provision where a man can become a CM for a day. A proper institution is needed for any state to run. Similarly, as a CM, he needs his council to make decisions and administer. One day is not enough to pass laws, as all laws are implemented following a certain procedure.

9. A teacher was making preparations for a mock parliament. She called two students to act as leaders of two political parties. She gave them an option: Each one could choose to have a majority either in the mock Lok Sabha or in the mock Rajya Sabha. If this choice was given to you, which one would you choose and why?

Students should choose on their own. A suggestion would be to write for both. However, the majority in Lok Sabha is more powerful, as members of Lok Sabha are directly elected by the people. Hence, to have a majority in the Lok Sabha means that the Prime Minister will be from your party and that is a powerful position.

10. After reading the example of the reservation order, three students had different reactions about the role of the judiciary. Which view, according to you, is a correct reading of the role of judiciary?

b. Anjaiah says that the judiciary is independent is because it could have given a verdict against the government order. The Supreme Court did direct the government to modify it.

Chapter 4 of NCERT Social Science Civics textbook – ‘Democratic Politics-I’ explains how the government works with and within the institutions. It is fascinating to know how laws are made and who is behind their framing. Indian Parliament is the institution responsible for legislating and executing the acts. In this chapter, Class 9 students will read about these institutions and how important they are.

Apart from this Chapter, the full set of NCERT Solutions for Class 9 Social Science is given in the linked article.

Give me a summary of exercises present in NCERT Solutions for Class 9 Political Science Chapter 4.

The concepts present in NCERT Solutions for Class 9 Political Science Chapter 4 are
How Is A Major Policy Decision Taken?
A Government Order
The Decision-Makers
Need for Political Institutions
Parliament
Why do We Need a Parliament?
Two Houses of Parliament
Political Executive
Political and Permanent Executive
Prime Minister and Council of Ministers
Power of the Prime Minister
President
The Judiciary


Is it necessary to learn all the questions present in NCERT Solutions for Class 9 Political Science Chapter 4?

Yes, if you want to score good in your CBSE exams then have to practice all the questions and formulae related to it. The solutions present in BYJU’S website are very accurate and clear. Students can start practicing NCERT Solutions for Class 9 Political Science Chapter 4 to score higher marks. These solutions can be helpful not only for the exam preparation but also in solving homework and assignments.

No not at all, if you practice regularly NCERT Solutions for Class 9 Political Science Chapter 4 is not much difficult to understand. The main aim of these solutions is to provide a fundamental aspect of Political Science, which in turn, helps the students to understand every concept clearly.