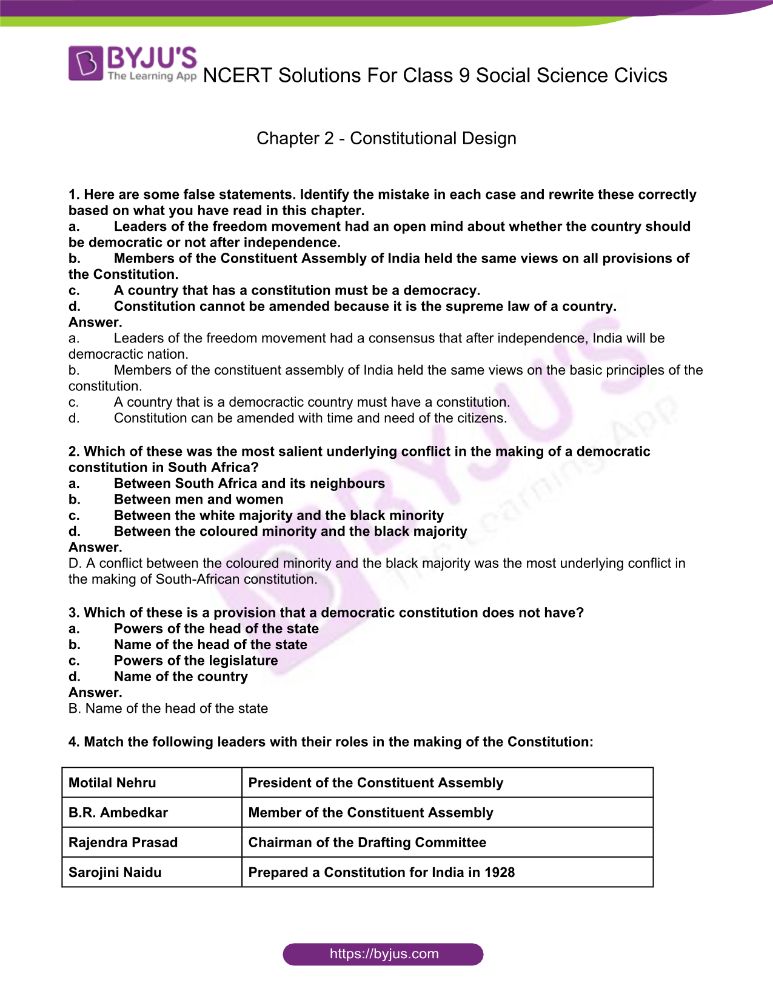 The solutions for Chapter 2 of Democratic Politics-I are given below. Students should also check NCERT Solutions Class 9 for other subjects.

1. Here are some false statements. Identify the mistake in each case and rewrite these correctly based on what you have read in this chapter.

2. Which of these was the most salient underlying conflict in the making of a democratic constitution in South Africa?

D. A conflict between the coloured minority and the black majority was the most underlying conflict in the making of the South-African constitution.

3. Which of these is a provision that a democratic constitution does not have?

B. Name of the head of the state

4. Match the following leaders with their roles in the making of the Constitution:

5. Read again the extracts from Nehru’s speech ‘Tryst with Destiny’ and answer the following:

6. Here are some of the guiding values of the Constitution and its meaning. Rewrite them by matching them correctly.

7. How did your school celebrate Constitution Day on November 26th? Prepare a brief report.

Students should write their report on their own if they have celebrated Constitution Day on November 26th.

8. Here are different opinions about what made India a democracy. How much importance would you give to each of these factors?

9. Read the following extract from a conduct book for ‘married women’, published in 1912. ‘God has made the female species delicate and fragile both physically and emotionally, pitiably incapable of self-defence. They are destined thus by God to remain in male protection – of father, husband and son – all their lives. Women should, therefore, not despair, but feel obliged that they can dedicate themselves to the service of men’. Do you think the values expressed in this para reflected the values underlying our constitution? Or does this go against the constitutional values?

The values expressed in the above-mentioned para do not reflect the values underlying our Constitution. Our constitution gives fundamental rights to each of its citizens regardless of gender, caste, sex, place of birth and religion. Women are given equal rights as men in our constitution through various Acts.

10. Read the following statements about a constitution. Give reasons why each of these is true or not true.

2. Why Do We Need A Constitution?

3. Making Of The Indian Constitution

4. Guiding Values Of The Indian Constitution

What is the constitution according to NCERT Solutions for Class 9 Civics Chapter 2?

India’s Constitution is the supreme law of India. It defines the Government’s fundamental political values, policies, processes, powers, rights, and duties. It conveys constitutional supremacy & not parliamentary supremacy because it is not established by the Parliament but by a constituent assembly and adopted by its citizens, with a declaration in its preamble. The practice is an essential task to learn and score well in subjects. Hence the solutions are designed by BYJU’S experts to boost confidence among students in understanding the concepts covered in this chapter.

Why should I opt NCERT Solutions for Class 9 Civics Chapter 2?

The concepts present in NCERT Solutions for Class 9 Civics Chapter 2 are explained in simple language, which makes it possible even for a student not proficient in Political Science to understand the subject better. Solutions are prepared by a set of experts at BYJU’S with the aim of helping students boost their CBSE exam preparation.

Is NCERT Solutions for Class 9 Civics Chapter 2 difficult to learn?

No, if you practice regularly with NCERT Solutions for Class 9 Civics Chapter 2 you can achieve your goal by scoring high in the CBSE exams. These solutions are formulated by a set of subject experts at BYJU’S. Students can score good marks in the exams by solving all the questions and cross-checking the answers with the NCERT Solutions for Class 9 Civics Chapter 2.