Cork cambium is the tissue seen in several vascular plants as a portion of the epidermis. Found between the cork and the primary phloem, it is one of the several layers of the bark. Cork cambium is the lateral meristem that is accountable for secondary growth substituting the epidermis in the roots and stems. Secondary growth refers to an increase in the girth of a plant which is initiated by cell divisions in the lateral meristems.

It can be located in woody and several herbaceous dicots, some monocots, and gymnosperms. It is one of the meristems of plants – a series of tissues comprising embryonic disk cells from where the plant tends to grow. The cork cambium is involved in the production of cork – a tough protective matter.

The cork cambium or pericambium or Phellogen initially forms from the parenchyma cells in the cortex and at times in the primary phloem. It produces new dermal tissues which gradually replaces the epidermis which is formed by the protoderm. 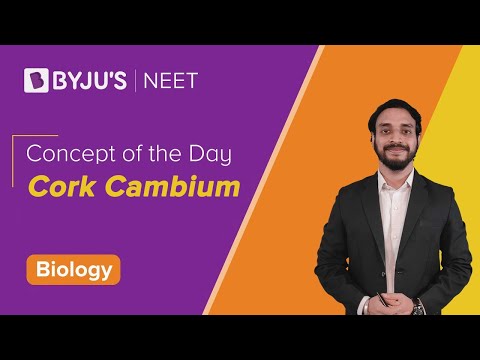 The secondary growth maintains two fundamental functions of the vascular tissue – support and conduction. There are two types of dermal tissues in vascular plants – periderms and epidermis. The cortex and the epidermis form at the time of primary growth. These are replaced by the periderm in the plants which exhibit secondary growth.

The cortex hence expands as a result of the expansion of the diameter of the stem because of the activity of the vascular cambium. As there is no cell division in the cortex, the expansion gradually causes the cortex to break apart and fall off its stem. Then the subsequent cork cambia emerges from the secondary phloem to the inside. The initial cork cambium in the roots forms post modifications in the pericycle and the endodermis. The endodermis is not required anymore as water and minerals are not absorbed anymore.

The pericycle does not give rise to the branch roots however, instead it widens as they are propelled towards the exterior. The first cork cambium emerges from the outer layers of this enlarged pericycle forming a layer of the periderm. The outer layer of the roots – endodermis, epidermis and the cortex get stretched and gradually ruptures to peel off which leaves the periderms as the outer covering.

This was a synopsis on cork cambium. Visit BYJU’S for more on NEET.