What is adaptive radiation?

Adaptive radiation is the evolutionary diversification of many related species from a common ancestral species in a relatively short period. Osborne (1902) coined the term “Adaptive Radiation”. He stated that each large and isolated region, with sufficiently varied topography, soil, vegetation, climate, will lead to organisms with diverse characteristics. Darwin had called it “Divergence”, i.e. the tendency in an organism descended from the same ancestor to diverge in character as they undergo changes. Adaptive radiation plays a significant role in macroevolution. Adaptive radiation gives rise to species diversity in a geographical area.

Adaptive radiation is more common during major environmental changes and physical disturbances. It also helps an organism to successfully spread into other environments. Furthermore, it leads to speciation. Moreover, it also leads to phenotypically dissimilar, but related species. Major causes of adaptive radiation are: 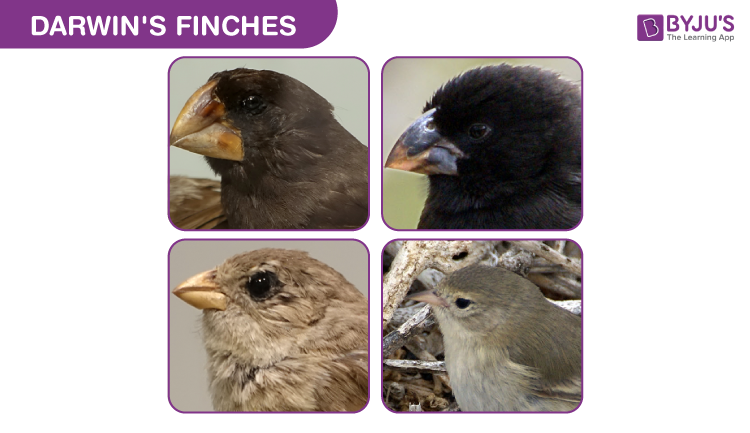 Darwin’s Finches
Galapagos Islands are a chain of islands resulting from volcanic action. These islands were never connected to mainland South America. Darwin’s finches descended from small sparrow-like birds that once inhabited the mainland and migrated to Galapagos islands.

3. Cichlids of African Great Lakes: There are more than 2000 species of cichlids fishes found in these lakes, which are a remarkable example of adaptive radiation. They have varied morphological characteristics and play various roles like predators, herbivores, scavengers. Their head shape and dentition varies according to their dietary habits.

4. Adaptive radiation in reptiles: Adaptive radiation in reptiles occurred between the Permian and Cretaceous eras. They ruled over the land in the Mesozoic era, which is also referred to as the “Age of Reptiles”. The initial success of the reptiles is due to the evolutionary shift from aquatic to completely terrestrial development, i.e. amniotic eggs of reptiles. A variety of reptiles blossomed from Cotylosauria (stem reptile).

5. Adaptive radiation in Hawaiian honeycreepers: These are a group of related birds found in the Hawaiian Islands. Honeycreepers diversified quickly and occupied the available adaptive zones. There were more than 50 species found, of which only 17 species remain today. Many species went extinct after the discovery and subsequent colonisation of the island. Their beaks are specialized to satisfy their dietary requirements. Some are curved to extract nectar out of tubular flowers, whereas others are short and thick to rip away the bark of trees in search of insects.

6. Adaptive radiation in Hawaiian silverswords: There are 28 species of closely related plants found in the Hawaiian Islands. There were diverse environmental conditions present, such as cool, arid mountains, shady moist forests, wet bogs, dry woodlands, exposed lava flows, which were unoccupied when the ancestor of silverswords reached the Islands. Silverswords rapidly diversified in structure and physiology to occupy the main adaptive zones. The diversity of their leaves is a good illustration of adaptive radiation.

This was all about adaptive radiation. Learn other important concepts related to NEET, only at BYJU’S.