Almost 80% of our sensory responses from the environment is said to be perceived through the eyes. This processing of visual perception holds one-quarter of one’s brain. The process of visual perception is a highly complicated process. It comprises three main sections –

Structure of the Eye

Although the eye is a small structure, it is the most complex organ of the human body. The eye is placed in a bony socket in the skull which extends only a small part outside that is visible. The eye wall comprises three layers – innermost, outermost and the middle layer.

Here is the retina, it can be seen located directly behind the eyeball. The capillary found in the middle choroid nourishes the retina when available. It is the light sensitive part of the eye because it has many photoreceptors that are of two kinds (cones and rods). Rods are accountable for white and black visions and functional to see at night. Cones, on the other hand, account for different colour visions.

It is the choroid comprising black pigmented cells, richly supplied with blood capillaries. This layer forms the ciliary body and iris.

It is also referred to as the sclera. It is a whitish tough layer comprising tissues which are connected together. This sclera functions to primarily protect and maintain the shape of the eyeball. 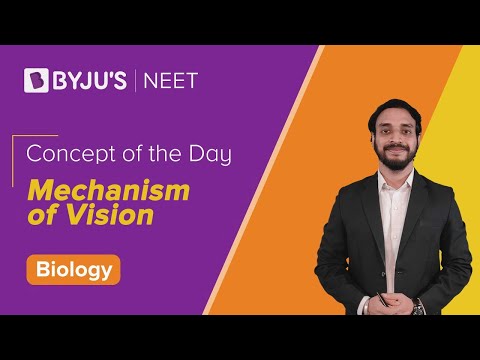 Different Parts of the Eye

The eye comprises several structures, take a look at the table for details of each structure.

The physiological events which take place are as follows –

All the parts of the eye function together thus enabling us to see. At first light enters through the clear front layer of the eye, the cornea. Due to its structure (dome-shaped), it bends light to aid the eye in focusing.

Some part of this light passes the eye through the pupil opening. The coloured part of the eye, the iris, regulates how much light enters the pupil.

Light enters through the lens then when the lens functions with the cornea to focus light aptly on the retina. When light passes the retina, special cells referred to as photoreceptors convert light into electrical signals. These signals pass from the retina to the brain through the optic nerve. The brain then turns signals into images which we see.

What are the components that make the visual pathway?

What is the physiology of sight?

While looking at an object, light rays from that object are refracted and brought to a focus upon the retina. The image falls on the retina in an inverted position and the energy in the visual spectrum is converted into electrical impulses by rods and cones of the retina. Impulses from rods and cones reach the cerebral cortex through the optic nerve and the sensation of vision is produced in the cerebral cortex.

What are the functions of rods and cones?