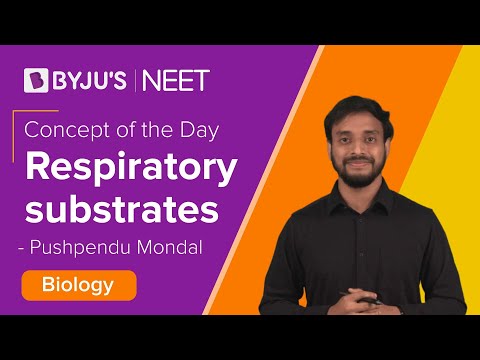 The energy yield of different substrates are as follows –

Substrates that are disintegrated in respiration to release energy could be proteins or fats, or carbohydrates. Proteins are made use of as respiratory substrates only in the unavailability of carbohydrates and fats.

As respiratory substrates fats are used after their hydrolysis to the fatty acids and glycerol by lipase and hence its conversion to hexose sugars. Proteins act as substrates after its disintegration to amino acids by the proteolytic enzymes.

When it comes to carbohydrates, apart from simple sugars such as fructose and glucose, complex disaccharides specifically sucrose and polysaccharides such as starch and hemicelluloses are made use of as respiratory substrates.

At the time of respiration, complex substrates are disintegrated into simple ones and carbon dioxide is finally released forming water. Some energy is liberated when respiratory substrates are oxidized. Some sections of this energy are held as ATP and some are lost in the form of heat. The energy trapped in molecules of ATP can be used in different ways. All the complex carbohydrates at first are converted into hexose before it enters into the process of respiration.

It is calculated by dividing the volume of carbon dioxide that is released by the volume of oxygen that is taken at the time of respiration of a specific substrate.

For the complete respiration of glucose, it takes six oxygen molecules, which gives rise to the production of 6 molecules of carbon dioxide. The yield is an RQ of 1.

Lipids have a great proportion of the carbon-hydrogen bond compared to carbohydrates, that is why it produces more ATP in respiration. It requires relatively more oxygen to disintegrate it down and liberate comparatively lesser carbon dioxide. This leads to respiratory quotients of less than one in the case of lipids. The structure of amino acids results in RQs somewhat between lipids and carbohydrates.

This was an overview of respiratory substrates. For more related concepts important for NEET, visit BYJU’S.