When the white light is passed through a medium, they get split according to their respective frequencies and wavelengths. The white light spectrum starts from 7.5 x 1014 Hz for the violet colour to 4 x 1014 Hz for the red colour. The interaction of electromagnetic radiation with matter causes the molecules and atoms present in a matter to absorb energy and reach a higher energy state. This higher energy state is unstable, and hence they have to emit energy in the form of radiations to return to their original states. This process generates emission spectra and absorption spectra.

Let us know more about spectra and various types, along with their applications.

The instrument used to separate the radiations of different wavelengths is known as Spectroscope or Spectrograph. A spectrometer is a scientific device that aids to separate and measure spectral components of a physical phenomenon. Branch of science that deals with the study of the spectrum are known as spectroscopy.

A spectrograph features a prism or diffraction grating that is used to disperse light. The emerging light after the dispersion from the prism is examined using a photographic film.

Spectra is classified into two types:

Click the below video for understanding the definition and the types of spectrum: 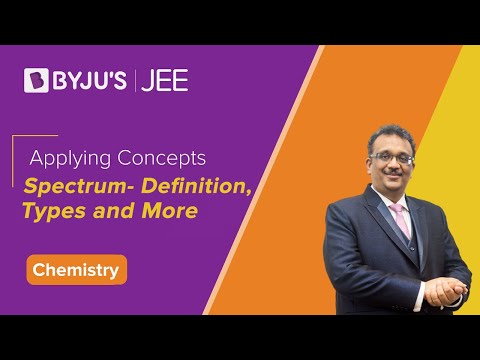 Based on the source, the emission spectrum is classified into two types:

This spectrum is constituted by the frequencies of light transmitted with dark bands when the electrons absorb energy in the ground state to reach higher energy states. This type of spectrum is produced when atoms absorb energy. Let’s know how absorption spectra are formed.

The dark line pattern is seen exactly in the same place where coloured lines are seen in the emission spectrum. The spectrum thus obtained is known as the absorption spectrum.

Emission spectra can emit all the colours in an electromagnetic spectrum, while the absorption spectrum can have a few colours missing due to the redirection of absorbed photons. The wavelengths of light absorbed help figure out the number of substances in the sample.

The pattern of absorption lines, emission lines, and the continuous spectrum is shown below.

Read more about the emission spectrum.

What is Absorption Spectroscopy?

Absorption spectroscopy is a spectroscopic technique that is used for measuring the absorption of radiation as it interacts with the sample. The radiation could be a function of either frequency or wavelength.

In remote sensing, absorption spectroscopy is used for analytical purposes such as measuring the presence of hazardous elements without bringing the sample in contact with the instrument.

Stay tuned with BYJU’S for more such interesting articles on atomic spectra, emission spectra and electromagnetic waves in detail.

What are emission spectrum used for?

The emission spectrum is used to understand the composition of the chemicals.

Which type of spectrum comprises dark lines or gaps in the spectrum?

This spectrum of radiation emitted by electrons in the excited atoms or molecules is known as emission spectrum.

What is meant by absorption spectroscopy?

Absorption spectroscopy is a spectroscopic technique that is used for measuring the absorption of radiation as it interacts with the sample.

It is the branch of science that deals with the study of the spectrum.
Test your Knowledge on Absorption Spectrum
Q5

Visit BYJU'S for all Physics related queries and study materials