What is an Electric Dipole?

A couple of opposite charges separated by a particular distance is known as an electric dipole. In space, the direction of electric dipoles is always from -q (negative charge) to q (positive charge). The centre of the dipole is the midpoint of q and –q.

1) Which among the following statements best defines a dipole?

Explanation: An electric dipole normally states it’s a combination of two opposite and equal charges separated by a small distance. It can be anywhere, not necessarily at the origin.

2) What will be the total potential at a point P due to a dipole?

a) Sum of potentials of the individual charges

b) Difference of potentials of the individual charges

c) Multiplication of potentials of the individual charges

Explanation: The total potential at the point P due to the dipole will be the difference between the potentials of the individual charges.

3) 3 C and -3 C are two equal charges separated by a distance of 4 cm, then calculate the dipole moment of a dipole.

Explanation: The dipole moment of charge 3 C and distance 4 cm will be,

4) Which of the following phenomenon is experienced by the dipoles in an electric field?

Explanation: In any pure electric field, dipoles will experience polarisation. In accordance with the electric field applied, it is the procedure of alignment of dipole moments.

a) Intensity of electric field

b) Patterns of polarisation

d) Strength of the dipole in the field

6) On which among the following factors does dipole moment depend?

b) Length and charge of a dipole

c) Dielectric constant and charge of the medium

7) The nature of electric flux from the cube surface, if an electric dipole is placed inside a cube will be?

a) The electric flux will be releasing out of the surface

b) The electric flux will be coming into the surface

c) There will be no flux at all

Explanation: The sum of total charges in a dipole is always 0 because an electric dipole contains two-point charges where the number of charges is the same, but their polarities differ. And also, the total charge inside a surface is related to the flux from a closed surface. So, there will be no flux coming in or releasing towards the surface as the total charge inside the cube is zero.

8) If a force F is acting on a point charge that is kept on the axis of an electric dipole, and if the distance of the point charge is tripled from the dipole, what will be the amount of force?

Explanation: If a point charge kept on the axis of a dipole has a suitably large distance than the separation between the charges of a dipole, then it can be shown that E α 1/r3, where E = electric field at a distance r from the dipole. If the distance becomes 3r, then the electric field intensity will be reduced by a factor of 33=27 times. Therefore, the force (F) will now become F27.

9) Which among the following is the dimensional formula of dipole moment?

10) _____will act on an electric dipole if it is placed in a uniform electric field.

b) Both torque and force

c) No force but torque

Explanation: As we know that a dipole is the grouping of two unlike and equal charges kept at a certain distance. Both the charges will experience the same but opposite forces if it is placed in a uniform electric field, and as a result, there will be zero net force on the dipole. But there will be a net torque acting on the dipole because equal and opposite forces act on two different points.

1) What is an electric dipole?

2) What is the SI unit of dipole moment?

3) Give an example of an electric dipole. 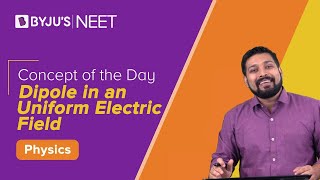