An atom is made up of nuclei and electrons, bounded by the electromagnetic force. The mass of electrons is small when compared to that of nuclei and negatively charged. Nuclei consist of neutrons and protons. The protons consist of point-like particles known as “up” and “down” quarks. 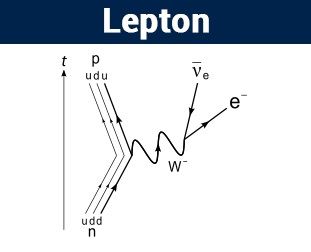 A lepton is an elementary half-integer spin particle that does not get involved in strong interactions. There are six leptons, three of them have an electrical charge and three do not. They appear like point-like particles that don’t have internal structure. The electron is the best-known lepton.

These are the charged electrons but have more mass. The other three leptons are three types of neutrinos (v). They have very little mass, no electrical charge, and very hard to find.

The quarks exist only in composite particles with other quarks, while leptons are individual particles.

There are three well-known leptons that are electrically charged: Electron (e), Tauon (τ), and Muon (μ).

While the three leptons that are electrically neutral are the neutrinos (v).

There is also an associated antiparticle for each lepton, having the same mass but charged oppositely. The electron is directly tied to almost all the atoms of its chemical properties. It is very stable and the smallest charged particle we know. The positron which is the electron’s antiparticle is similar in mass with a positive charge.

Test your knowledge on Lepton
Q5