Momentum can be defined as the product of the mass and velocity of an object. This is derived from Newtonian mechanics. Momentum has magnitude and direction and therefore, it is a vector quantity.

The following formula is used for calculating the momentum of an object:

The SI unit of momentum is kg.m/s and its dimensions are [MLT-1].

What is Photon Momentum?

The below diagram is an illustration of the Compton Effect and the formula is: 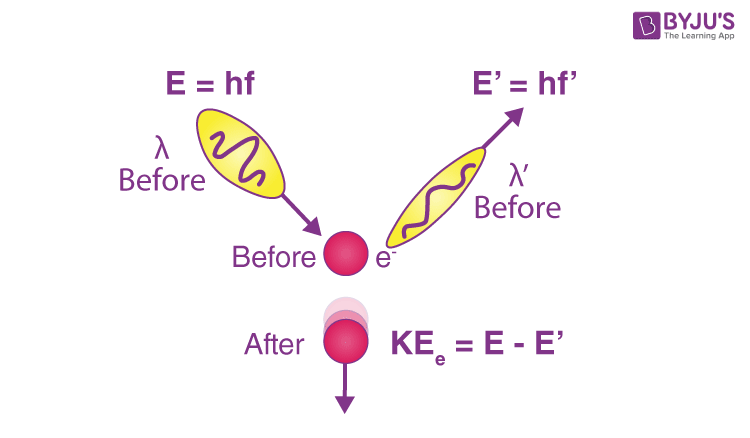 When a photon is scattered by an electron, this effect is known as the Compton effect. During this effect, momentum, as well as energy, is conserved. When this occurs, the scattered photon will have less energy and momentum. This study helped Compton prove that the photons have momentum.

The wavelength of the light is given as 4×10-7 m. Determine the momentum of the photon of light.

Substituting the values in the formula,

The below video is an explanation of a quantum mechanical model: In the electromagnetic spectrum, which photon carries the most energy and momentum?

In the electromagnetic spectrum, gamma rays carry the most energy and momentum.

Why is quantum mechanics important?

Quantum mechanics is important because it helps in understanding the electronic structure of a chemical compound at the theoretical level. Also, factors such as thermodynamics, kinetics, and other mechanisms are studied.

What is the difference between Compton effect and photoelectric effect?

How much energy is in a photon?

What is a photon equal to?

Stay tuned with BYJU’S to learn more about other concepts related to Physics.