We all have seen a line of ants walking over our walls and floors, wondering about their arrival and departure. Hailing from the largest and definitely the oldest insect colony, ants are social insects which belong to the order Hymenoptera and class Arthropoda. With over 10,000 species, a typical ant colony may contain as much as 20 million individuals. The scientific name for ant is Formicidae. 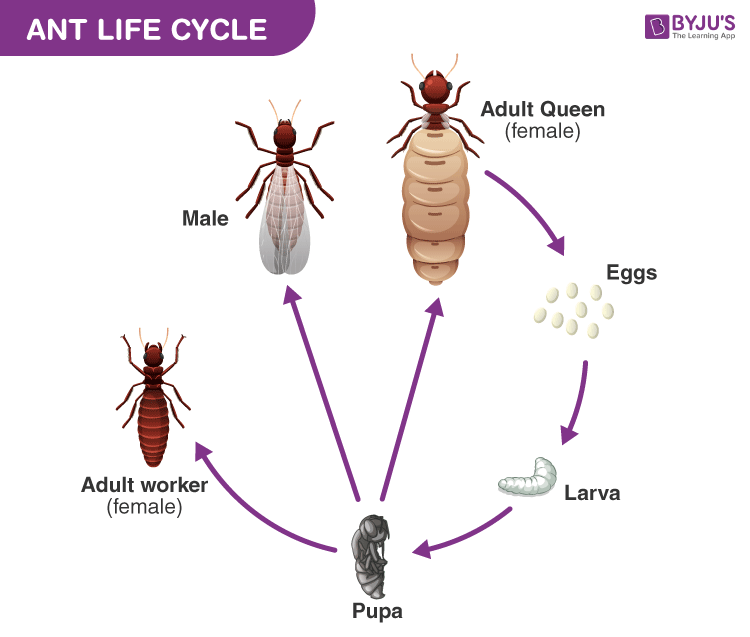 The ants are found in tropical forests during the summer season with the remaining insect community. Ants are divided into three groups, namely – queens, worker and male. The life cycle of an ant varies from weeks to months, depending upon the environmental conditions.

Ants are social insects and have a social system where tasks are divided among the queen and worker ants. Queen ants are responsible for reproduction and dispersal while worker ants search and accumulate food, brood and maintain the nest. When we talk about reproduction in ants, it is different from the reproduction of mammals. Ants cannot mate with each other like other insects. Only the queen ant can mate; the rest of the female ants are sterile. Male ants, also known as drone ants, are fertile and ready to mate with the queen ant.

Ant undergoes several physical developments during their life span. An ant goes through a complete metamorphosis, which means ants have four stages – egg, larva, pupa and the adult in the course of its life cycle. The stages are as follows:

The tiny eggs hatch into larvae without eyes and legs. The larvae then undergo a series of moulting where hair starts growing. The hair is shaped like a hooked, enabling worker ants to carry larvae ants as they do not have eyes and legs at this stage. The larvae ant moults multiple times over this stage, primarily depending on adult worker ants for food.

The ant larvae transform into a pupa stage over the course of several moults. Physical features like eyes, legs and wings may start to appear. In the pupa stage, the ant has antennae and legs that are folded against their body.

The adult ant hatches out of the eggs after 6 to 10 weeks for development in the pupa stage. When the adult hatches, it is fully grown and developed as their exoskeleton prevents ants from growing larger. The adult ant is soft and lightly colored and gets darker, and the exterior part of the ant gets darker and rigid after a few hours.

Although ants are known for their miniature size, it is interesting to note that ants are capable of lifting 20 times more than their own weight. Unlike other insects that demise in weeks or months, queen ant of Pogonomyrmex Owyheei can live up to 30 years. Ants also portray great cooperation as their gathering can be as large as 360 million ants.

To learn more about ants and other insects, register by BYJU’S Biology.

How long do ants live?

The lifespan of ants varies depending on the kind of ant. A male worker ant dies after mating while worker ants survive for several months. The queen ant lives for decades if the environmental conditions are favourable.

Do ants have wings?

Male ants and young queen ants fly to mate. After mating, the female ant sheds her wings to begin a new life.

Ants are omnivores in nature as they feed on everything – leaf, fruit, plants. Sugar acts as an energy source for ants, so when they find sugar, they gather other ants and take the sugar back to their nest for other ants.