Animals belonging to class Mammalia are referred to as mammals. Mammals are one of the most evolved species in the animal kingdom categorized under vertebrata.

They exhibit advanced characteristics which set them apart from all other animals. They are characterized by the presence of mammary glands through which they feed their younger ones.

They are distributed worldwide and have adapted well to their surroundings – from oceans, deserts and polar regions to rainforests and rivers etc.

Let us have a detailed look at the characteristics and classifications of the animals belonging to the class Mammalia.

Following are a list of distinct characteristics of mammals that separates them from other classes: 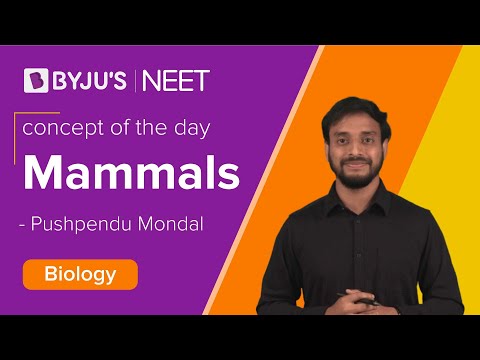 Mammalia has the largest class in the animal kingdom. Based on their reproduction, they are classified into three subclasses:

Mammals under this subclass give birth to young ones. The young ones are developed inside the mother and derive nutrition through the placenta from the mother. Furthermore, it consists of 19 orders, few of which are:

Mammals belonging to this sub-class give birth to immature young ones, hence they stay in their mother’s pouch until they mature. For eg., Marsupials and Kangaroos. They are divided into seven different orders:

Also known as Monotremes, the sub-class Prototheria consists of egg-laying mammals. It has one order having 6 species

The scientists have also classified the mammals on a general basis which makes it easy to learn about the mammals and their distinguishing characteristics.

For more information on Mammalia, its characteristics and classification, keep visiting BYJU’S website or download BYJU’S app for further reference.

What are the major characteristics of mammalia?

These are warm-blooded, hairy living organisms with mammary glands to feed their young ones.

Why is dolphin a mammal?

Dolphin is a mammal because it breathes through lungs and has mammary glands. Moreover, it does not lay eggs and gives birth to its young ones.

How are the mammals classified?

Prototherians include platypus and echidna.