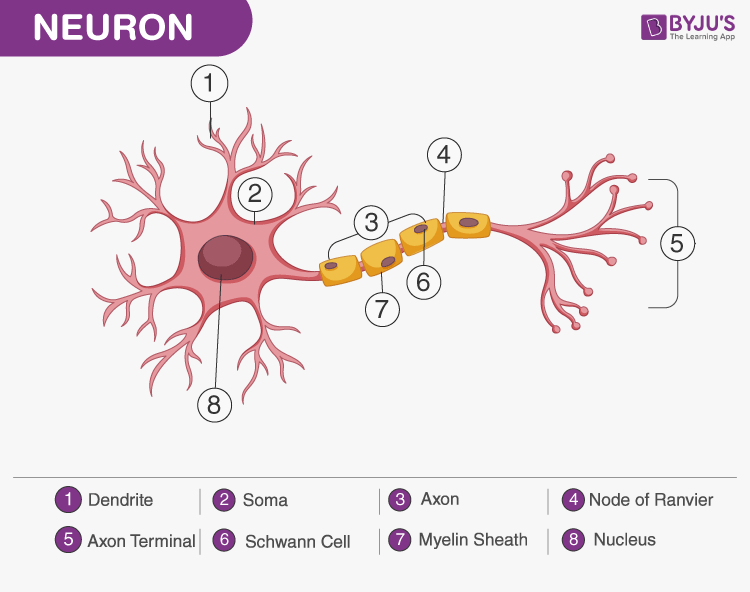 Dendrites are the finger-like cells present on the end of a neuron. They are short, branching fibres extending from the cell body of the nerve cell. This fibre increases the surface area available for receiving incoming information.

Dendrites are the receiving or input portions of a neuron. They are usually short, narrow and highly branched structures.

In neurons, these dendrites resemble a tree or branches of a tree, extending from the cell body of the nerve cell. The cytoplasm of dendrites contains Nissl bodies, mitochondria and other organelles. Dendrite provides an increased surface area for the reception of stimuli from the external world to the other neurons. Dendrite is the shortest fibre, which stretches out from the cell body of a neuron.

We all are born with at least 100 billion neurons. Dendrites grow out of the neurons when we listen to, write, talk about, practice something, etc. New dendrite takes some time to grow, as a lot of practice is required for new dendrites to grow. When a couple of dendrites grow together, a contact point is formed with a small gap and the name synapse knows this point. Messages are sent from one neuron to another neuron as electrical signals, which travel across the synapse.

According to studies and research, the more we practice, the size of the dendrites grows thicker with a fatty coating of myelin. Therefore, the thicker the dendrites, the faster will be the signals travelling.

With enough practice, the dendrites build a double connection. The faster, stronger and dual connections of dendrites last for a longer time, i.e. we remember what we learned. Thus, dendrites grow only when we are actively practising or doing something repeatedly.

Dendrites are about two μm in length and approximately 5 to 7 in number. They usually project through the soma and branch extensively. Thus, they typically form tree-like arborization around the neuron, called the dendritic tree.

Dendrites are the structures on the neuron, that function by receiving electrical messages. The functions of dendrites are to transfer the received information to the soma of the neuron. Other biological processes of Dendrites are:

Stay tuned with BYJU’S to learn more about Dendrites, their structure, functions and other related topics.