The human skeletal system works as a framework for the human body.

What is the Skeletal System?

This skeletal system can be divided into the axial and appendicular systems. In the human body, it is mainly composed of 206 individual bones, which are organized into two main divisions- Axial skeleton and Appendicular skeleton.

The skeletal system is the framework of the body, which is composed of bones called the skeletons. It provides a definite strength and shape to the human body.

The primary function of the skeletal system is the locomotion and variety of movements such as bending, climbing, crawling, jumping, running and walking.

Humans have 300 bones at birth, which is reduced to 206 as the baby grows old. Along with the locomotory organs, the skeletal system also functions as a protective organ for several vital organs including the heart, lungs and the liver.

This skeletal system can be divided into the axial and appendicular systems. In the human body, it is mainly composed of 206 individual bones, which are organized into two main divisions- Axial skeleton and Appendicular skeleton.

The size and shape of the bones in the human skeletal system vary and are unevenly distributed throughout the body.

There are more interesting and amazing facts about the skeletal system, few of them are discussed below point-wise.

Interesting Facts about the Skeletal System 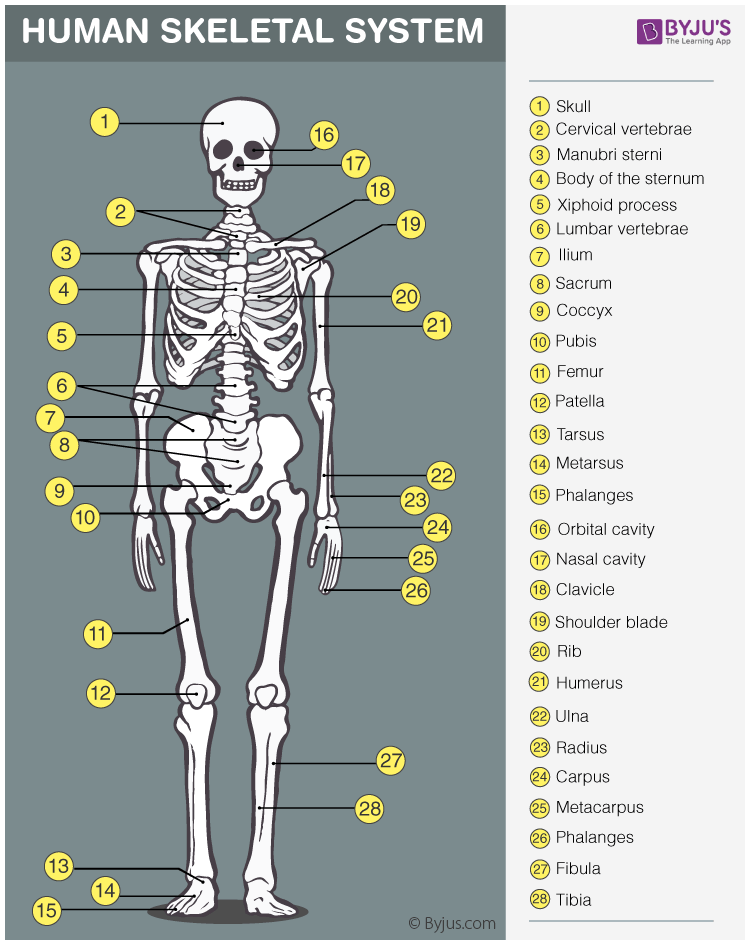 The skeletal system functions as the basic framework of a body and is the combination of all the bones and tissues associated with cartilages and joints.

Human skeleton system is composed of more than 200 bones. Each bone plays a very important role in maintaining the structure and functioning of the human body.

The human skull, ribs, shoulder blades are composed of flat bones, which are thin, curved, shaped and function by protecting internal organs and provide an anchor for muscles.

The entire human body is built around with a hard framework called the skeleton system. It plays a vital role in maintaining the overall shape of the human body.

The wrists and ankles are made up of short bones, which are equal in their length, width and thickness.

The skeletal system is also involved in the releasing of the synthesized hormones from the respectiveendocrine glands and also contributes to the regulation of blood sugar.

The skeletal system acts as a protective layer and protects the internal organs and the most delicate body organs, including the brain, eyes, heart, lungs and spinal cord.

The primary functions of the skeletal system include protection, movement, support, storage of minerals, production of blood cells and endocrine regulation.

The human face and the spinal cord are mainly composed of irregular bones and the sesamoid bones are found in the hands, wrists, feet, ears and knees.

Human hands and feet both comprises 106 bones. The human hand is composed of 26 bones each and a foot has 27 bones each.

The interactions and contraction between the skeleton system, muscular system and nervous system combinedly function as the locomotory organs in the body locomotion and movements.

Arms, legs, fingers and toes comprise long bones, which are longer, wider than and are cylindrical in shape. These bones are longer and they are the most movable parts of the body’s skeleton system.

The human skeletal system consists of 206 bones and also includes tendons, ligaments and cartilage that connect the bones.

Osteoporosis and Arthritis are a bone-related disorder, which reduces bone density and increases the risk of bone fracture.

These were a few facts about the human skeletal system. To know more about the skeletal system, its functions and other related topics and important questions, keep visiting our website at BYJU’S Biology.