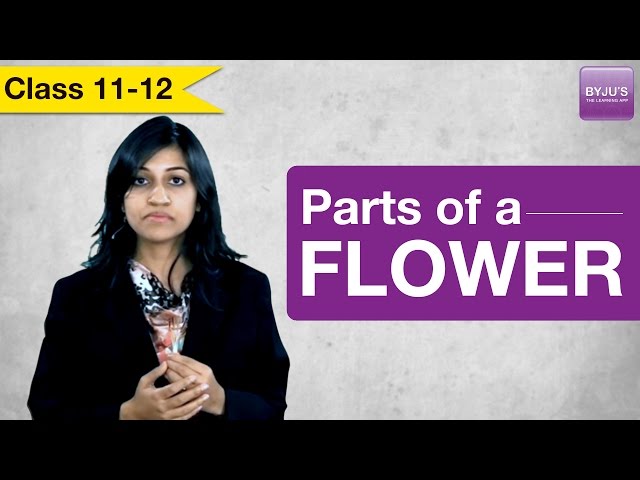 Flowers are the reproductive part of a plant. They are not only involved in reproduction, but are also a source of food for other living organisms. They are a rich source of nectar.

Flowers can either be

Let us have a detailed look at the different parts of a flower. 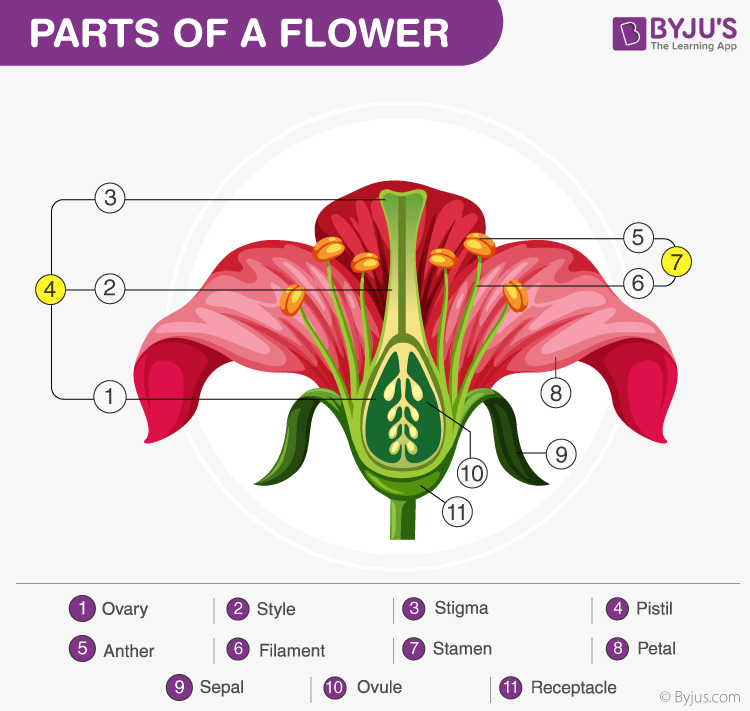 The different parts of a flower are mentioned below:

Vegetative Parts of a Flower

The vegetative part of a flower consists of the following:

Reproductive Parts of a Flower

In different plants, the number of petals, sepals, stamens and pistils can vary. The presence of these parts differentiates the flower into complete or incomplete. Apart from these parts, a flower includes reproductive parts – stamen and pistil.  A flower may have only female parts, only male parts, or both.

The reproductive parts of a flower consist of the following:

Along with the vegetative and reproductive parts, a flower is also composed of four whorls, which are largely responsible for the radial arrangement of a flower. A typical flower has a circular section with a common centre, which can be clearly observed and distinguished from the top of the flower. There are four whorls:

The calyx is the outermost whorl of a flower. It comprises sepals, tiny leaves present at the base of a flower. These protect the flower whorls against mechanical injuries and desiccation. Some plants have coloured sepals the calyx and are called petaloid.

If the sepals are free the calyx is called polysepalous, and if they are united it is called gamosepalous.

In many flowers, the sepals fall off before the flower even opens fully. Such sepals are known as caducous.

In some, the sepals fall off after fertilization. Such sepals are known as deciduous.

The persistent sepals remain up to the fruiting stage.

This is the second whorl of a flower. It contains petals which serve two main functions:

Petals are brightly coloured and scented to attract animals and insects for pollination. The calyx and corolla are collectively called the perianth.

Different forms of the corolla are found in the flowers.

Carpels The carpel is the fourth whorl of the flower present in the centre. The carpels contain the pistil, the female reproductive part of the flower. It comprises the ovary, style, and stigma. The egg or the ovule is present in the ovary. After fertilization, sometimes the ovary turns into the fruit to keep the seed. At the top of the ovary is a vertical structure called style that supports the stigma. The dispersed pollens stick to the stigma and travel down to the ovary through the style.

This was an overview of the different parts of a flower.

The important functions of flowers are mentioned below:

Pollination is the process in which the pollens are transferred from anther to stigma. The process of pollination can occur through a different medium.

The table mentioned below describes the different types of pollination along with their pollinating agents.

Also Read: What is Pollination

For more detailed information on parts of a flower, its functions and its importance, explore at BYJU’S Biology.

What are the important parts of a flower?

The important parts of a flower include:

Flowers reproduce by a process called pollination. In this process, the male gametes are transferred to the female ovules where fertilization occurs and ovules grow into seeds within a fruit.

What are the reproductive parts of a flower?

What are the vegetative parts of a flower?

Sepals and petals are the vegetative parts of a flower.