“Neurons are the fundamental unit of the nervous system.”

The length of a nerve cell can vary from nanometers to meters.

Our body is composed of millions to billions of nerve cells. Some nerve cells can be comparatively smaller by 0.1 millimeters or can be longer by 1 meter. The size of nerve cells is usually based on their functions i.e how long electrical impulse is transmitted within our body. They are found in the brain, spinal cord and peripheral nerves.

For instance, the nerve cell, which transmits the electrical impulse from our brain to the end of the toe finger may be the largest nerve cell. The size of the nerve cell even varies with the type of organism.

Let’s learn more in detail about the nerve cell and its functions.

What is Nerve Cell?

A nerve cell is also known as a neuron. It is mainly involved in receiving and transmitting information to different parts of the body.

Structure of Nerve Cell or Neuron

The nerve cell is a specialized and individual cell, which forms a nerve. Basically, the structure of the nerve cell comprises the following parts. 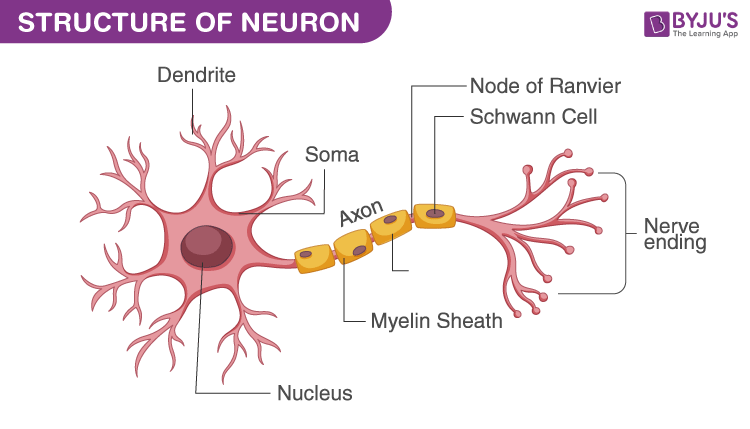 A branch-like structure that functions by receiving messages from other neurons and allows the transmission of messages to the cell body.

It is a tube-like structure, which functions by carrying an electrical impulse from the cell body to the axon terminals and by transmitting the impulse to another neuron.

Each neuron or a nerve cell has a cell body with a nucleus and other cell organelles including, the endoplasmic reticulum, Golgi apparatus, mitochondria and other components.

It is also called the nerve ending or nerve junction, which is mainly involved in permitting the entry of a neuron to move electrical signals from one neuron to another neuron.

The human body is composed of several different types of neurons, which function by facilitating the transmission of information through electrical impulses. Based on their functions, the neurons are classified into three types:

Neurons, which carry sensory impulses from sensory organs to the central nervous system (CNS) are called sensory neurons. There are about 9 to 10 million sensory nerves in the human body and are found in sense organs – eyes, ears, nose, tongue and skin.

Neurons, which carry motor impulses from the central nervous system (CNS) to specific effectors, are called motor neurons. There are about 50 to 60 thousand motor neurons in the human body and are found in glands and muscles.

This article concludes the introduction to nerve cells, their types, structure along with their functions. Stay tuned with BYJU’S Biology to learn more about the neurons, nervous tissue, neurons-nerve-impulses, their facts and other related topics.