The nucleolus is the distinct structure present in the nucleus of eukaryotic cells. Primarily, it participates in assembling the ribosomes, alteration of transfer RNA and sensing cellular stress. The nucleolus is composed of RNA and proteins, which form around specific chromosomal regions. 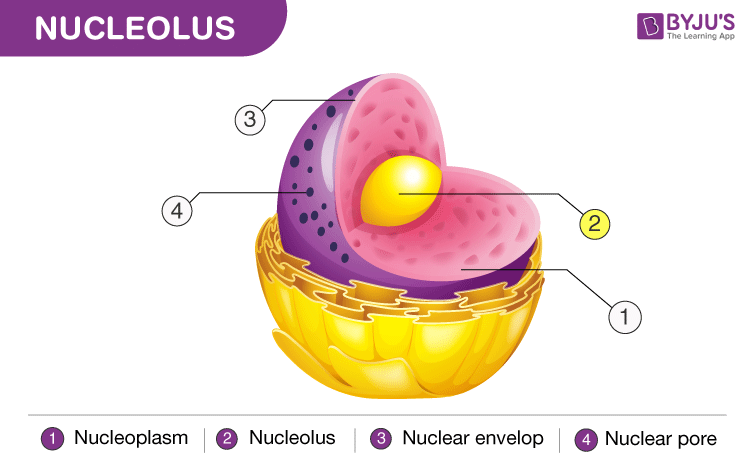 Structure of the Nucleolus

In eukaryotic cells, nucleolus has a well-ordered structure with four main ultrastructural components. The components can be further identified as:

The nucleolus of several plant species has very high concentrations of iron in contrast to the human and animal cell nucleolus.

Difference Between Nucleus and Nucleolus

The difference between nucleus and nucleolus is mentioned below:

For more information on nucleolus, its structure, function and the difference between nucleus and nucleolus, keep visiting BYJU’S website or download the BYJU’S app for further reference.

What is the function of nucleolus?

Nucleolus helps in protein synthesis and production of the ribosome in the cells.

Where is the nucleolus located in the cell?

What does the nucleolus contain?

The nucleolus contains DNA, RNA and proteins. It is a ribosome factory. Cells from other species often have multiple nucleoli.

Is nucleolus an organelle?

The nucleolus is an organelle, and a very unusual one because it is devoid of lipid bilayers, which are characteristic of other organelles.

What would happen if there is no nucleolus in the cell?

Test your Knowledge on Nucleolus!
Q5