Nucleoplasm is a type of protoplasm that is composed of thick fluid and constitutes chromatin fibres made up of DNA and usually found in the nucleus of the eukaryotic cells. This fluid contains primarily water, dissolved ions, and a complex mixture of molecules.

Its primary function is to act as a suspension medium for the organelles of the nucleus. 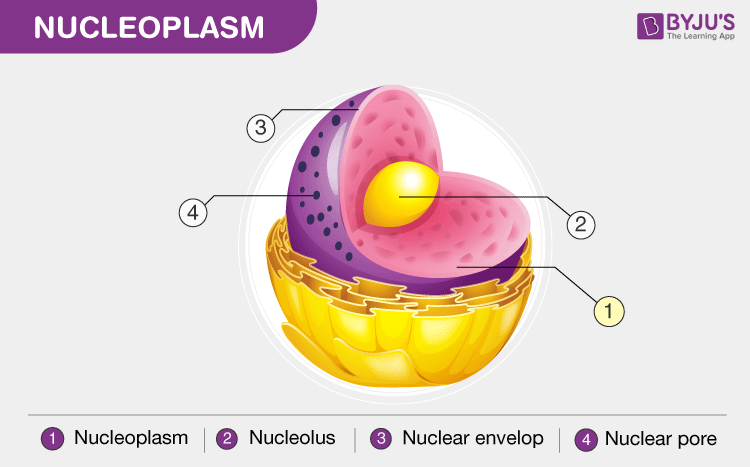 Nucleoplasm also called nuclear sap or karyoplasm. Other functions of nucleoplasm include the maintenance of nuclear shape and structure, and the transportation of ions, molecules, and other substances important to cell metabolism and function.

It is a highly gelatinous, sticky liquid that supports the chromosomes and nucleoli. A soluble, fluid component of the nucleoplasm is called the nuclear hyaloplasm.

Nucleoplasm is found inside the nucleus and resembles cytoplasm is some aspects. It is composed mostly of water, nucleoplasm also has an array of complex components.

However, the difference between cytoplasm and nucleoplasm is that nucleoplasm consists of such materials including nucleotide making them useful in the preparation of RNA and DNA and also the enzymes that influence the building reactions of DNA and RNA.

All these substances and components present inside the cell membrane together are considered as nucleoplasm and hence it comprises of the nucleus, cell fluids, and the organelles.

The principal function of the nucleoplasm is to program as a suspension substance for the organelles inside the nucleus. It also helps to maintain the shape and structure of the nucleus and plays an important role in the transportation of materials that are vital to cell metabolism and function.

The different components of nucleoplasm include:

It is the major production centre within the nucleus. The ribosomal subunits are produced here and pushed into the rest of the nucleus where they are processed into ribosomes. It is the largest organelle in the nucleus and the organisms will not be able to survive without the nucleolus.

Nucleotides are also found in the nucleoplasm. They are the building blocks of DNA and RNA. All the nucleotides consist of a base, a phosphate group, and deoxyribose sugar.

It is a complex of DNA, RNA and proteins that helps in the DNA folding. It prevents the entangling of the strings during DNA folding and improves the efficiency of replication. They are also associated with the processes of gene repression, gene expression and transcription.

It maintains the structure of the nucleus and is found all over the nucleus. It also helps in organizing the genetic material of the cells.

Difference between Cytoplasm and Nucleoplasm

The important difference between cytoplasm and nucleoplasm are as follows:

The processes that occur in the nucleoplasm include transcription, replication, necessary for the survival of a eukaryote.

To know more about nucleoplasm, its components, and the difference between cytoplasm and nucleoplasm, keep visiting BYJU’S website or download BYJU’S app for further reference.

It is a protoplasm type substance that is present throughout the cell body outside the nucleus. It is composed of a thick fluid and chromatin fibres.

What is the main function of nucleoplasm?

It supports the chromosomes and the nucleoli. It serves as the suspension substance for the organelles inside the nucleus.

Do animals cells have nucleoplasm?

Yes, the animal cells contain a nucleoplasm. It functions as the cytoplasm of the cell.

What is the function of chromatin?

The chromatin packages the DNA into a small unit such that it fits into the nucleus. It also protects the DNA structure and sequence. It controls gene expression and replication and prevents chromosome breakage.

What is the difference between cytoplasm and nucleoplasm?

Test your Knowledge on Nucleoplasm!
Q5