The Pituitary gland, also known as the hypophysis, is a pea-sized endocrine gland situated at the base of our brain. It is often referred to as the ‘Master Gland’ because it produces some of the important hormones in the body. It is situated in a bony structure called the Pituitary fossa, just below the hypothalamus, close to the optic nerve. The pituitary gland is divided into three parts, also called lobes:

A healthy adult human’s pituitary gland consists of two parts – the Anterior and the Posterior parts. The Intermediate pituitary regresses during gestation and is absent in adult humans. Following are the major functions of hormones:

The anterior pituitary is responsible for the synthesis and secretion of several key hormones in the body. These hormones include:

Human Growth Hormone (HGH): Responsible for the growth and repair of all cells in the body.

Thyroid Stimulating Hormone (TSH): Influences the thyroid gland for the release of thyroxine, its own hormone. TSH is also called Thyrotropin.

Adrenocorticotropic Hormone (ACTH): Influences the adrenal gland to release of Cortisol or the “stress hormone”. ACTH is also known as corticotropin.

Prolactin (PRL): Produces milk in the breast. Though it is present at all times, the secretion is increased during and just after pregnancy.

Melanocyte-Stimulating Hormone (MSH): Involved in the stimulation of the production of melanin by skin and hair. 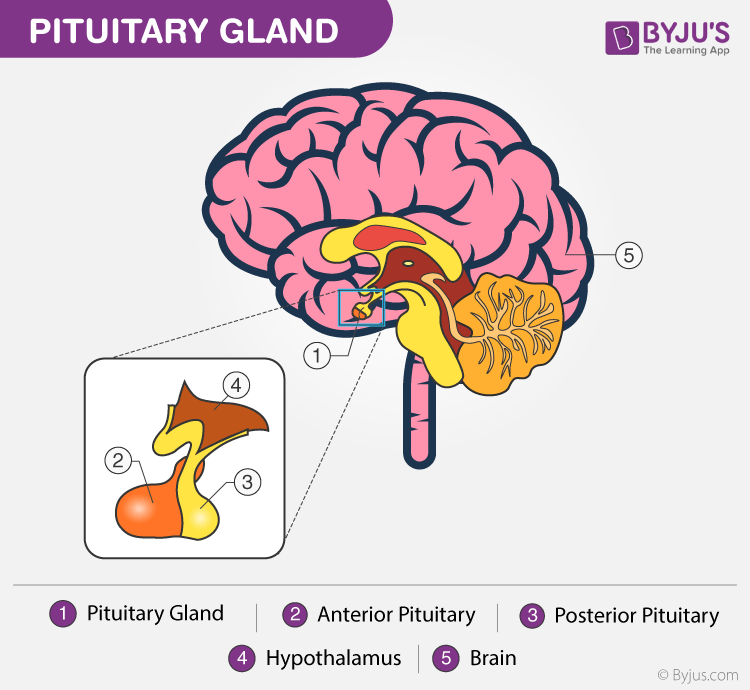 The posterior pituitary is responsible for the storage and secretion of two very important hormones:

Antidiuretic Hormone (ADH): Controls the water balance of the body by affecting reabsorption of water by the kidneys

Oxytocin: Controls certain aspects of pregnancy and childbirth such as uterine contraction and production of milk.

Pituitary disorders affect the functioning of the pituitary gland, increasing or decreasing the level of certain hormone secretion. This generally happens because of a non-cancerous tumour called the pituitary adenoma.

A Pituitary macroadenoma (tumour larger than 10 mm) can also cause the impairment of blood supply into the gland. It can either cause overflow or stop the flow of blood completely into the gland. This is called pituitary apoplexy.

Stay tunes with BYJU’S Biology to learn more about Pituitary gland, its functions and other related topics.